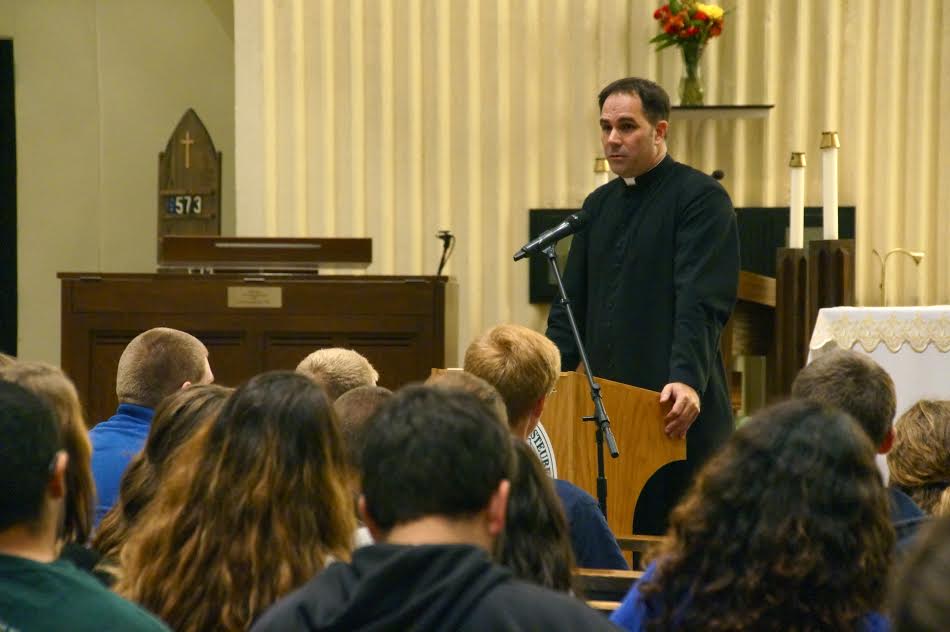 Author and speaker the Rev. Don Calloway, M.I.C., gave a talk on the Blessed Virgin Mary on the evening of October 1 at Christ the King Chapel.

Calloway attributed true forgiveness and restoration with God to the intercession of Mary. He cited his own life as an example. “I’ve been mercified,” he said. “If not for Our Lady, I’d be toast.”

Calloway addressed the typical Protestant complaint about Marian veneration: “Aren’t you for-getting Jesus?” with praise of his own mother. “My mom is a gift … You can’t hang out with me when you’re dissing my mom. Jesus is not a phantasm … He loves His mom.”

“We owe everything to the Blessed Virgin,” Calloway said, warning that Satan especially hates her because of the prophecy in Genesis 3:15. “Once you lose the Virgin, you will lose Christ,” he said.

He continued on with a description of how God had and took the opportunity to create his own woman, to be mother, bride and daughter. God did so to the degree of perfection, said Calloway, because why wouldn’t he make the most important woman in history less than perfect?

Calloway referenced the Marian devotions of St. Louis de Montfort and St. Maximilian Kolbe. “No one who does not seek to emulate Mary can become beatified or canonized,” he said.

Calloway also addressed the importance of the sacrament of confession and saying the rosary daily, before a closing analogy to chess. Like a chess queen, Mary is the most mobile piece on the board. “Just one bishop and the queen can take out the enemy in four moves,” said Calloway.

He noted that chess was a favorite game of St. Maximilian Kolbe, Pope St. John Paul II, and St. Teresa of Avila for its Catholic symbolism.

Calloway will return to campus in a month to speak on the rosary and promote his new book, Champions of the Rosary: The History and Heroes of a Spiritual Weapon.