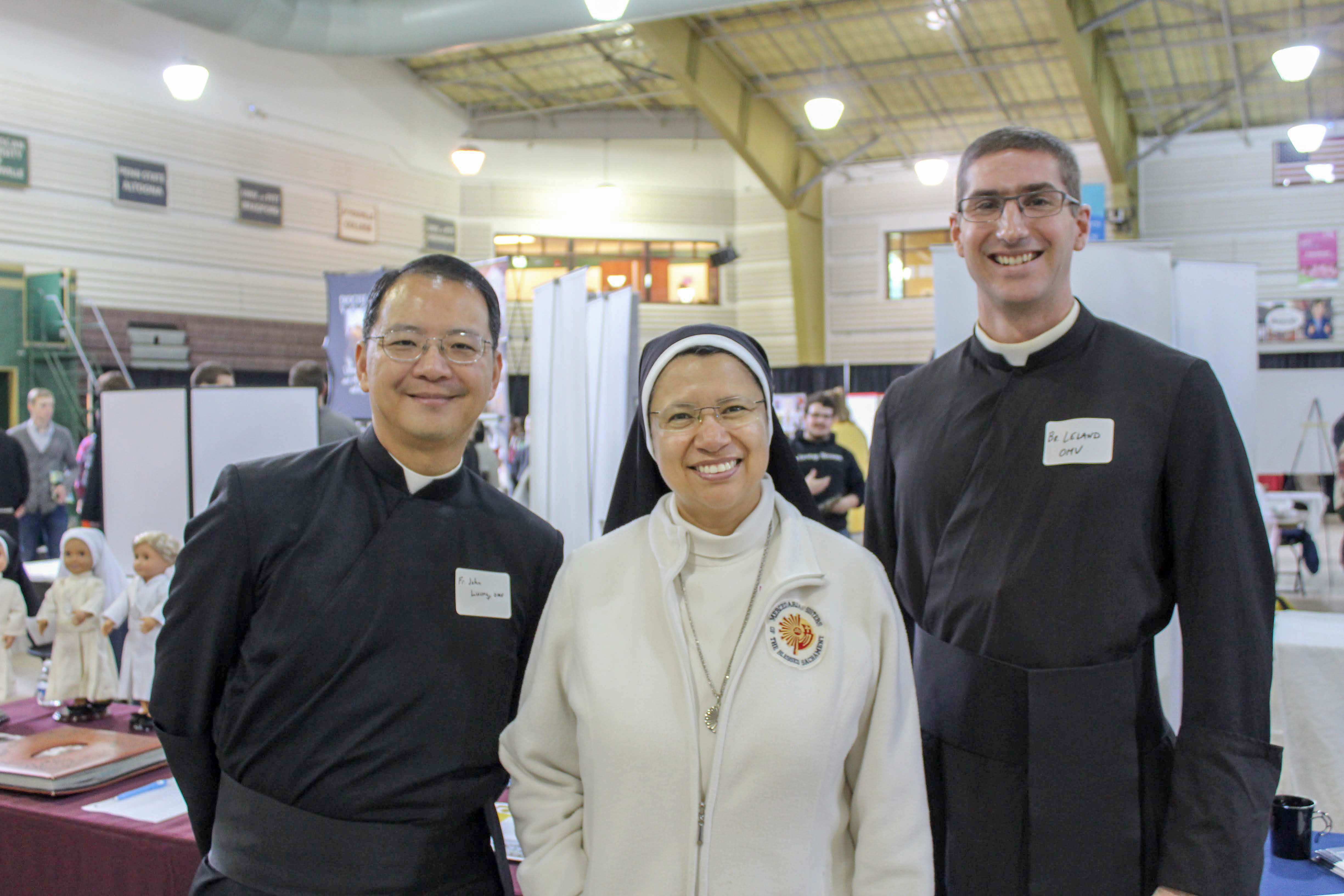 On Oct. 12, Franciscan University of Steubenville hosted representatives from dozens of religious orders during the annual Vocations Fair in the Finnegan Fieldhouse from 9 a.m. to 4 p.m.

As visitors approached the event, they were greeted by the hubbub of joyful conversation as students mingled with the religious, gaining new insight into the plethora of represented orders and forming relationships to aid them on their vocational journey.

Walking around the fair, students could “trick-or-treat” early at tables stocked with prayer cards, candy and brochures. Many of the booths presented unique, Catholic curiosities ranging from dolls in habits to a life-size cutout of St. Therese of Lisieux to a photo cutout board offering the opportunity to pose in the habit of a Sister of St. Joseph the Worker.

The main attractions and highlights of the event, however, were the infectious love and joyful smiles of the religious sisters, brothers and priests. Mirroring the abundance of charisms found in the Catholic faith, the vocations fair brought together representatives from a wide variety of religious orders, such as the Discalced Carmelite Friars, Little Workers of the Sacred Heart, Capuchin Friars and Poor Clares.

Also present were various dioceses, such as the Dioceses of Bridgeport and Savannah, which came to promote vocations in their area, as well as Franciscan University’s own TOR brothers and sisters and the Priestly Discernment Program.

Students and visitors alike were grateful for the opportunity offered by the event to form new connections and gain exposure to the richness of vocational life.

Sister Peter Marie Chrismer, OP, the vocations director for the Dominican Sisters of St. Cecelia, expressed her gratitude toward the university for hosting the event: “I think that it’s a beautiful thing that every year Franciscan University hosts this vocations fair … that they know that that’s something that’s important to offer to the students.” Describing the fair as “a gift,” she said, “I think the best part about it … is getting to talk with the students and making connections and having those encounters and good conversations.”

Franciscan students agreed. Senior Therese Drake said, “I think that the vocation fair was just a beautiful opportunity to get to see brides of Christ and priests … because I was not exposed to religious life growing up, so it was really beautiful to see all the beautiful vocations that come out of the Catholic Church.”

Shannon Wieszczek, sophomore, summed it up saying, “It’s so great to see all the different orders that come here … It’s really good that Franciscan … offers this opportunity for its students to discern … their vocation and religious life.”