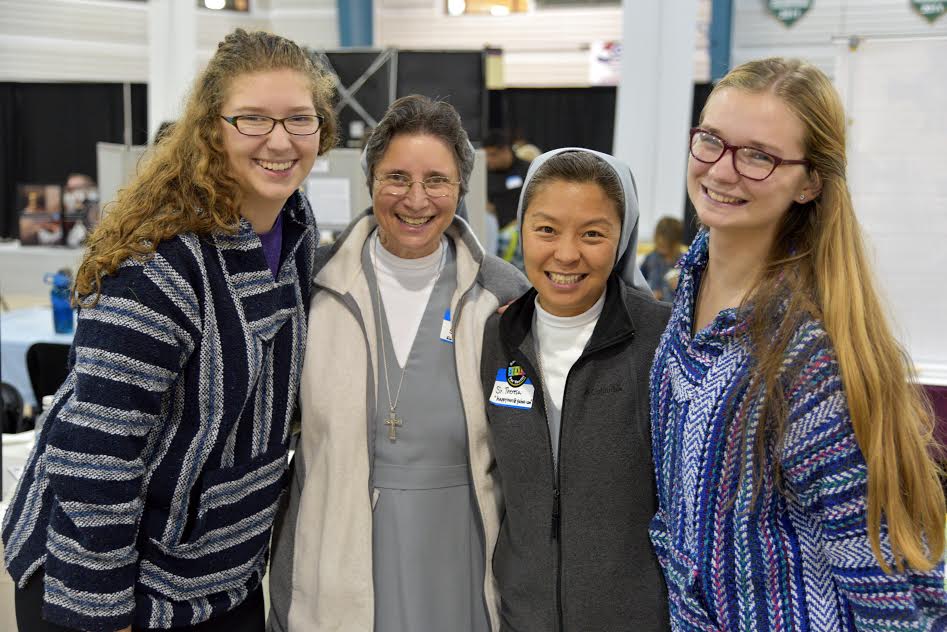 The Finnegan Fieldhouse was overflowing with men and women in religious habits on Friday, Oct. 14 for the annual Vocations Awareness Fair.

Especially notable of the orders at the fair were the Youth Apostles and the Poor Friars and Nuns. The Youth Apostles, a mixed-gender order based out of the Diocese of Arlington-Richmond, focuses on youth ministry, especially to high school students in Catholic parishes.  All members are laity, whether married, single, or consecrated.

In the words of Jonathan Mundell, an alumnus of Franciscan and a consecrated Youth Apostle, being a consecrated layperson is “similar to (being) a religious brother” since they take the same vows of poverty, chastity, and obedience.

However, Mundell emphasized that as a consecrated layperson, he has a “focus on evangelizing out in the world,” and he also noted that his order has no habit.

On the life of a consecrated layperson, Mundell also mentioned that since one should “be witnessing to God and faith,” he may have a job in society, such as an “engineer, doctor, or lawyer.”

As for the Poor Friars and Nuns, they are a group of friars and sisters who blend Carmelite prayer and Franciscan evangelization, according to their representative the Rev. Antonio Maria Speedy.

Speedy’s order is one that has a working convent and monastery, but its non-cloistered members may evangelize out in the streets, “drawing people to the sacraments of Communion and confession,” said Speedy.

Junior Thomas Nimmo, a member of the Priestly Discernment Program (PDP), said that he was interested in the Poor Friars, having read about them when he was younger.

Nimmo emphasized, however, that he is not absolutely set on joining the Poor Friars, but he is “definitely open to joining a religious order” someday.

Orders represented included the Dominican Friars (both East and West U.S. Provinces), the Franciscan Friars Third Order Regular, the Spiritans, the Dominican Sisters of St. Cecelia (based in Nashville, TN), the Missionaries of the Precious Blood, the Poor Friars and Nuns, the Barnabite Friars and Brothers, Youth Apostles, and the Sisters of the Holy Cross.

Sophomore Mike Santos, also a member of the PDP, enjoyed the sampling of orders, noting that for him, it will be a “really fun next couple of months going to clemency retreats.” A clemency retreat, in Santos’s words, is a discernment retreat in which a person “goes to the motherhouse.”

Even those not discerning a vocation to religious life or the priesthood attended and benefited from the vocations fair.

Sophomore Jim Mello found the buffet of orders “really interesting,” even though he is not discerning a religious vocation right now. Mello enjoyed “hearing about the different ministries of the Church, and how God is using different communities and charisms for his work in the world.”