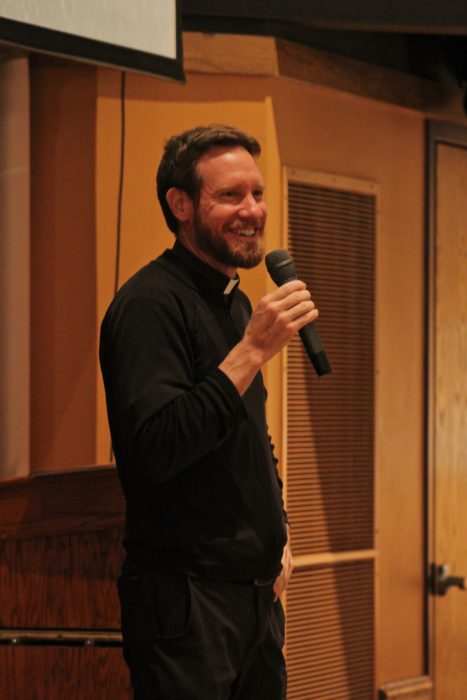 A guest speaker educated students, alumni and parents about the strength of Marian consecration as exemplified by St. Maximilian Kolbe, in a talk in the Gentile Gallery Oct. 3.

The Rev. Michael Gaitley began the presentation by talking about how Kolbe was a great apostle of Marian consecration. Kolbe had a loving intensity that was strengthened by the Virgin Mary. When he discovered Marian consecration, he sought to spread it, and in his eyes, it was how he could give the greatest glory to and win the whole world for God.

Kolbe and a group of friars started a magazine called “Knights of the Immaculate,” which reached about one million people each month in the late 1930s. He wanted to bring the readers closer to Our Lady because she wanted to walk with them through their suffering, Gaitley explained. Kolbe led the largest push for Marian Consecration during that time, which prepared Poland for World War II.

Gaitley said there is a now big push for Marian Consecration in the U.S. to prepare Americans for suffering or for much grace.

The essence of Marian consecration is to let Mary into the home of our hearts, Gaitley said, where she consoles us just as she consoled Jesus on the cross. “She is a mother of mercy,” said Gaitley, “who sends her children to be a light of mercy to those most in need, most hurting.”

Gaitley told the audience that Marian Consecration allows Mary to bring us to Jesus, the fountain of mercy. Mary helps heal the wound made by original sin and bring us to Jesus as the secret weapon of God.

Gaitley quoted Kolbe, saying, “Our little, little mother, the immaculate Mary, can do everything for us. Turn to her. We are her children. I tell you in her name she loves every one of you very much and at every moment with no exception.”

Freshman Martha Marie Myer said the talk had an impact on her. “I have done the Marian Consecration before, but the talk reinvigorated my desire to be a saint,” Myer said.

The talk was sponsored by Gaudete in Via Crucis household.