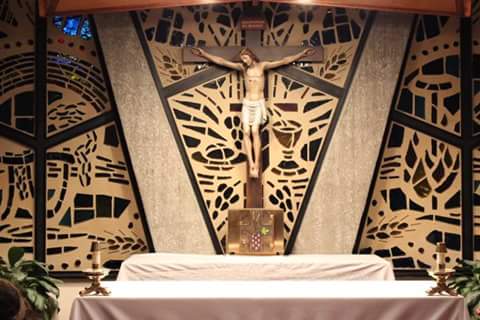 The tabernacle currently sits in the Eucharistic Chapel to the side of the main sanctuary.

“Having the tabernacle at the center of the church is the traditional way you would see in Gothic and baroque church(es) and is now the current practice of construct in the church,” said the Rev. Shawn Roberson, TOR, who serves as university chaplain, in an email interview. “It would be difficult to do this in Christ the King due to the structure and lay out of the church.”

Roberson said that Christ the King Chapel was built in the late ‘60s when more churches placed tabernacles to the side of the sanctuary.

“There was a particular theological emphasis of ‘table theology’ where the people would gather around the altar to be ‘fed’ by the Lord as His body,” he said. “Hence you notice the ‘fan out’ quality of the main chapel in Christ the King. At that time the tabernacle was seen as the place of reserve for the sacrament where a side chapel was the normative construct and placement.”

Abbey Thompson, a sophomore theology and catechetics major, hopes to see the tabernacle in the center of the church.

“I think it helps me focus better,” said Thompson, “when you are looking, kneeling down, you’re looking at exactly what you’re receiving; you’re looking at what you are celebrating. (God) doesn’t want to be hidden behind a curtain away from everyone; he wants to be front and center with us, and close to us, so I think moving the tabernacle would help us understand that and appreciate that.”

​ Jacob Konkolics, a sophomore theology and catechetics major and co-head of sacristans, said, “When you enter the church, the first thing you recognize is the true presence of God, and that’s found in the tabernacle. … We have to understand why we do what we do, and who …  we do it to … by putting Christ in the center of the church, it gives us a direct line to why, and by entering church and not knowing the why, that is, entering church and not knowing what the tabernacle is, you lose that purpose.”

A bill to advise the chapel to relocate the tabernacle was recently the subject of a very tight vote down by the Student Government senate.

“It is currently the priority of Franciscan to build an entirely new chapel which is being planned at this time and as such the placement of the tabernacle in the center of the chapel will be made much more feasible than it would in current chapel,” said Roberson.