Ultimate Frisbee team on FIRE for the sport 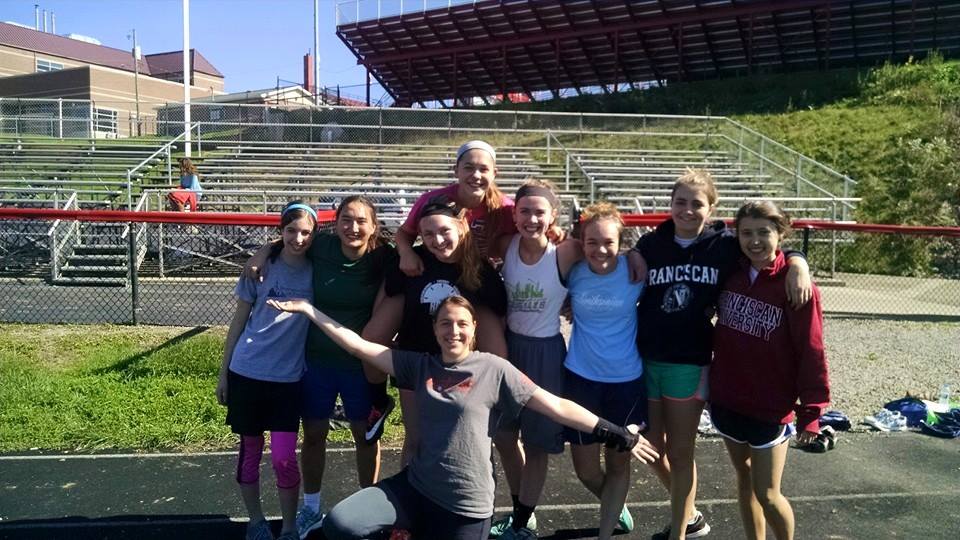 Holly Koch, founder and president of the team, came to Franciscan in the fall of 2014 hoping to start a women’s Ultimate team. She played Ultimate all through her high school career in Cincinnati, Ohio, and thoroughly enjoyed the experience.

Koch said, “I loved the sport and knew that once I graduated (from high school) I would miss it a lot.”

Her older brother, Tommy Koch, started the men’s Ultimate Frisbee team, Franciscan Fatal, when he first came to Franciscan, so Holly Koch was able to get some helpful tips from him.

“These kinds of things do not succeed overnight,” she said. “I knew for sure I would do whatever it took to get something going. I saw such a high potential for a girls’ team.”

The team name, FIRE, stands for “fearless, intensity, relentless, excellence.” It was chosen by Koch, with the help of captain Anne Pivarunas. The name comes from the Bible verse Hebrews 12:29, “For our God is a consuming fire.” This verse is the motto for the team, and will be printed on the sleeve of the team’s jerseys, to always remind them to see Ultimate not only as a sport, but also as a way to bring glory to God.

The team does not only consist of players and captains. Behind the scenes, other people contribute to the success of the team. One of these is Ron McNamara, the coordinator of Student Leadership Development. Koch and Pivarunas talked extensively with McNamara in the beginning stages of forming the team, and Koch said he was extremely helpful.

“He helped me through the entire process of getting (the team) approved and he was very thorough in making sure I knew what to do,” Koch said.

FIRE kicked off this season with its first practice Sept. 13, and competed at its first competitive tournament at the end of October. Even though the team this season was composed of half returning players and half new players, this did not stop captains Pivarunas and Alicia Paddock from working right from the start to forge a team strong in both skills and friendships.

New player Veronica Easterday said that the sport goes beyond just learning the skills. She wanted to be with a group of girls she enjoys. “All the girls … are really a team. I don’t feel like there is any drama on the team,” she said.

In fact, it is the friendly team that seems to draw many players to FIRE. Returning player Maria Brandell said, “Ultimate is a very friendly sport. It’s just so good.”

Brandell says that the friendly atmosphere is one of her favorite parts of Ultimate. Similar to Koch, Brandell played Ultimate in high school, switching from field hockey in her junior year. She said has never regretted that choice.

Pivarunas, who took on the role of captain this year, was also instrumental in starting the team. She was involved from the beginning, helping Koch with the necessary paperwork and meetings in order to start the club.

Unlike Koch and Brandell, Pivarunas did not start playing Ultimate until college. That did not stop her from thoroughly embracing the sport, she said.

In regard to goals for the team, Pivarunas wants to keep building, in numbers and skills. She said that she wants to “start out being competitive and going to Regionals,” one of the upper-level tournaments for college teams.

One of Koch’s goals is making it to the toughest tournament at the college level, Nationals. Fatal, the men’s team, competed in Nationals the past two years, and placed first in 2014. Koch and Pivarunas hope to follow in the footsteps of the men’s team and make it to Nationals either this coming spring or next. Their goal right now is simply to qualify. Then, Koch said, the team can worry about winning.

Koch definitely thinks they have that potential, as she said, “All of the girls on our team are so talented and each of us individually really improves with each team practice, so I’d say we all definitely have the potential to become Nationals athletes, maybe even Nationals champions.”

The team members of Franciscan FIRE are aiming for College Nationals, but that is not their only goal. FIRE, as a team, is not focused solely on winning games and tournaments. One of the core purposes of the team is to provide a balance between the numerous aspects of life, including academic, athletic, spiritual, and more.

FIRE does not want the players to focus on Ultimate Frisbee alone, but instead to have a wide variety of experiences, with Ultimate being one of the highlights. Easterday summed it up well: “I need that physical, spiritual, mental balance, and (FIRE) has given me that opportunity.”