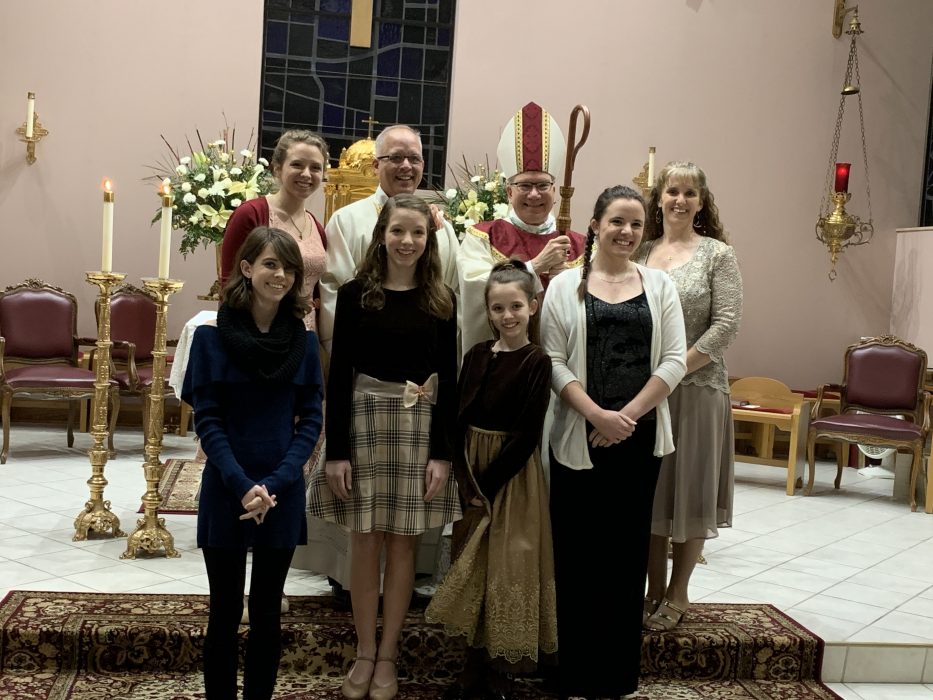 Ask the Rev. Drake McCalister about his journey to the Barque of Peter and he will first tell you a story of a ship. It happened when he was a Pentecostal pastor, the speaker at a Protestant summer camp. The director of the camp told him a story of a vison he had of McCalister standing on a seashore, observing a cruise ship named The Queen Mary. The director looked at McCalister and said, “Maybe you’re supposed to have something to do with the Catholic Church.”

Catholicism was never on McCalister’s radar. Born into a solid Pentecostal family in the International Church of the Foursquare Gospel, McCalister graduated high school with no plan and uncertain of everything except the fact that he did not want to go to college. After a year of specific prayer for discernment, the Lord called him into full time ministry.

After being ordained in his church, McCalister spent 13 years as a pastor on the west coast, four years in California and nine in Seattle. It was in Seattle, while commuting to his church, that McCalister turned on the radio. The station was EWTN. The program was the newly created Catholic Answers Live.

“The radio was great because I didn’t have to see Catholicism, I could just hear about it. The visual aspect would have been a total turnoff,” McCalister said. Pentecostalism is a religiously simple denomination, according to McCalister.

This began a five-year process of listening to the radio and slowly being drawn to the Church. One of the biggest aids in McCalister’s discernment was the writings of the early Church Fathers.

On the experience of reading early patristics, McCalister said that “Catholics take the words of Jesus at face value (while) I was always the one trying to explain away the words of Jesus. Once I saw the early church and the early Church Fathers, how they lived, what they taught and how that was consonant with Scripture, and that it was the same as what the Catholics taught today, it led me to a final conclusion of one of two choices.”

“Either that it is a grand conspiracy theory, (and) that after the death of the last apostle, the faith died and was lost and was later restored by pick your reformer … or what was going on in 200 A.D. really is the Catholic Church, and if that is Christianity and I have said yes to Jesus, then that is where I have to be. My desire is not to be Catholic; my desire is to follow Jesus Christ.”

In the summer of 2004, McCalister resigned as a pastor in the International Church of the Foursquare Gospel, and on Dec. 12, 2004, he and his wife and three daughters (now five) were received into the Catholic Church.

His journey was not finished there, however. His primary call to full time ministry remained. In 2009, he entered into formation for the permanent diaconate in the Diocese of Steubenville. During his first year in formation, the Holy Spirit called him to ask Bishop Daniel Conlon if he would qualify for the dispensation from priestly celibacy that is sometimes offered to Protestant clergy converts. Conlon was amenable to the idea and the long road to priesthood began.

The dispensation was given and McCalister was ordained to the Catholic priesthood on Dec. 19, 2019.

McCalister doesn’t miss anything about Pentecostalism. “After internally deciding to become Catholic, I went to one more pastors’ conference … and thought ‘I’m done.’ I came into the Catholic Church realizing that most of what I loved about what I was raised in, I get to keep,” McCalister said. “Many of those things are not contrary to my Catholic faith. Everything is in the Catholic faith in a more balanced way.”

For those who want more information about McCalister’s conversion or about how a married convert was ordained to the priesthood, McCalister has a website which can be found at www.thattheymaybeone.org.