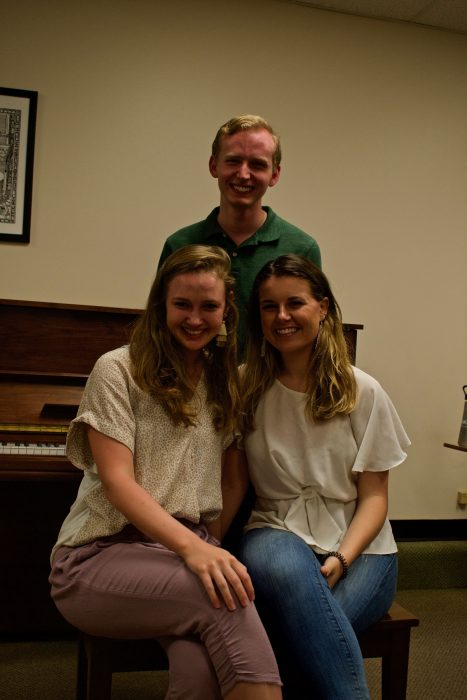 After a brief hiatus, the Franciscan University Musical Theatre Troupe (FUMTT) is bringing new passion and talent to the stage this fall for its fifth musical performance.

FUMTT originally began as a “Musical Revue,” giving students the opportunity to participate in musical theater, which is not offered under the school’s theater department. Students performed hits from various musicals for the group’s first performance in the fall of 2016.

The group went on to establish itself as an official club, and FUMTT offered its debut show, “Into the Woods,” in the spring of 2017. Since its founding by Patrick O’Brien, Matt Wagner and Suzannah Evans, FUMTT has performed a musical each semester except the spring of 2019. The group now prepares to return to the stage this fall for a production of “Godspell.”

Cathleen Sanborn has been a member of the group since its first official musical her freshman year and is now the current president of the troupe. “I think that there are just so many people on this campus who love musical theatre,” she said, so the troupe provides a good opportunity for students to act, sing and dance outside of the theater department’s main stage play.

Sanborn explained that FUMTT draws students because “(for) people who love musical theatre, and even maybe people who don’t, it’s such an outlet for them.”

“It’s such a good form of self-expression and such a release. It’s really powerful. It’s a chance to use your gifts and your talents … just to express,” she said.

Along with the creative outlet, FUMTT fosters the unique friendships that comes from being in a focused and fun environment.

“The community that it builds is really remarkable because it’s such a place of expression and release that the bonds that you make there are really special,” Sanborn said. “Everyone’s doing the same thing; everybody’s in the same boat.”

The troupe has their share of inside jokes and traditions. For example, “whenever we give notes at the end of a show, we made up a song, and we sing a song called Time for Notes,” Sanborn said. “We all sing it together, and it’s just funny.”

Actors with any level of experience are welcome to audition and join the community. The time commitment is kept to rehearsals Tuesday and Thursday nights in the St. Joseph Center and Saturday mornings in the aerobics room.

“We do typically four performances,” Sanborn explained. “It’s all in one weekend: a Friday, two on Saturday and then a Sunday performance.”

FUMTT’s past performances have included “She Loves Me,” “You’re a Good Man, Charlie Brown” and “Seussical.” However, Sanborn is especially excited about this semester’s musical.

“‘Godspell’ isn’t like any other musical because it is a proclamation of the Gospel,” she said. “I’m so excited for it because I really think the Lord is going to bring revival through this show. I think that it’s really going to touch people; it’s beautiful.”

Lovers of musical theater can expect great things from the return of FUMTT as its members revive the passion and talent they have always brought to the Franciscan University stage.