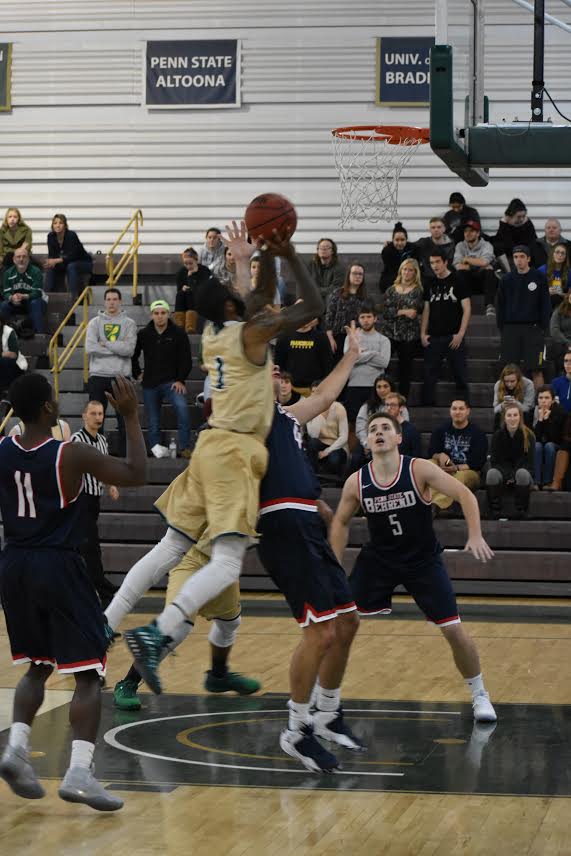 The Barons started the game in the lead after a steal by junior guard Garrison Holmes, who then took the ball down the court for a layup. Franciscan succeeded in forcing several turnovers in the first few minutes, giving them the opportunity to start off the game with a score of 4-0.

However, the Lions were quickly able to take control, leading 20-9 in the first 10 minutes due to their solid three-point game.

The Barons continued to persevere and regained energy when junior guard Keoni Sablan took a powerful charge, in the next play drew a shooting foul, and making both free throws. Then, with two minutes remaining in the first half, sophomore forward Juwan Perkins made a heavily contested three-point shot.

The first half ended with Penn State Behrend in the lead by a score of 44-19.

The Barons started the second half re-energized and ready to compete, when senior guard Derrick David quickly sunk a three point jump shot. Within the first three minutes, the Barons managed three steals, the first of which was followed by a layup from Perkins putting the score at 46-24.

Despite the Lions’ strong lead, the Barons continued to play aggressively, with freshman Josh York and Perkins drawing several fouls in the paint. However, the Lions held their lead for the rest of the game.

“That game was rough, but we’ve got to focus on the positives and get better,” said freshman forward Nick Mersch after the game.

Head Coach Joe Wallace commented on the team’s mentality saying, “Our schedule has been really testing us, and part of this schedule will either break us or make us stronger …. We are taking punches and we are going to keep moving forward without a doubt.”

Throughout the game, the Barons were able to limit their number of turnovers to 10 in comparison to the Lion’s 15.

Wallace has high hopes for the team’s future saying, “We played the number one team today, and yes, the numbers are pretty far away, but I think in two or three years we can be one of the top two or three teams in the conference.”

The Barons’ next home game is against Penn State Altoona on Wednesday, Dec. 7 at 8:00 p.m.