Theater mainstage to demonstrate power of beauty, art with plenty of comedy 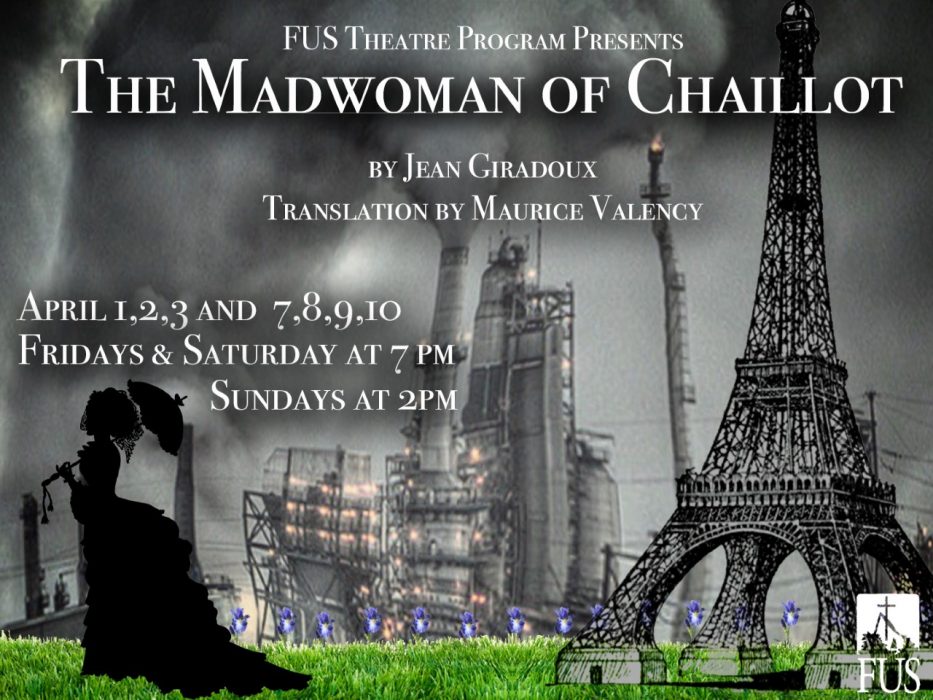 The constructions of an underground sewer prop, a creepy doorway to hell and a French café are busily underway in Anathan Theatre as the Franciscan University of Steubenville theater department brings a spring production full of drama, tragedy and comedy in post-World War II France to the mainstage.

Written by Jean Giraudoux immediately after the end of the Nazi invasion of Paris in 1945, “The Madwoman of Chaillot” tells the story of a group of societal outcasts who stand up against evil industrialists to protect the beauty of Paris from being blown up for oil.

“These are not the kind of people you’d think were the heroes of a play,” said director John H. Walker, who holds a masters of fine arts in acting. “They’re not the prettiest, they’re not the best dressed, some of them don’t have any money. … But they’re the ones who still see beauty in the world. They’re the ones who can see a sunrise or a flower and realize that’s a love note from God.”

The Madwoman, who leads the group of defiant outcasts, lives in the basement of a decrepit house that is above the Paris catacombs.

“She’s so harmless and she’s so good, she’s not a dangerous character at all,” Walker said.

However, the woman has discovered that she can trap all of the industrialists in the catacombs so they won’t return. She must decide if she can come to terms with killing people for the sake of beauty.

The fine arts have been a center point in every phase of the Catholic Church, Walker said. The play asks the question: to what extent do people need to protect beauty?

“Since beauty is a bridge between our realm and the divine realm, the Catholic Church has been using beauty for thousands of years to help people grow closer to Christ,” he said.

Walker said he chose “The Madwoman of Chaillot” for the spring mainstage because it exemplifies how art and beauty are necessary to understand life more fully. While many places view the arts as an unnecessary luxury, Walker said Franciscan has a respect for the arts that he appreciates.

“It made me think about the other places I’ve been … where the arts are just kind of frivolous, they’re the first thing to cut, and STEM has to take over.”

Walker said he wanted to do a play about real people looking below the surface of their everyday lives. Everyone has a side to their life that goes unnoticed, he said.

In the character cast, each person is listed by occupation rather than name. Walker said this reflects a tendency to see people only for what they do and not for who they are.

“In the world, we stop looking at people as people,” he said.

While there is tragedy and drama in the play, it will also include a healthy amount of comedy because “that’s how I direct,” Walker said.

“When you see a play, there’s got to be a moment where you get so involved you forget that you’re watching a play,” he said. Walker said he achieves this through comedy.

“If I can make you laugh and then immediately turn something around that’s sensitive and dramatic, then I can snag you. Because usually when people laugh, they take down their guard.”

The play includes many difficult themes, with characters who have advanced dementia, people who are institutionalized or dying and people who have lost everything in their lives and see no other option than suicide.

As the industrialists contrive their plots of destruction, the Madwoman plans to have all these people killed.

“That’s a real gray area,” Walker said. “How do you do that and still consider yourself doing something right? I don’t know if that’s possible. (The play) raises a lot of questions. … I’d like people to walk out asking was she right or was she wrong, talking about how things happened in this play. … I like people to be interested in discussing that. Because I’m not going to put a label on it myself.”

Walker hopes the audience takes away a very important lesson from the play: the beauty God has given to the world is a reminder of his love for everyone.

“If we don’t take time to make ourselves available to that beauty, because we’re so busy, we miss that love note,” he said. “I think if that’s one of God’s calling cards and we’re not paying attention to it, our life is less than it could be.”

The cast of the play includes over 30 student actors, with many non-theater majors participating.

“Everyone should have a chance in their time at Franciscan to experience student theater,” Walker said.