The man who tells the story of Franciscan through various mediums 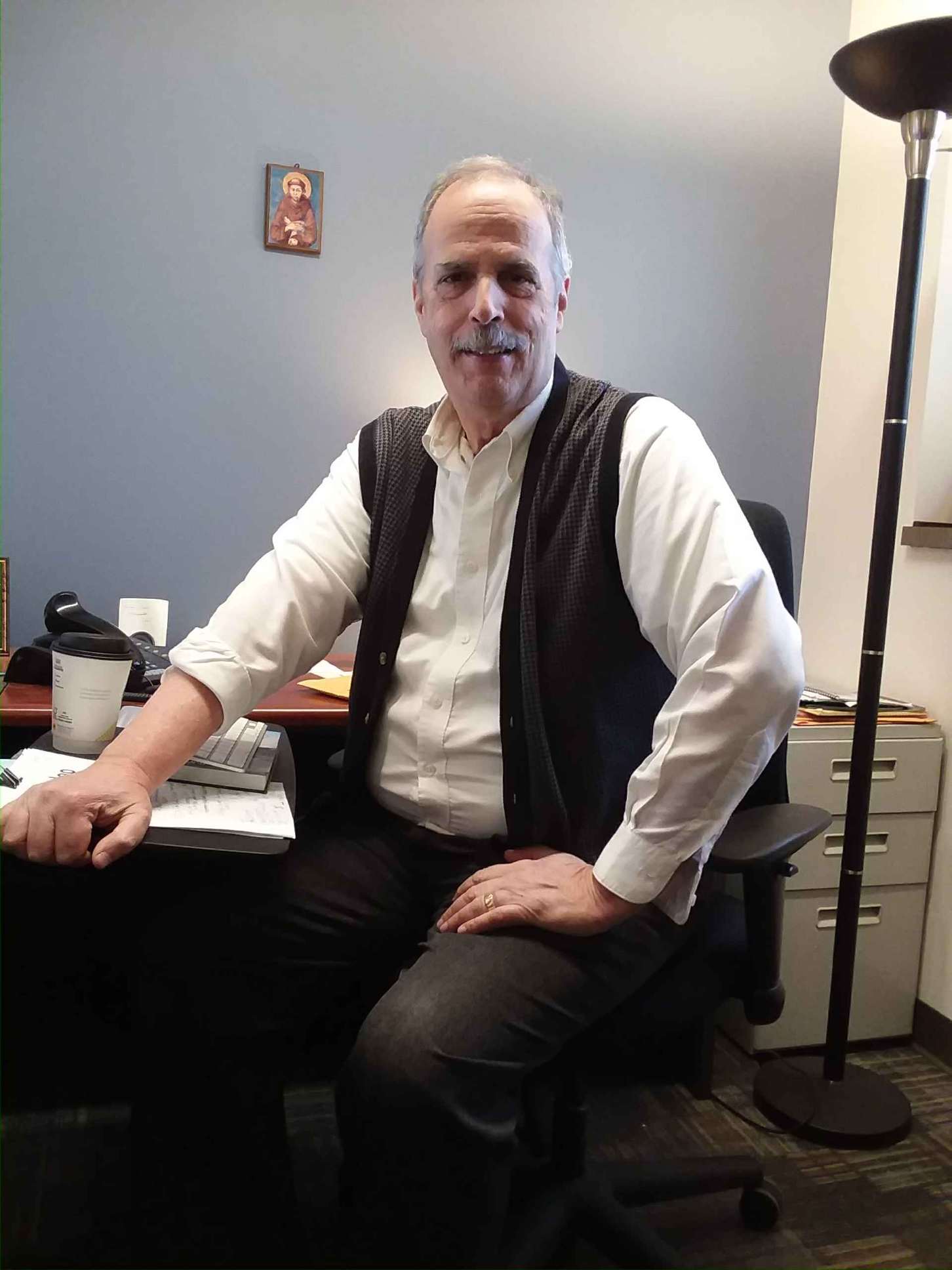 sEven after 20 years of working the same job, the public relations manager in the Marketing and Communications Department said the variety of the job is what keeps him coming back.

Tom Sofio began working at Franciscan University in the fall of 1998, moving from Spokane, WA, so he would be closer to his wife’s family in Massachusetts. Having graduated with a degree in communication arts with a focus on television, Sofio wanted to land a job in the media.

“The job was a perfect fit,” said Sofio. “I wanted to do something mission-related. I could never do marketing or PR for a tobacco company.”

Sofio has worked in the Catholic media since graduating from college. He began working at a Catholic radio station right out of college and then worked on a KON Jesuit radio station as a volunteer. He worked TV and Radio in Spokane and later as a PR agent at a local hospital.

Sofio said he found all of those skills needed for the job he now holds at the university.

“This job had a little bit of everything. … It put all my skills to work,” said Sofio. “I think that’s why I stayed here 20 years because I love the variety of this job.”

Much of Sofio’s job varies in context. Some of his jobs include writing press releases, working with free lance writers, editing stories, being assistant editor for the “Franciscan Magazine” and working on promotional videos, such as the one recently finished for the Bosco conference for the conference office and a promotional video for the Priestly Discernment Program.

“I get to play in all this different media,” said Sofio, “and I am humbly grateful that they actually pay me to do what many people would say would be a hobby, like an artist.”

“I get to paint in television, in audio, in TV news and media,” said Sofio. “The variety is just amazing.”

Though he has a chance to dabble in different media, the main part of Sofio’s job is in public relations, which includes helping reporters on stories about the university and being the contact for any outside media.

But again, this job comes with its variety of tasks.

Sofio said his favorite aspect is the fact he can go from writing a copy on the Polish pilgrimage the Rev. Sean Sheridan will lead, then go speak to a reporter from the National Catholic Register to help him line up an interview with a faculty member, then turn around and write a press release on something the university is unveiling, then again turn around and help a videographer figure out how to wrap up a video promoting the summer conferences. All this within an hour.

As public relations manager, Sofio gets a chance to help choose what aspect of Franciscan should be shared with the world.

“In here, we have such a great story to tell,” said Sofio. “We have students who go on mission trips. … We have faculty who write and articulate on some of the most pressing issues of our time, and it’s really a privilege to coordinate an interview and allow them to have a larger audience than their classroom.”

Sofio said when students are going on mission trips, he’ll link up with a diocesan newspaper in the city where they’re going, and when reporters from the National Catholic Register call, it’s his job to find a faculty member.

“Chances are if you’re listening to EWTN or any Catholic radio, and you hear someone from Franciscan,” said Sofio, “I set that interview up a day or two before.”

Sofio said only half of the audience reading “Franciscan Magazine” is actual alumni. The rest are donors, Steubenville conference attendees and those who are attracted to the unique Catholic identity of the university. This is why the department takes great care in choosing stories that will be relevant to them.

“We pick stories that we think help tell a wider picture that shines a Catholic lens on society,” said Sofio. “In a way, it’s really very freeing, that we have this opportunity to tell all these other stories about current events in the news.”

“Our alumni are everywhere,” said Sofio. “They are working in dioceses, in parishes, in society, and they’re making a difference in the culture, and we can find them … and include them in our stories. It’s just what the university is about.”

Another task of the department is to put out roughly 125 news releases throughout the year, promoting local events, concerts and the goings on around campus. These stories are pitched to reporters to help raise awareness of the mission of Franciscan.

“People find a story more believable than an ad,” said Sofio, speaking on the importance of reaching out in means other than banner ads and similar means.

“(If) you read a story that includes our moral theology professor Dr. Kevin Miller or Dr. Ann Hendershott as a Catholic sociologist within a contemporary story on an issue of the day and you like his or her comments, it forms a favorable impression of the university they work for or reinforces people who know Franciscan,” said Sofio.

“Getting our faculty and friars and staff into news stories is more believable to readers and viewers than paid commercials,” said Sofio.

A more recent example of this is Vice President Mike Hernon having Jim Caviezel speak on campus, which brought a lot of publicity to the university.

Sofio notes that he could not have done everything he accomplished without the Marketing and Communications team. Made up of 15 staff members, “It is a team that is multi-talented in many types of media.”

The team splits the work by having three or four to help write stories, three people to do videos, and five or six help with social media, while Sofio mainly works on media arrangements.

Sofio also noted how much he enjoys seeing students who worked for Marketing and Communication department go out and find jobs in the same field after college.

“It’s gratifying to see the many student writers who work in our department go on to launch successful careers in the media,” said Sofio.

“The Marketing and Communications team as a whole plays a role in telling the story,” said Sofio. “I’m just one part of that story.”

Sofio said the reason he enjoys working for Franciscan University is because “the Catholic connection to academics and student life are so clear and alive here: faith and reason are allies, not enemies at Franciscan.”