The faces behind legacy-leaving craftsmen’s hands 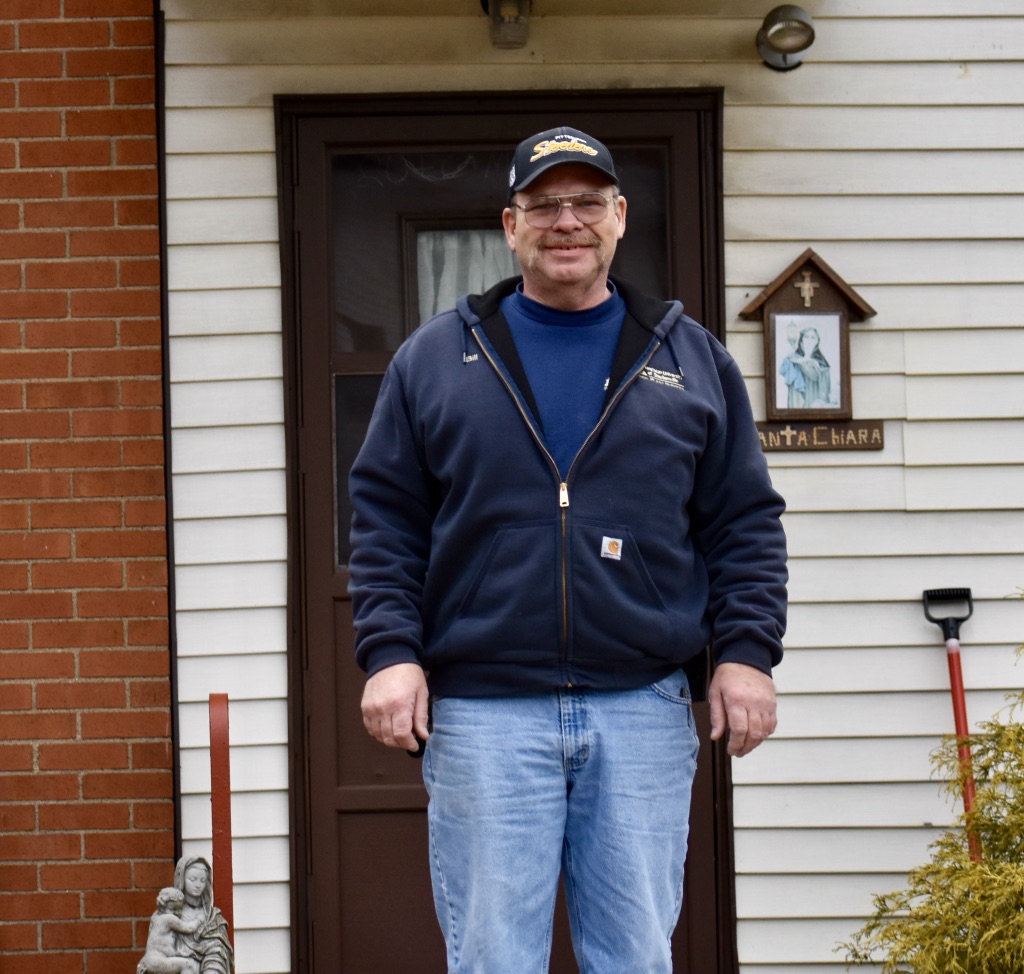 Turning empty spaces into something beautiful is what skilled craftsmen Wally Sadowski and Bill Thompson do with excellence at Franciscan University. Sadowski and Thompson work for Physical Plant Services as carpenters and do everything from ceilings, carpets to furniture. You name it, they’ve built it.

The very first thing Sakowski built was the stand for the piece “Head of Christ” on the ground floor in the J.C. Williams Center, when he started working at Franciscan back in 2004. He started with a rough-cut piece of lumber that someone had donated to the university, which he took only two days to turn into the finished product.

Regarding his favorite part about working at Franciscan, Sadowski said, “Taking care of the students.” With no children of his own, he explained that he finds joy in knowing that he has done something to fulfill a need and bless those around him, especially the students.

Wally explained how when he was given the task of creating the shroud of Mary at the Portiuncula, he and his fellow workers had to find and add the perfect rock to anchor her in. At the completion of the project, Sadowski refused to disclose his secret on just how he got her secured in the rock. “She’s in there good, and she’s not coming out,” was all he would say. He also built the beautiful wood arches around her, helping to “make her pop.” The arches are made up of small segmented wooden pieces all put together from scratch in just a couple of days.

Physical Plant carpenters do the complete design and planning of the work to meet the customer’s specific needs, such as cabinet work designed and built for the Alumni Center, said Sadowski. They also do dormitory, office and apartment furniture repair as needed and at times have to build furniture to meet special needs.

“We find a need and fulfill it,” said Thompson, who started working at the university in 2011 and has done everything from cabinets to carpet, installation and tile. “Everything’s a challenge because we’re always doing different things, but that’s what I love about the job. It’s not the same old thing every time,” he said.

Thompson did the cabinet work at the Contact Center in the Alumni Center and the remodeling of the new home for the TOR sisters in Assisi Heights. “That was a fun project, and it turned out nicely,” said Thompson.

Sister Mary Catherine, TOR agreed, saying that she was “very happy” with the work both Thompson and Sadowski did to make their new home in Assisi Heights a beautiful place to live.

She also shared how much she admired their ability to be “very creative” in changing the Height over from the Friary to suit the sister’s needs. For example, in one of the rooms, Thompson built a shelf made entirely out of smooth plywood that he painted, which makes the crucifix freestanding on the shelf appear to be suspended.

Both Sadowski and Thompson shared that neither of them are given any instructions other than “here’s what we need,” and they find a way to make it happen. They shared that they are able to overcome all objectives with the guidance of their manager, Chuck White, who lets them work at their own pace and personal speed.

White, the maintenance manager for Physical Plant, has been working at the university for 16 years and has Franciscan in his blood. White’s grandfather built the Portiuncula Chapel back in 1960. White said that his favorite part about working at Franciscan is the opportunity to work with so many amazing people like Sadowski and Thompson. “There is nothing these guys can’t do,” said White.

Without carpenters like Sadowski and Thompson, the landscape and overall experience of Franciscan would be incomplete. These amazing men have their fingerprints quite literally all around campus. Not one building hasn’t been touched by these humble and skilled craftsmen.

“You excel in things you like to do, so discover what you like to do and you will excel,” said Sadowski as a word of advice from someone who has found the best way to serve others with his work.

2018-01-29
Previous Post: University professor takes on role of Chesterton
Next Post: Signage project seeks to replace and add many signs around campus