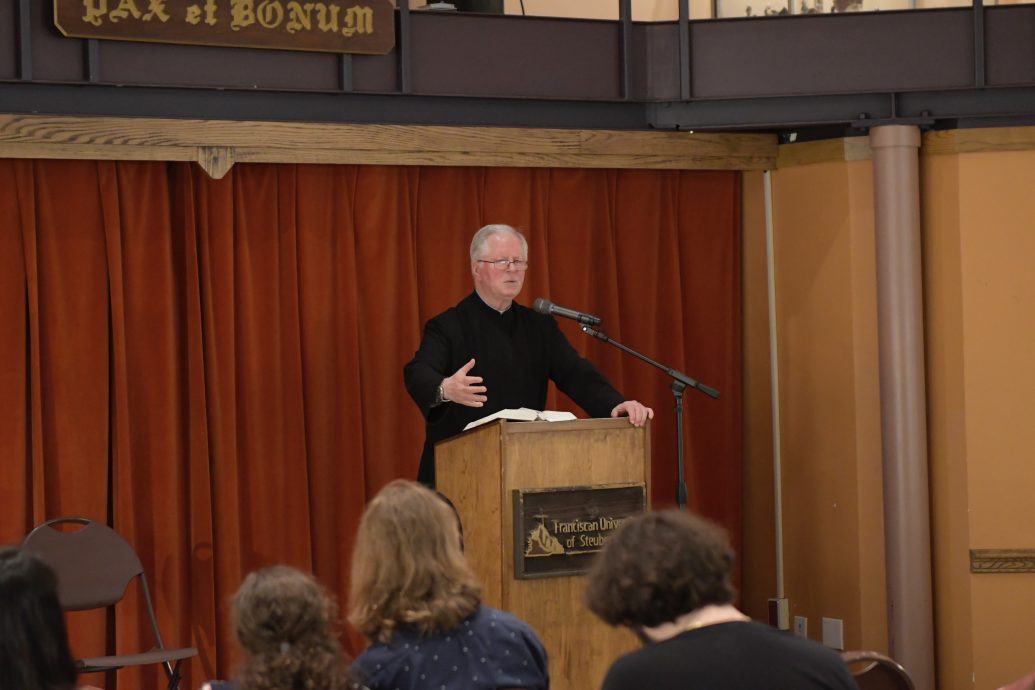 On Monday, April 8, at 7 p.m., students came to hear a unique talk in the Gentile Gallery called “The Role of Angels in the Plan of Salvation.”

Scott Hahn introduced the main speaker, the Rev. William Wagner. Known for his expertise in angelology, Wagner opened the evening in prayer using Psalm 34: “The angel of the Lord encamps around those who fear him, and he saves them.”

“The angel is not on your left or your right; he is all around you, he is there,” said Wagner.

The one disadvantage, said Wagner, of the lack of knowledge of angels is that they are often “out of sight and out of mind” and that they are “tertiary figures in Scripture.” He opened Scripture and engaged his student listeners by systematically combing through the Old and New Testaments, painting a descriptive timeline of the presence of the angels in Scripture and their role in the story of salvation.

Speaking of St. Thomas Aquinas’ commentary on the Gospel of John, Wagner explained that the suffering of Jesus Christ is enough to redeem the whole world, but the Father from all eternity desired that his mystical body, which includes all angelic beings in the heavens, contribute to the glory of God and salvation of mankind as an offering to its head, Jesus Christ, so that there could be perfect harmony between Christ the head and his body the Church.

Participants were appreciative of the intellectual dive into Scripture through a theological lens, because it allowed them to understand the importance of the angels in their life. Christopher Centrella, a freshman studying computer science, said, “It was absolutely awesome being able to comprehend a topic about faith like that of our relationship with the angels.”

Sophomore Krisztina Zalasdy, who is studying biology, added, “It was interesting. I was glad to have learned more about the angels and how we are supposed to cooperate with them.”

The evening ended with a Q&A which allowed for further discussion on the beautiful complexity of the angels which are, according to Wagner, “godly beings which are a mirror to the glory of God.”