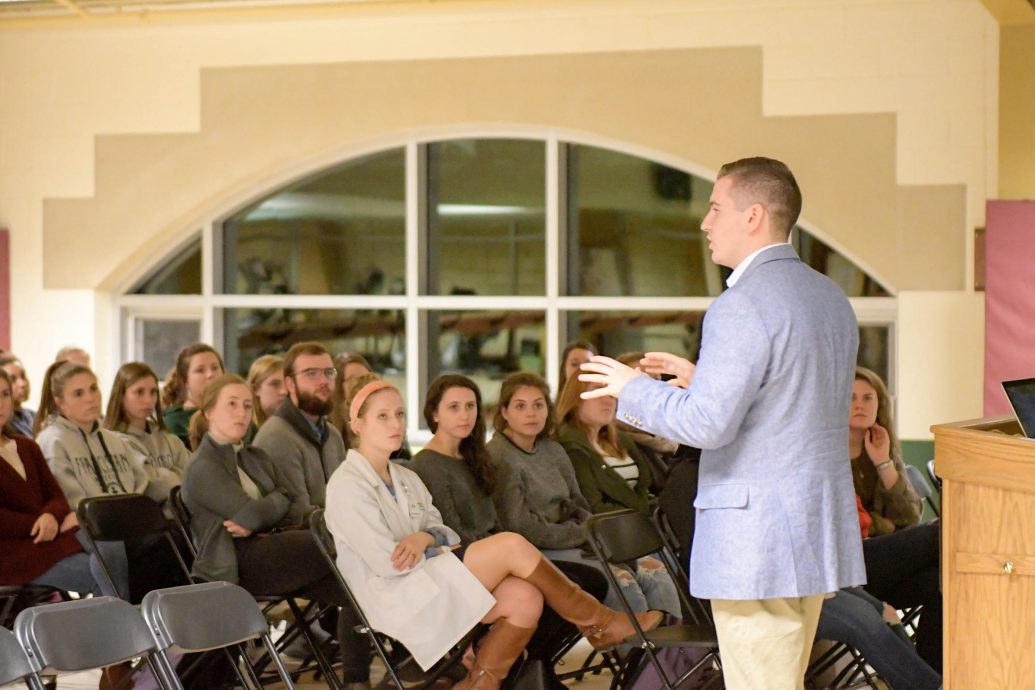 Students from Franciscan University of Steubenville were challenged to live with integrity at a presentation given Thursday, Nov. 8, in the Finnegan Fieldhouse aerobics room at 7 p.m.

Guest speaker Alex Demczak, a University of Missouri alumnus who was a quarterback for the university’s football team, spoke to those gathered about his own struggles as a student athlete and the four laws of integrity that he discovered through them.

After being dismissed from the team his junior year of college, Demczak was forced to take a step down and be a flag-thrower on the sidelines.

“Football was my identity,” said Demczak. “(But) there will be times when God will call you to be a flag-thrower … God will use you in that time.”

From his personal struggle of identity, Demczak discovered what he calls “the number-one career strategy no one is talking about: integrity.”

He proceeded to name the four laws of integrity that make great leaders.

The first law is that “integrity yields congruency, which builds trust,” said Demczak. He reminded his audience that it takes years to build up a relationship of trust, but one action can bring a relationship crashing down.

Secondly, Demczak said “integrity lays the groundwork for long-term success.” He said as students focus on their long-term career goals, they can become people of character by raising standards for themselves.

“Instead of focusing of what we are going to do, what if we focused on this: who am I becoming?” said Demczak.

Demczak’s third law of integrity states that “integrity allows you to be at your best, which allows you to help others be at their best.” He said that by dealing with one’s own past and moral “blind spots,” one can lead others to integrity as well.

The fourth law of integrity states “integrity frees you to live,” said Demczak.

Liam Galligan, a sophomore business management major, said that he thinks Alex’s message has been reflected in this year’s men and women’s cross-country season.

“What he’s talking about we can really put into action (and) we already have, which is exciting because we want to build our program here,” said Galligan, a member of the men’s cross-country team.

Alicia Winters, a freshman communications major, swimmer and diver, said the message taught her “how to examine (her) life in every aspect and how to get closer to Christ.”

The event was organized by Carly McDonald, a senior Center for Leadership student.