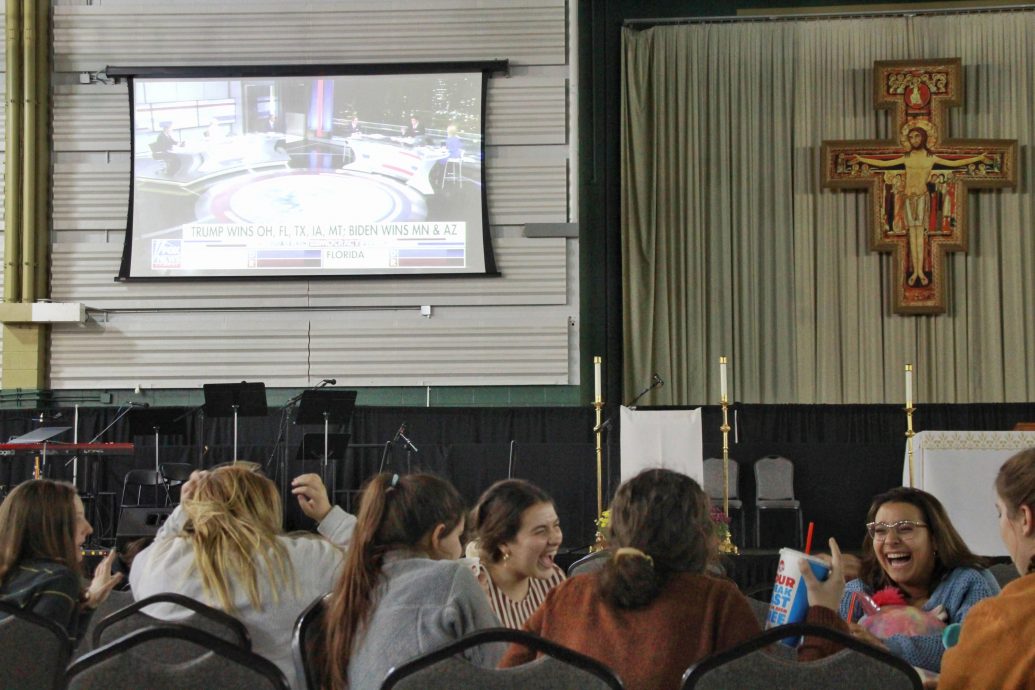 Students watched the election footage live Tuesday in Finnegan Fieldhouse, and continued to talk about it Wednesday morning even though no official results from the election are expected to come out until later this week.

The watch party, organized by Student Government, began at 9 p.m. and lasted until 1 a.m. Students filtered in and out of the fieldhouse while the screens streamed live election coverage from Fox News.

The fieldhouse remained around half full through most of the night with well over 100 students at any given moment. Some students were blasting music while others crowded in groups around phones and laptops that showed updates on the electoral college map.

Sophomore Camille Radakichenane said that the fieldhouse was very energetic.

“People were hyped up, and it seemed like people were mostly positive,” Radakichenane said.

Senior Grace Rybak said, “I think the camaraderie with other people … made (election night) less stressful.” Rybak also said she liked being surrounded by like-minded people.

“It’s great whenever the red states are called, everybody gets all excited,” Rybak said.

There were no results Tuesday night or Wednesday morning as to who would win the election. Students continued to talk about the election and their projections for the states that had not yet been called Republican or Democrat.

Sophomore Jack Thornton said he was not optimistic that the election will be decided soon.

“I think that if Trump never wins, we won’t find out for absolutely sure until after lawsuits,” Thornton said.

Junior Elizabeth Williams said that trust in God is the most important thing at this point in the election process.

“I think watching the election and being there is a good reason to practice our motto for the semester, ‘For we walk by faith and not by sight,’” Williams said. “Even though this whole process is very confusing, and there’s a lot of anxiety, and we don’t know what lies ahead, we can be confident that the Lord is walking with us.”