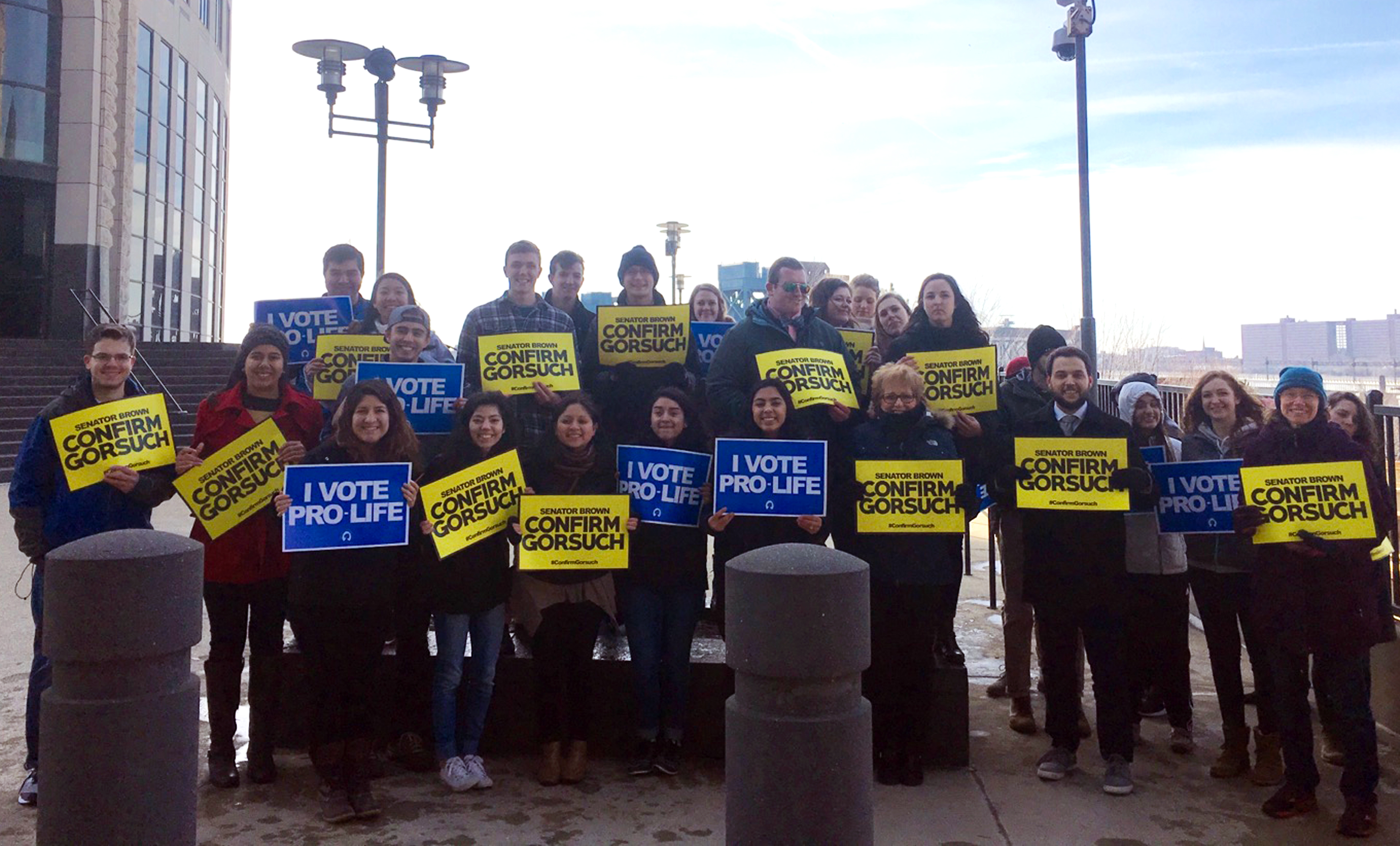 Franciscan University students traveled to the offices of U.S. Senator Sherrod Brown (D, OH) on Feb. 17, urging him to support President Donald Trump’s nominee for the Supreme Court, after he voted against it.

They began the day traveling to Cleveland, where they stood outside the Carl B. Stokes Courthouse and waved signs that said “I vote Pro-Life” and “Senator Brown: Confirm Judge Gorsuch,” as a press conference was held by executives from the Citizens for Community Values (CCV) organization and the Northeast Ohio chapter of Right to Life. During the press conference, Aaron Baer, president of CCV, declared that conservatives are tired of the political games played by senators like Brown and demanded that he votes to confirm Gorsuch for the Supreme Court.

“We want Sherrod Brown to give Judge Gorsuch a fair hearing so that he can see that (Gorsuch) is overwhelmingly qualified for the Supreme Court,” said Baer.

The group then traveled to Columbus, where another press conference was held, this time outside of the senators’ offices. Here, Baer spoke again as well as executives from Ohio Right to Life. Jessica Koehler, director of legislative affairs for Ohio Right to Life, said, “Judge Gorsuch is the perfect nominee to carry on the legacy of the great Antonin Scalia.”

Franciscan University student Ethan Jock also spoke at the press conference and talked about being part of this new generation of life. Jock said, “We are strong, proud and passionate about fighting the systematic genocide of thousands of lives in the womb.”

The trip was a joint effort coordinated by a couple of university students and the Susan B. Anthony List (SBA). The two organizations have worked together in the past, doing several canvassing trips around Ohio leading up to last year’s presidential election. SBA organizers of the event said that they were happy to have Franciscan students return because they are “hard workers and are the epitome of youth in the pro-life movement.”

Several of the other speakers also remarked on what it meant to have Franciscan University students at the rally.

“It’s a new wave of excitement to see this new generation of pro-lifers go out and get involved,” said Katherine Franklin of Ohio Right to Life. “To see students take time out of their school day, their leisure time, just speaks volumes to everyone else.”

Many of the students that went on the trip had also gone on the previous trips last fall, and said that the experience canvassing really motivated them to return and get involved in other ways. Senior Jackie Sinchi said, “It helped me realize that we can actually make a difference with what we do. People will actually listen to us because we’re so young.”

The confirmation process for Judge Gorsuch, whose nomination was announced in January, will begin March 20.

2017-03-05
Previous Post: New club combines running with prayer in support of life
Next Post: Speaker reflects on the importance of building a culture of love