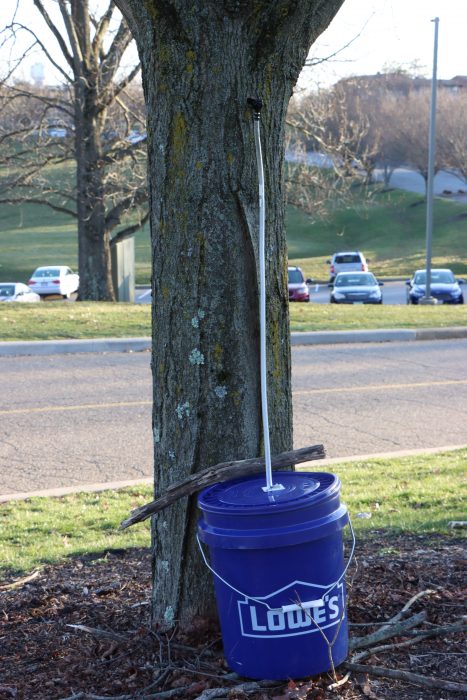 Tapping maple trees for syrup usually brings to mind the snowy woods of Vermont, where most of America’s maple syrup is harvested. But maple syrup can also be found right here in Steubenville, Ohio, and there is a group of students at Franciscan University of Steubenville who are taking advantage of this resource.

Over the past months, students have been experimenting with maple tree tapping on the university campus and are planning to make their own syrup when enough sap has been collected.

Scattered throughout the wooded regions of the campus, there are dozens of maple trees, some near Holy Spirit Friary and many more up behind the old golf course.

Junior Alex McKenna initiated the project and has been coordinating the process over the past month and a half. There are about a dozen other students involved, who hope to form a club in the near future.

There are three kinds of trees being tapped on campus for sap: sugar, red and silver.

Sugar maples provide better sap for syrup, said junior Jonathan Meinholz, who is one of the students involved in the project.

“We looked into tapping mainly sugar maples because they have the best sap,” Meinholz said. “Their ratio is about 30 gallons of sap to one gallon of syrup, whereas silver maples and red maples will probably come out closer to 40 gallons.”

“The sugar maples are the ones that are producing most of our sap,” Meinholz said. “The red (and) silver maples are fairly dormant, it seems, and we’re not expecting to get a lot of sap out of those.”

Depending on the size of the tree, there are varying numbers of taps and 5-gallon buckets attached, Meinholz said. There are 22 taps total in about 13 trees.

“On some of the bigger trees we’ll have four buckets,” said Meinholz. “Most of the trees — all the sugar maples except for one — have one bucket (and) there’s one that has two buckets.”

The ideal conditions for maple sap to flow is on days that are in the mid-40 degrees followed by nights below freezing.

“Some days we’ve had no sap, other days we get a few gallons from each tree,” Meinholz said. “So it’s been hit or miss, that’s just how it goes.”

The project has been approved by the university and funded by Franciscan University Student Government, Meinholz said. FUSG has assisted in the purchase of the taps, the buckets and the large tote that stores the sap. It also helped to provide materials for the heating pan that will be used to boil the sap into syrup.

Physical Plant has also helped, lending storage space for the collected sap and the use of a Kubota vehicle to assist in the transportation of the sap buckets.

“We have all the infrastructure (and) materials now to keep this going for years to come,” Meinholz said.

Once it is time to boil down the sap, the group plans to use a tray built by McKenna.

“It will be in a large tray,” Meinholz explained. “As it boils, the more dense (liquid) will slide further down the tray, which will be the syrup. As the water boils off, the syrup will go to the bottom and then slide down the tray.”

The current goal is to produce two to three gallons of syrup altogether, Meinholz said.

Prior to being boiled, maple sap is mostly water.

“It’s mostly water, but if you get a fair enough portion of it you can definitely taste the sweetness to it,” Meinholz said. “It’s not a lot but that’s the reason you have to boil it down 30 or 40

(times) to one to isolate that sweetness.”

Meinholz frequently checks on the maple trees to make sure the taps are properly attached and to empty the buckets.

Tapping for syrup is something Meinholz has been wanting to do since he was a kid.

“Being from Wisconsin, we have lots of maple syrup industry,” Meinholz said. “I’ve always wanted to tap maple trees, it’s just a very large and demanding process, especially when you have so much … sap going down to so little syrup. But it’s really been awesome that Alex (McKenna) started this project. … It’s been a great opportunity to learn more and it’s something fun to do.”

Meinholz said they plan to keep tapping until early April, when they hope to host a pancake breakfast on campus to feature their syrup.

“At the pancake breakfast we’re planning on having some information available so that you can learn about the process,” Meinholz said.

The pancake breakfast is set for April 11 and more information is to follow. To learn more about the ongoing project, follow Franciscan Maple Syruping on Instagram @fusmaplesyruping.

2021-03-25
Previous Post: Joe Vernau: Playing basketball from freshman to senior
Next Post: Blessed are the pure of heart