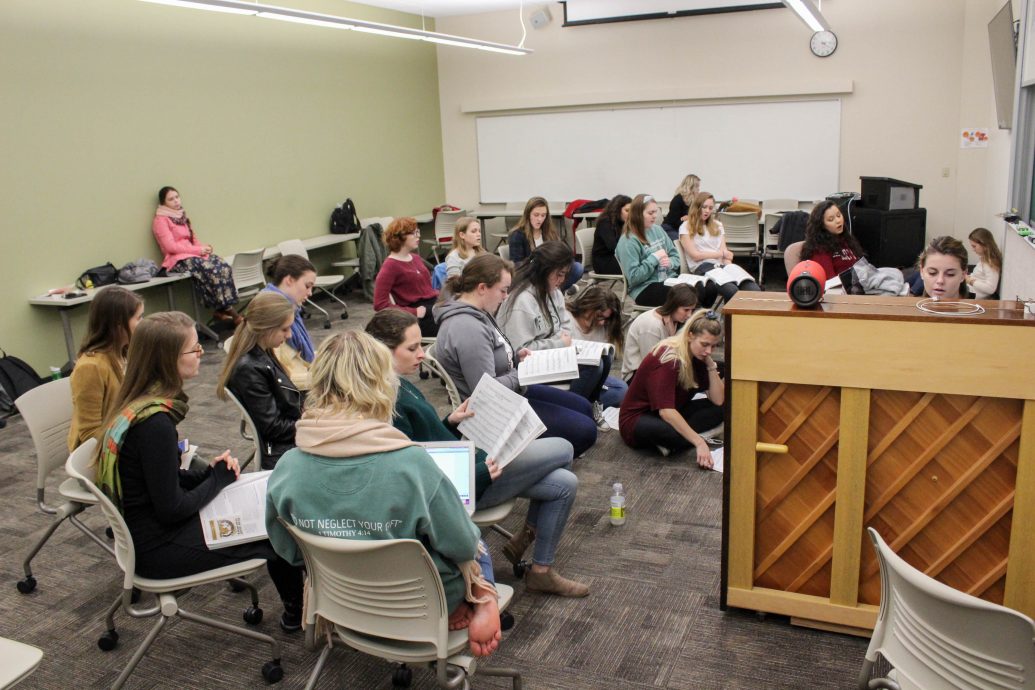 The musical “Seussical,” by Lynn Ahrens and Stephen Flaherty, is based on some of Dr. Seuss’ well-known works, including “The Cat in the Hat,” “Amazing Mayzie,” “Yertle the Turtle” and “Gertrude McFuzz.” It uses the characters from these iconic children’s books and combines them with the plot of “Horton Hears a Who” to form an enchanting tale. It is a return to childhood in an exciting and fantastic way.

Freshman Elizabeth Wagner, who plays the role of Jojo, said she has always wanted to be in a musical. “I love to sing and act, so getting to participate in FUMTT is a dream come true,” she said. She also said that the pressure of having a lead role and simultaneously being a freshman was intense but enjoyable.

The cast ranges from freshmen to seniors, all who have been touched by bringing together this story for an audience. From the lead actors to the soundboard operators, all have experienced personal growth from being stretched to learn their roles.

Molly McManus, a senior playing Mayzie, has found it challenging to develop a character who is so different from herself. “Mayzie is super outgoing and always wants the spotlight on her,” she said. “I tend to be much more relaxed and introverted so it’s been quite a stretch for me. Sometimes it’s hard to know how she would respond to something, or even to learn how to walk like her, but it’s been so fun to be able to use my creative side more than I have before in any other role.”

Junior sacred music major Cathleen Sanborn, who is playing Gertrude McFuzz, said the most enjoyable part of the experience has been the way her character has shaped her, and made her feel like “such a woman!”

Through her character’s interaction with Horton, Sanborn said Gertrude learns how to love past appearances. “Her character arc is such a raw depiction going from her best and worst self and back,” said Sanborn. “When she realizes that it actually doesn’t make a difference to Horton how she looks, we get to see the best of her as she comes full circle and makes whatever sacrifices necessary to help him.”

There is also a place for people who do not want to be in the spotlight. Freshman sound technician Emily Bowman said that her favorite part of the process was seeing what was happening without being the center of attention. This is a good option for people who want to be a part of a musical production but are not interested in acting. It gives them professional experience as well as the experience of making friends with the other members of the crew and the cast.

Senior Hannah Taraschke, the director, has been around since show one, in which she played Jack’s Mother in “Into the Woods,” the first FUMTT production. Taraschke has also been on the creative team for three semesters. She has since directed and choreographed “She Loves Me” and “Charlie Brown.”

Taraschke says that the FUMTT is “the joy of my life,” and she is very excited to be directing and choreographing “Seussical” this year.

“Seussical” will run on Friday, Nov. 16, at 7 p.m., Saturday, Nov. 17, at 2 p.m. and Sunday, Nov. 18, at 2 p.m. and 7 p.m. in the Gentile Gallery. Tickets can be bought online at www.ticketsource.us/whats-on/steubenville-oh/the-gentile-gallery-located-in-the-jc-williams-center/fumtt-seussical.