Students rally for life despite cancellation of the annual march 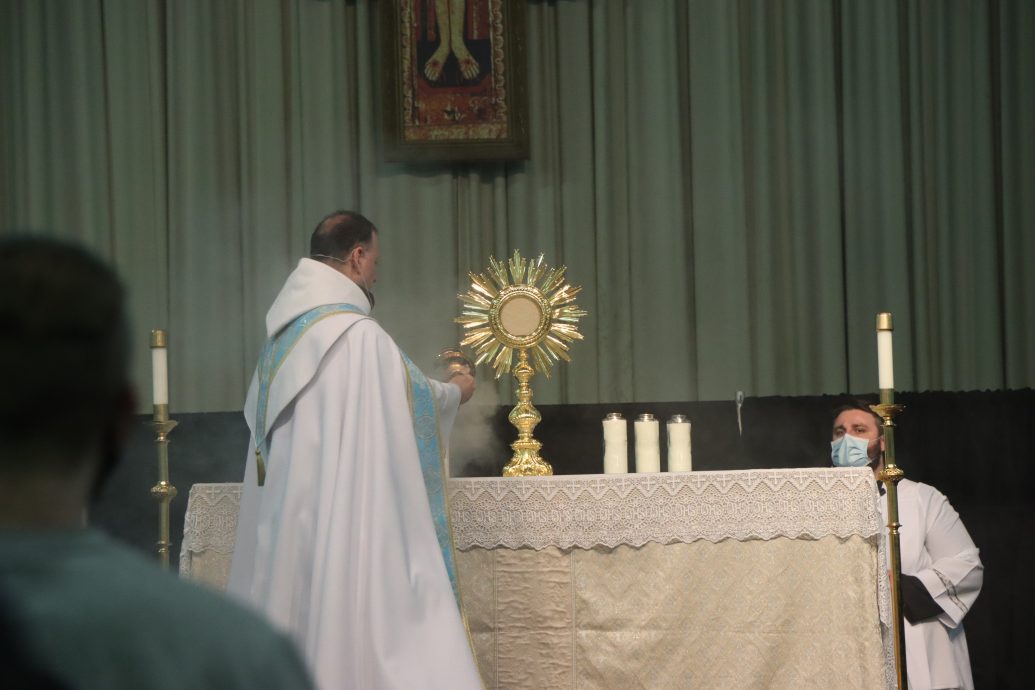 The cancellation of the annual March for Life in Washington, D.C. on Friday did not prevent students from demonstrating their commitment to the pro-life movement through various events held at and around Franciscan University of Steubenville.

The events kicked off with a 9 p.m. Mass on Thursday in Finnegan Fieldhouse, where students nearly pushed the fieldhouse to capacity.

During his homily, the Rev. Shawn Roberson, TOR, connected the metaphysics of St. Thomas Aquinas, the saint of the day, to the pro-life movement, arguing that abortion should be at the top of the Church’s list of issues to address.

“We live in a reality where one side of the fence now argues that … you can just take an eraser and erase this life, and it doesn’t matter,” Roberson said. “This is why the Church needs to take a profoundly deep stance on this one particular issue.”

After the Mass, all-night adoration began in the fieldhouse. Students were encouraged to come for an hour through the night to pray for the protection of the unborn.

Sophomore Sofi Mijares attended adoration from 10-11:30 p.m. and said that adoration is just as beautiful as marching physically in Washington D.C.

“You were not marching for other people to see you, but you were present right in front of the Lord,” Mijares said. “Your intentions are what really matter to the Lord.”

Adoration concluded Friday at 7:45 a.m., and the second pro-life mass followed at 8 a.m.

Students, faculty and staff also gathered on University Boulevard from 1-3 p.m. as part of a Life Chain event. Those in attendance held signs with pro-life slogans, showing their commitment to the pro-life movement.

The day concluded at 7 p.m. with a special rosary and candlelight procession for the unborn from Christ the King Chapel to the Tomb of the Unborn Child. The procession stretched from the tomb back to Christ the King.

The Rev. Dave Pivonka, TOR, presided over the rosary. Afterward, Pivonka gave a brief history of the tomb, which marks the place where seven abortion victims are buried. In 1992 it inspired the Rev. John O’Connor, then archbishop of New York, to call for more tombs to be built around the country in memory of all the unknown aborted children.

Pivonka urged students to continue to pray for the souls of the unborn.

“We will always remember them, and we will never stop praying for them,” Pivonka said.

Freshman Chiara Ricupero, despite being disappointed that she could not attend the March for Life with other Franciscan students for the first time, said that she enjoyed the events Franciscan offered.

“The Mass was beautiful,” Ricupero said. “I went [to adoration] at 2 a.m., so that was so peaceful, and it was nice seeing other people there.”

The March for Life, which has continued every year since 1974, was canceled due to COVID-19 and increasing political tension in Washington, D.C.