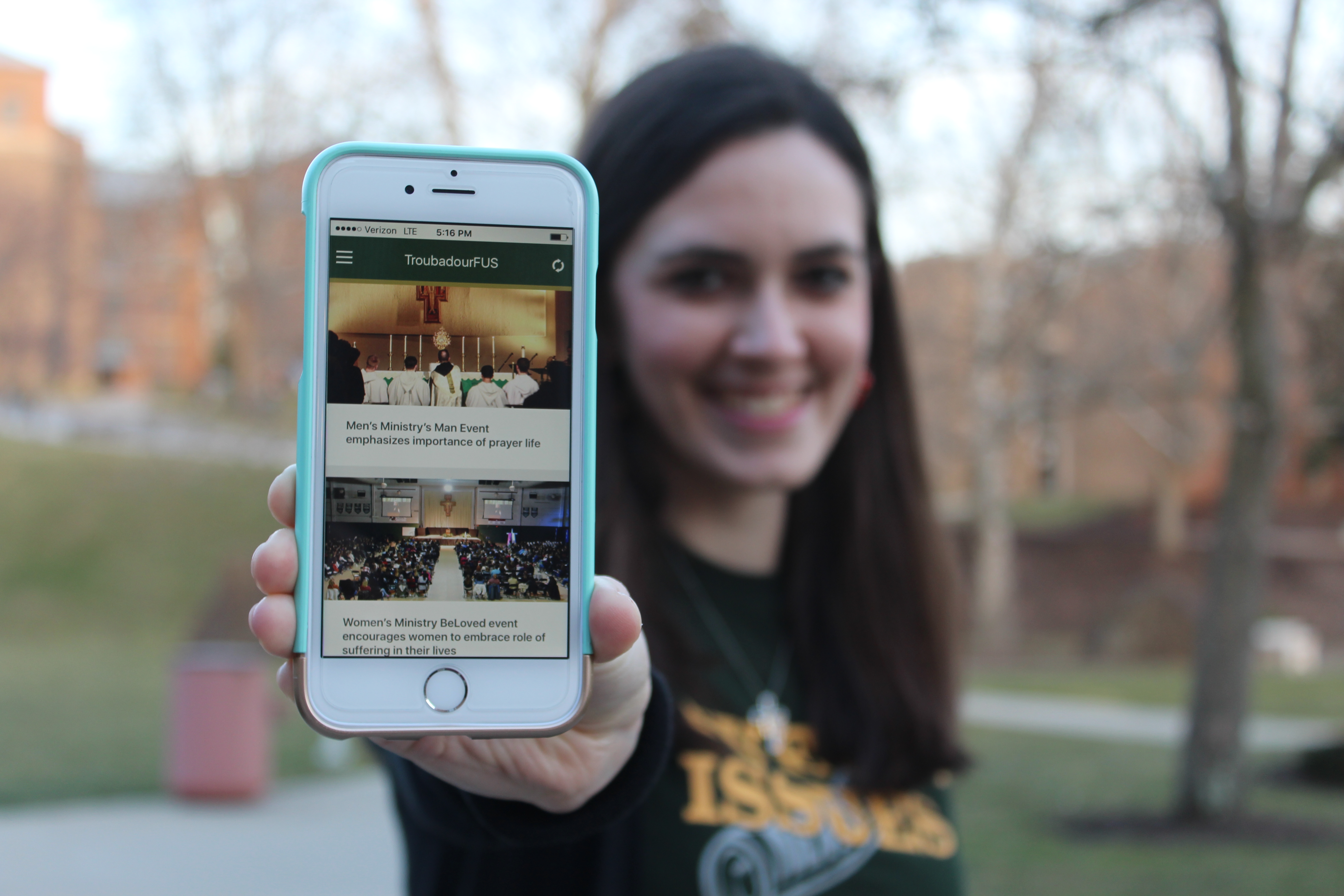 The Associated Press’ mobile application was not developed as a result of a class project. Neither was The New York Times’ app nor USA Today’s.

“Dr. Maloney asked us to basically plan a project or an app or something like that,” said Norton, the leader of the group. “One of the guys in our group, Blaise, loves The Troubadour. He reads it all the time so he asked if we could make an app for that. We all thought it was a good idea. It was simple enough that it would be not too hard to make, but it would be really fun and something that could actually be useful. It was Blaise’s idea, and we just kind of ran with it.”​

A year before the group project, senior journalism major and then assistant editor of The Troubadour Lauren Ramseyer had been toying around with the idea of making an app for The Troubadour.

“As I’ve progressed through different classes here, it’s come into my head as to why an app is becoming more and more of an important thing,” said Ramseyer, now editor-in-chief. “We talk about reaching your audience and reaching the people that you need to reach where they are.”​

Little did Ramseyer know that others shared her same idea of reaching readers where they are. When the newly appointed editor-in-chief was conducting staff interviews for the 2015-2016 school year, many applicants also mentioned wanting to create an app for The Troubadour.

“It grew from an idea in the back of your head, sitting in class going, ‘Oh we could do that, maybe’ to ‘Oh, other people want to do it, too, and there’s a way we could do it,’” said Ramseyer.

​The transition from idea to reality was a tough process, however. Both Ramseyer and web editor Melissa Solano lacked the coding knowledge necessary to build the app from scratch. More and more, it was looking like TroubadourFUS would never hit the Apple Store. At least, not for the time being.

Ramseyer had just about given up hope when she checked The Troubadour’s email one day.

​“Out of the blue, halfway through the semester, we got an email to our account from Paul and his group,” said Ramseyer. “I read that and, of course, I just started to laugh because we had been praying about this and, voilà, out of nowhere. That was definitely an answer to prayer.”

​With Ramseyer’s blessing, the group of four computer information science majors set off to create The Troubadour’s new app.

“Originally, we were going to do the whole thing ourselves, start to finish,” said Norton. “We’d program it and then somehow produce it and then give it to The Troubadour to put it on the app store and all that. That was going to be a ton of work.”

Looking for other options, Norton did his research and found that The Troubadour operates as a WordPress blog. He also found a service called Worona that converts WordPress blogs into apps rather easily, so Norton approached his group with the idea of using the outside service.

“We all agreed that was the best place to start,” said Norton. “From there, Blaise really helped out with the user interface and what he wanted it to look like. Connor helped out a lot with the coding. I did some of the bug-fixing. Henry had a lot of the ideas and helped out with the big picture stuff. We really just worked from there.”

​Norton and Ramseyer remained in contact for the entire creation process to ensure that The Troubadour was getting what it wanted in terms of look and functionality but the group essentially had free reign. After all, TroubadourFUS was their project, too.

“Really, his group, the four of them, did it from start to finish,” said Ramseyer. “They wrote up the whole programming list of what it would do, how it would work, different contacts and different add-ons. They were in contact with Worona the whole time and they just handed over the keys to me. Paul contacted me off and on, but he really took our guidelines of what we wanted and put the artistic touches on it and just went with it.”

The final product hit the Apple and Android stores in mid-December while the newspaper officially launched the app in late January at the start of the spring semester.

​Prior to the official launch, TroubadourFUS had approximately 30 downloads across the two stores. These were mostly from Norton, his group, The Troubadour’s staff, family and friends. Total downloads now stand at 50 users as of Feb. 2.

Initial reviews have been mostly positive with a few five-star ratings on the different app stores. All involved in the project are pleased with how the app turned out.

“I love using it,” said Norton. “There’s a couple things that I would possibly change about it, but that’s really problems with the service that we used. I think it works really well for version one of the app.”

Ramseyer agreed, saying, “I love where it is right now and I love the fact that we’ll have opportunities to make it better as technology changes, people’s interests change, people’s needs change, Franciscan changes. It will be nice to know that we at least put in the groundwork for another stepping stone that will be able to help The Troubadour keep up with what’s occurring on campus.”

No plans are in the works for a version two of the app yet.

“This semester, there is probably not going to be any huge changes to it,” said Ramseyer. “It’s just going to be some troubleshooting this semester as well as writing out different packages and word documents of how to use it.”​

Keeping her audience in mind, Ramseyer encouraged the campus community to get involved and see what people think about the app.

“Contact us with any suggestions or opinions,” said Ramseyer. “Go ahead and rate us on the app store. Give us your feedback. Let us know if there’s any other easier ways for us to serve you and for you to get the information you need.”

2016-02-11
Previous Post: Thesis advice from a senior who’s been there
Next Post: ‘Judy from Late Night’: a staple of the Franciscan community