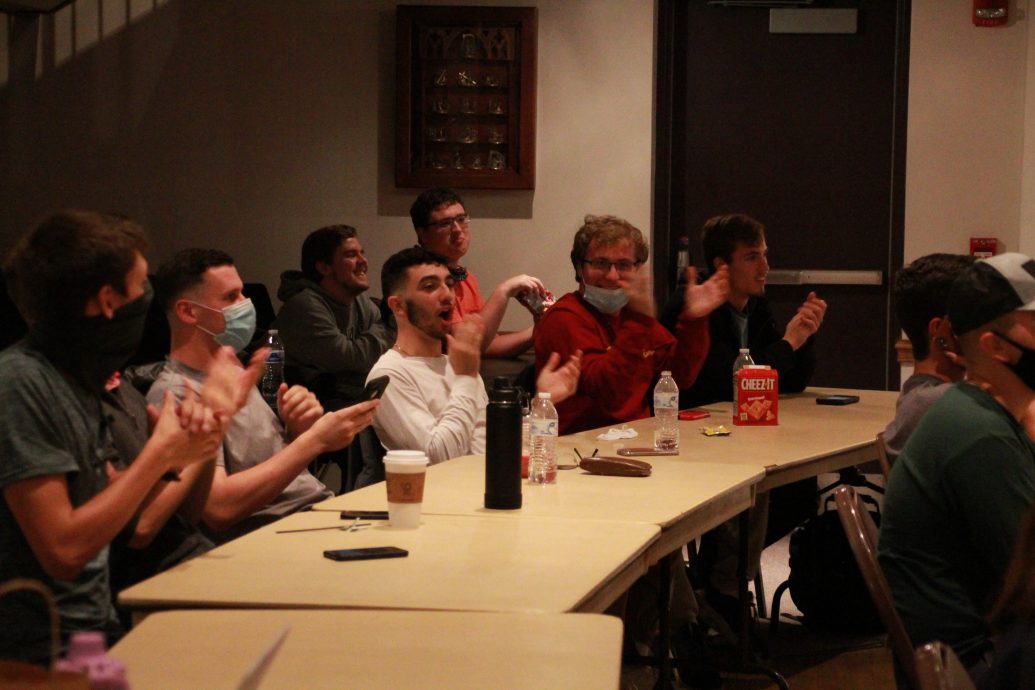 On Tuesday night, the Gentile Gallery was filled to capacity with students watching the first presidential debate of 2020.

Matt Murphy, president of Students for Life, explained the idea behind the debate watch party.

“Our mission statement is to be involved in the political sphere and to make people aware of how … the political scene affects the pro-life movement,” said Murphy. “We have two candidates with very different views on abortion and it’s important for our members and everybody else to understand where they fall on that issue before they go out and vote.”

“We have two compelling candidates and it should be a fun time,” said Murphy before the debate began.

The atmosphere of the gallery was inundated with the buzz of speculations and predictions for the debate before it started at 9 p.m.

Some thought that presidential candidate Joe Biden would add another blunder to his list of public fumbles. Others were betting that president Donald Trump would dominate the debate with an imposing personality. All, however, were eagerly anticipating what would soon prove to be, as Murphy predicted, a fun time.

During the debate, students cheered and applauded whenever Trump stood fast on important yet controversial issues. Everyone laughed whenever Biden or Trump made a seemingly witty comeback on the other’s attempt to dominate their speaking time.

There was certainly some tension when both were speaking over the other and nothing intelligible could be made out of the resulting clamor.

As everyone exited the gallery after the debate, the air was once again filled with the buzz of conversation. This time, everyone had a solid opinion of the proceedings.

“I think Biden did surprisingly well … (given) his track record,” said sophomore Peter O’Keefe. “But he didn’t really seem to care very much about answering exact questions.”

“President Trump, while very abrasive and kept interrupting … was very clear (about) what he did for the country and very clear about what’s going on and what he plans to do to help with all the situations,” O’Keefe said.

“I thought that it was pretty wild, sometimes incoherent,” said senior Catherine Bracy. “I thought that Trump did a little better job answering the direct questions … I think he has more of a plan for this country. He did bring up more numbers and facts, which may not qualify it on their own, but I found him to be much more convincing.”

The event was sponsored by Students for Life.