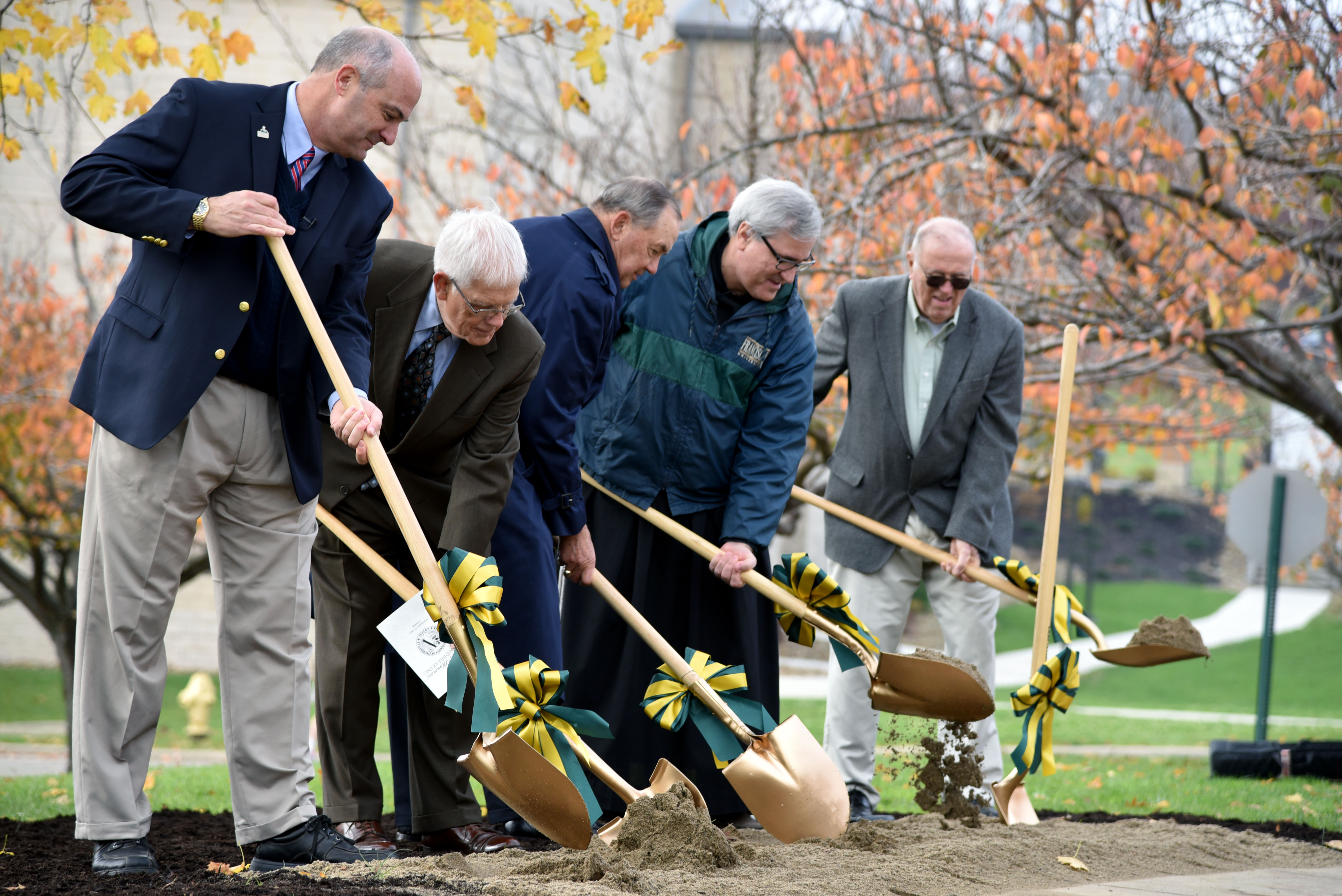 Veterans and alumni as well as students, faculty and staff of Franciscan University of Steubenville gathered Nov. 11 for a groundbreaking ceremony for Franciscan’s new Veterans Memorial.

Veterans were present from several past conflicts, including the Gulf War, Iraq, Afghanistan, Pakistan, Vietnam and Korea.

“We’re here today to honor the heroes. … To honor their … courage. … And to say thank you for their sacrifice,” said Chris Ice, director of Major Gifts.

Veterans Day was established at the end of World War I on the 11th hour of the 11th day of the 11th month of the year to remember the fallen of the war, but it has since been used to honor all those who have fallen in every war, said Ice.

“Our gathering (today) is just one small spark in the flame of pride that burns across the nation today and every day,” said Ice. “It’s not a lot, but it’s one small way we can honor those who made the ultimate sacrifice.”

Ice’s speech was followed by a 21-gun salute as well as the singing of the national anthem, performed by senior voice major Amanda Rodriguez, and a prayer said by the Rev. Dan Pattee, TOR, alumni chaplain.

Ice then introduced Dan Schmidt, an alumnus from the university’s class of 1967 and a U.S. Army veteran. Schmidt was a member of the Tau Kappa Epsilon Fraternity, which sponsored this memorial.

“We recognize that it’s a long standing tradition of military service here on this campus. … The founding members of this school were military veterans who had come back from World War II,” said Schmidt.

Schmidt said that the idea of this memorial came about at one of the fraternity reunions, when they wanted to recognize their fraternity brother, Richard Leo “Whitey” Schoff, who died in Vietnam as a U.S. Marine.

“(During a reunion) we considered how we could permanently recognize service on the campus and the idea was that we would have a flag pole erected,” said Schmidt.

The fraternity was shown the site on which its memorial was to be built, but Schmidt said the members decided they could do something more than just erect a flag pole. Instead they decided to build a destination for reflection and prayer for those who serve to protect the United States, he said.

“In the Franciscan tradition,” said Schmidt, “we hope that all of us will reflect on the fact that service is a lifelong opportunity, a lifelong action, and that when we’re presented with the opportunity … to a cause greater than ourselves. … We’ll respond with our time, talent, and treasure in the spirit of generosity.”

Allen Abel, a veteran and alumnus of the university, echoed Schmidt’s sentiments.

“We all just decided (we wanted) something that would be a place for students to kind of just remember … anybody who has given their life for our country,” he said.

The ceremony concluded with the roll call of Franciscan students and alumni killed in action, the playing of taps, the actual groundbreaking by the veterans present and a closing prayer from Pattee.

Rodriguez said, “I was so thankful (to be) able to sing our national anthem in honor of veterans.”

The memorial will be completed by spring 2016.

2015-11-16
Previous Post: Catholic speaker discusses male, female genius, complementarity of the sexes
Next Post: Guardians of the Divine Will Dance