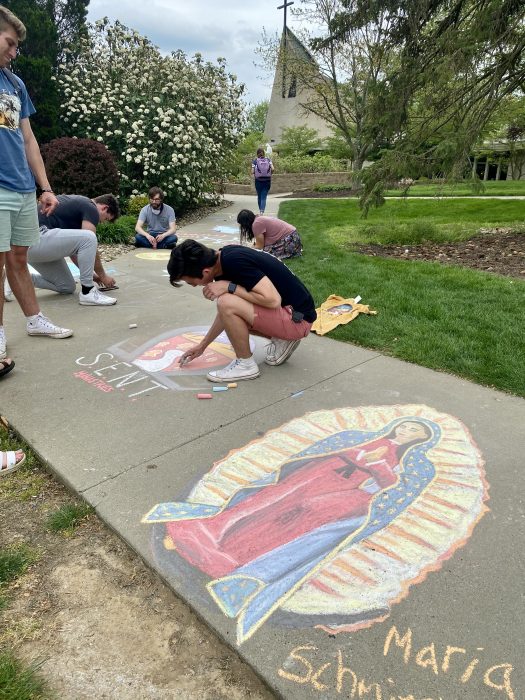 Student-created chalk art lined the sidewalks outside the J.C. April 28 as music filled the air for Exc!te’s chalk festival.

The event, hosted from noon to 4 p.m., treated people to food and drinks, free of charge. Walking tacos were provided by Kat’s Kitchen Table and drinks by Exc!te. Music, consisting of early 2000’s songs, was played over speakers set around the Finnegan Fieldhouse courtyard.

The main draw of the afternoon was the chalk art competition — a chance to win a $100 Amazon gift card. Second place received a $50 gift card and third place $25.

Those who wished to compete were directed to sign up and select a square of the sidewalk between the J.C. and the Student Life porch. The only rules of the competition were to keep the artwork to one square, finish by 4 p.m. and sign the finished product.

Passers-by who did not wish to compete were invited to create chalk art of their own, but were asked to keep it separate from the official competition. Many students and children decorated the sidewalk with colorful chalk drawings.

“It was incredible to see so many people displaying the gifts God gave them,” said Sofia Montes.

“Every work was so interesting,” agreed Ava Montes. “I loved seeing creativity on campus.”

At 4 p.m. the Exc!te officers gathered and began to look over the chalk art. They viewed each piece entered in the competition. After some time, the winners were announced.

The winner of the competition was senior Jennifer Schendel, whose artwork was an image of Madonna of the Streets.

The runner-up was freshman Grace McCormick, who drew a colorful image of the San Damiano Cross.

Junior Isaac Iniguez, Exc!te’s vice president of marketing and media, said that it was a tough decision to make.

“I was stunned by the incredible artistic talent that many students have here,” Iniguez said.

Exc!te meets every Wednesday at 11 a.m. in the St. Margaret room of the J.C. Williams Center.