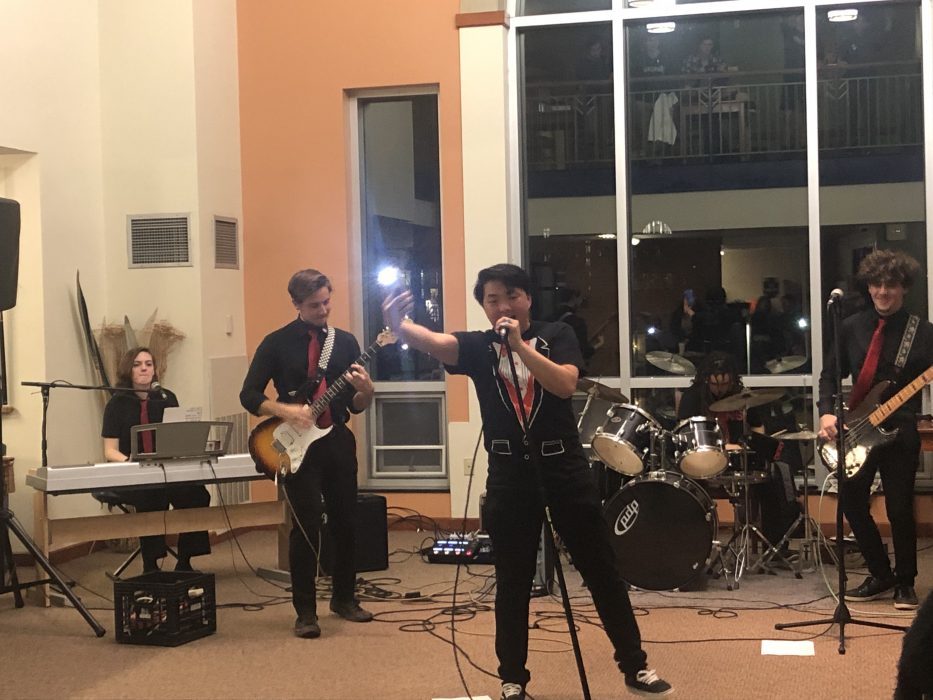 Loud drums and quick bass could be heard through the whole dorm as the band performed songs like “good 4 u,” by Olivia Rodrigo, and “Holiday,” by Green Day.

The band also played Green Day’s “Boulevard of Broken Dreams,” which was the inspiration for the dress code.

The band kept its audience members on their toes during the set by transitioning between songs with some clever word play — usually ending each segue with the title of the next song.

Every band member got a moment in the spotlight, with a standout moment when the band’s drummer, Dacanay, got up and sang “When I Was Your Man” by Bruno Mars.

For the last song, the lead singer, Hooper, ran up to the second-floor balcony and popped a small confetti cannon at the end of “Scooby-Doo, Where Are You?”

Hooper said he was happy with the event and is excited for more.

“The crowd was really interactive,” Hooper said. “I cannot wait for it to happen again.”

Hooper was a singer in another band, but said he set out with The Last Rebellion to grow the music community on campus through events like these.

Sophomore Meghan DePuydt danced along to many of the songs.

“We got some classic songs by some talented guys — and gals,” DePuydt said. “A great way to end the weekend.”

Though the band was energetic, it encountered hiccups during the performance. Many students were surprised upon entering the dorm to see a rock concert underway.

Totus Tuus Maria household even received several intents during the concert, crowding through the already tight lobby. In addition, Hooper’s voice was difficult to hear over the instrumentals.

Hooper is hopeful for the future of the budding band.

“Keep a lookout for more shows coming soon,” he said.