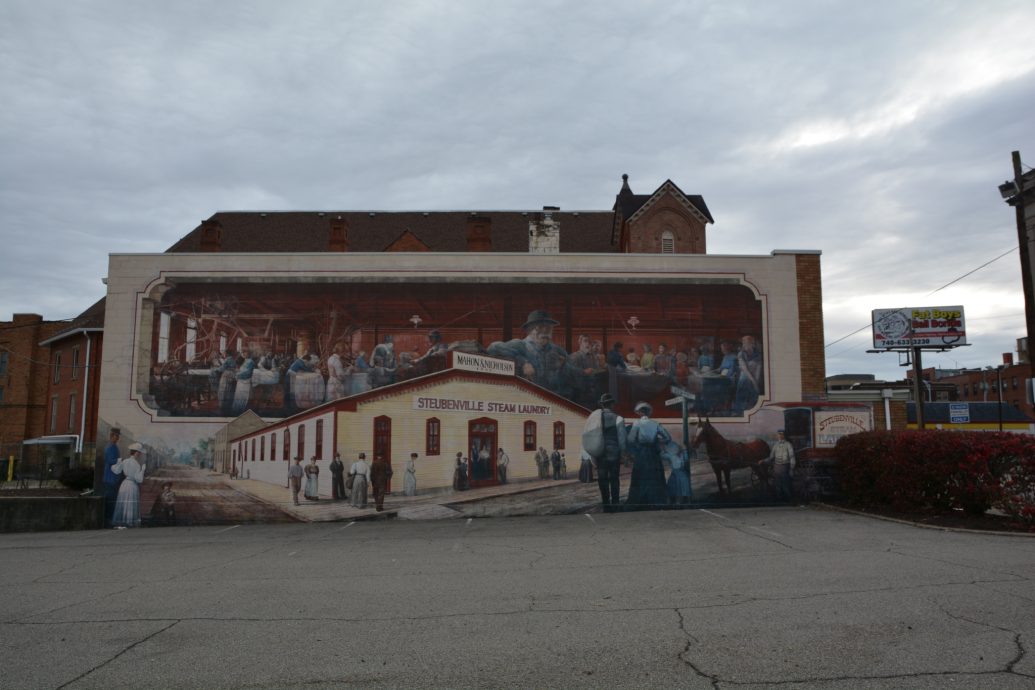 If you’re in Steubenville, walk north on Third Street past Market Street and you’ll encounter a massive mural of Steubenville native Moses Fleetwood Walker, the first African-American baseball player in the major leagues.

It’s hard to miss — Walker’s clean white shirt and jet-black hair sharply contrast with the bright red background onto which he is painted, making the mural practically jump out at you as you walk by.

And “Moses Fleetwood Walker” isn’t the only mural that graces Steubenville’s streets. Completed in the fall of 2018, it is just one of 25 paintings that can be found on buildings all around the city, from downtown Steubenville all the way to the Hollywood City Center.

Although it’s known for its paintings today, Steubenville hasn’t always been the “City of Murals.” The process of adorning Steubenville began in 1986, when officials came up with the idea as a way to attract tourists to Steubenville, Mayor Jerry Barilla said.

Barilla said that a committee quickly settled upon an historical theme both to honor Steubenville’s history and to teach tourists coming into Steubenville about the city’s historical significance.

“We try to portray our history through the people that have made us proud,” Barilla said.

By the end of 1986, the first mural was completed. Painted by Michael Wojczuk, “Market Street Mural” on Market Street near Fifth Street is a window into turn-of-the-century Steubenville. Depictions of contemporary transportation — a trolley, a bicycle and a horse and buggy — draw the viewer into the charm of early 1900s Steubenville and set the stage perfectly for the many historical scenes that were soon to come.

As time progressed, more and more murals were commissioned. “Franciscan University of Steubenville,” painted by Alan Wylie on Fifth Street near Market Street in 1989, illustrates the university’s history with six separate images: four depict scenes from the university’s campus, one depicts St. Francis of Assisi, the university’s patron, and the last depicts four of the university’s presidents with John Mussio, the first bishop of the diocese.

“1897 Centennial Arch,” painted by Eric Grohe in 1992, shows one of the four arches built in celebration of Steubenville’s first hundred years. Painted on the northeast corner of Washington and Fifth Streets, this 100- by 30-foot mural appears so three-dimensional that Fort Steuben volunteers say they have seen birds trying to fly into it.

Perhaps the most well-recognized mural in Steubenville is the one painted by Robert Dever on the wall of Kroger in the Hollywood City Center in 1997 to celebrate singer and actor Dean Martin, one of Steubenville’s most famous natives. This mural is composed of various scenes from Martin’s life, all arranged around an image of the celebrity in the middle of a song.

These monumental artworks, with their bright colors and engaging subjects, soon began to attract visitors to Steubenville, quickly earning it the nickname of “City of Murals,” and by the late 1990s, there were already over 20 murals lining its streets.

According Historic Fort Steuben records, however, the city came to find that the mural project was difficult and costly to maintain. Monetary difficulties at the beginning of the millennium led to its abandonment, and the murals fell into disrepair, with some being lost entirely.

But the “City of Murals” was not ready to see its claim to fame die so quickly, and in 2015, Historic Fort Steuben took over the project and began to take steps to resurrect it.

That very year, Steubenville was graced with a new mural, painted by Canton artist Ruston Baker, which once again reminded the city of its historical legacy. The 35-foot tall, 70-foot wide “Civil War Telegraph Office” depicts former president Abraham Lincoln in the telegraph office of the War Department in Washington, D.C. Accompanying him are two men — Edwin Stanton, secretary of war, and David Homer Bates, a telegraph operator — both Steubenville-born.

And since 2015, the project has been moving at a brisk pace. The latest mural, a tribute to Tuskegee Airmen and Steubenville natives Jerome and Ellis Edwards, which was completed just this past summer, is the third mural to be commissioned by the city in just over a year.

“These young men put their lives on the line for our freedom as a nation,” Barilla said of the brothers, who were members of the first all-black squadron in the U.S. Air Force in World War II. “Yet they were still discriminated against when they returned home.”

Barilla said he hopes that by honoring the brothers with their own mural, Steubenville can repay them for their service to their country during the war.

With the “Tuskegee Airmen” just finished and several other murals already being considered, Steubenville officials are hopeful that the “City of Murals” will soon come back into the public eye for its unique commemorations of its distinguished heritage.