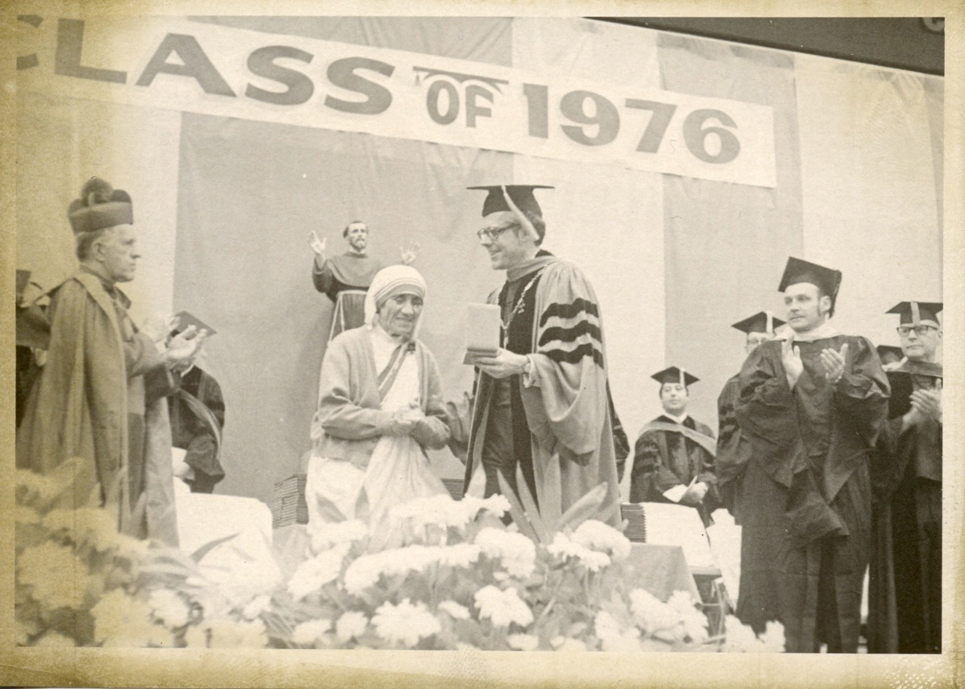 On Sunday, September 4, thousands gathered in St. Peter’s Square in a spirit of prayer and excitement, eagerly anticipating the canonization of a beloved 20th-century saint: Mother Teresa, now formally known as St. Teresa of Calcutta.

St. Teresa presents a challenge to Franciscan University students, as well as the whole world, to follow in Christ’s footsteps, even if it be with worn feet.

In 1976, St. Teresa gave the commencement address at Franciscan University. She was also a recipient of the Poverello Award, an honor given by the university to an individual or organization that attempts to alleviate poverty while sharing Christ’s love with those they serve, and who exemplifies the values of St. Francis.

But her involvement with Franciscan University reaches beyond her achievements. St. Teresa has influenced student’s hearts.

“Holiness is Christ-likeness,” said sophomore Michael Scanga. “If we’re called to be like Christ, we must do what He did. We must wash each other’s feet and that’s what (St. Teresa) did in her life.”

Sophomore Sarah Beaver also described St. Teresa as a Christ-like figure. Beaver gave the saint’s feet as an example. They were deformed, because when the Missionaries of Charity, the religious order St. Teresa founded, received shoe donations, St. Teresa would take the worst shoes, giving the better ones to the poor.

“She put herself last,” said Beaver. “Everything she did was for someone else and she always made sure everyone had what they needed before she even thought about herself.”

St. Teresa’s story is unique because her process of canonization began immediately following her passing in 1997. This was notably earlier than other saints, due to her faith-filled fame. On the first anniversary of her death, an Indian woman was cured of an abdominal tumor, and this was attributed to her intercession. This would be the miracle that beatified her.

“We have to stop settling for mediocrity,” said Brough. “Her witness calls us on to not be passive in faith. Many people have a tendency to become slack and no longer reach for holiness…St. Teresa says ‘No, step it up. Stop making excuses.’”

On December 17, 2015, Pope Francis approved a second miracle, in which a Brazilian man diagnosed with a brain infection awoke from a coma before going into surgery, crediting St. Teresa’s intercession in his healing. This cleared the way for her canonization.

As the saint said of herself, “I must be willing to give whatever it takes to do good to others. This requires that I be willing to give until it hurts. Otherwise, there is no true love in me, and I bring injustice, not peace, to those around me.”

2016-09-16
Previous Post: The Rev. Gregory Plow, TOR, reflects on his ministries, new and old, at Franciscan
Next Post: Savage speaks on the complementarity of the sexes