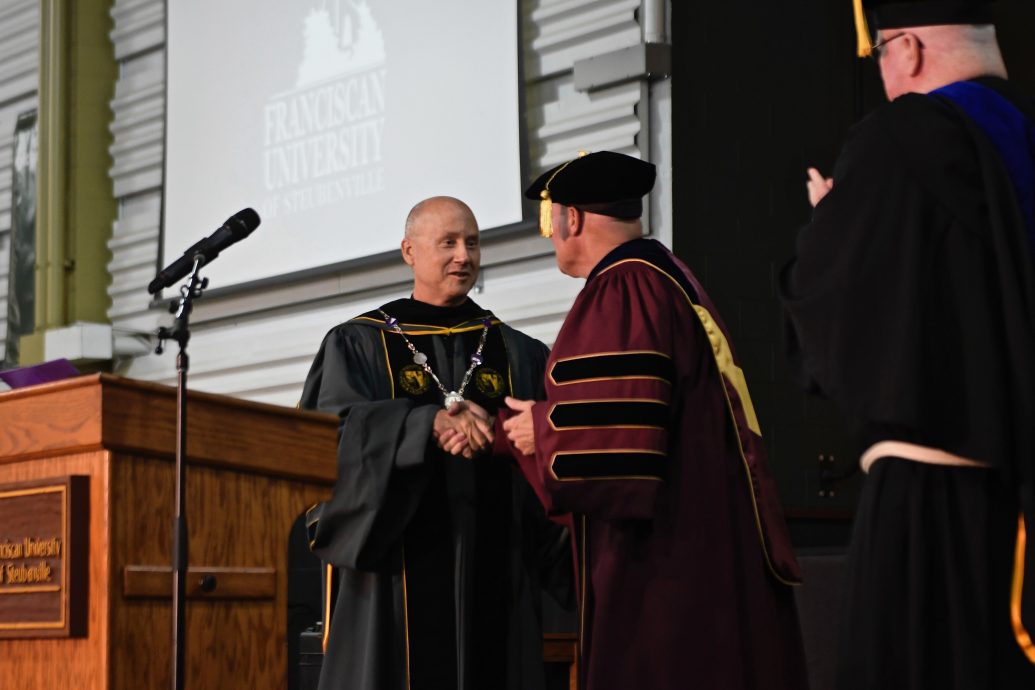 The Rev. Dave Pivonka, TOR, was officially inaugurated as Franciscan University of Steubenville’s seventh president during a special ceremony, followed by a Mass, Friday afternoon.

The inauguration ceremony featured speakers representing different groups of people whose lives have been touched by Pivonka, followed by Pivonka’s formal installation as president and his inaugural address. The speakers lauded Pivonka for his commitment to the faith and the strong personality that he brings to his new leadership role.

Daniel Kempton, the vice president of academic affairs, began the inauguration ceremony. When Kempton first said Pivonka’s name, the crowd exploded into a half minute of cheers and applause. Following the national anthem and an opening prayer, Kempton invited the first speaker forward.

The Rev. Joseph Lehman, TOR, who is the minister provincial of the Sacred Heart Province and chairman of the board of trustees, commended Pivonka’s character. Lehman, Pivonka’s longtime friend, made the audience laugh along with his story about a time that Pivonka misspoke in an effort to speak Spanish in Spain.

“Even though Father Dave might struggle at times to speak foreign languages, … what I love about Father Dave is he never struggles to speak about his relationship with God,” said Lehman.

The final speaker before Pivonka was installed as president was senior Derek Markle, student body president. Markle explained that the upheaval students felt at the prospect of a new university president was initially difficult but that Pivonka had made the change a happy one.

“I know that I speak on behalf of the student body when I say that we, as students, are prepared for this to be the best year that we have experienced at Franciscan yet, due to Father Dave,” said Markle. He invited those gathered to welcome “not only our new president but more importantly our new spiritual father: Father Dave Pivonka.”

In his inaugural address, Pivonka spoke passionately about the university and its mission: “The purpose for our existence has always been and will always be Jesus. It’s about his work; it’s about his mission and us participating in that.”

“I firmly believe that you deserve to be formed in the full truth and in the light of the Gospel and in the teachings of the Church. And I pray that you will always know that I love you enough to never waver from this. At Franciscan University, I commit to see that you become the saint of God that you were chosen to be,” said Pivonka.

The inauguration was touching for all who attended, especially those that had known Pivonka previously. Mother Iliana, of Christ the Bridegroom Monastery in Burton, Ohio, attended the inauguration because she knew Pivonka as her first spiritual director.

“I’m very moved,” she said. “While the student was speaking, he talked about Father Dave as a spiritual father, not just the president, and that resonated with me.”

Current students, also, were touched to be a part of such a historic event for the university. Junior Julia Nagy sang at the inauguration with the Schola Cantorum Franciscana. “Being able to sing for the inauguration of Father Dave was an incredibly special experience,” she said. “Father Dave will do amazing things as president, and I am so grateful that I was given the opportunity to sing and thank the Lord for his presidency and welcome him as our spiritual father.”