Speaker shares how St. Joseph can be spiritual father for all 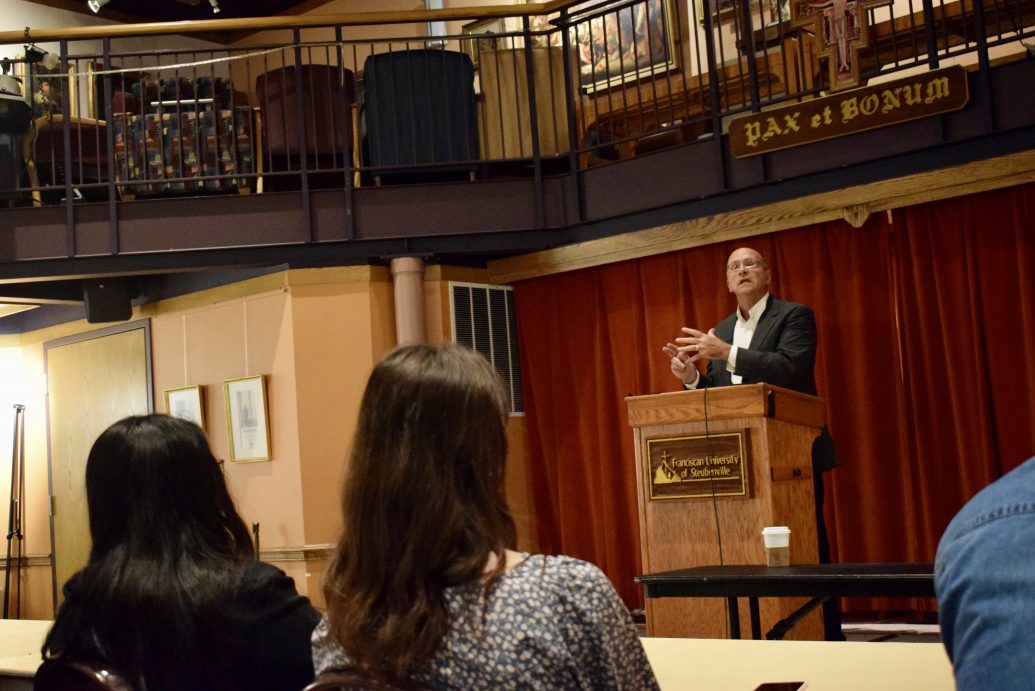 A theologian from Franciscan University of Steubenville said Thursday that anyone who does not have a devotion to St. Joseph should try to know him better and learn to test his renowned intercessory power.

Mark Miravalle, who holds a doctorate in sacred theology, gave a talk entitled “St. Joseph: Meet your Spiritual Father” that said Joseph is the greatest saint after the Blessed Virgin Mary and a father to all Christians.

Miravalle said that although St. Joseph is typically known mostly for his silence and devotion to Mary, there is far more to his story that everyone should be familiar with, especially his vocation as a father.

What means the most in fatherhood, said Miravalle, “is the sacrifice of a true loving father. That was Joseph to Jesus. … He gives everything to Jesus that a father would give except the biological dimension.”

Miravalle said St. Joseph was the ideal protector of Jesus.

“Do you ever get overwhelmed by your responsibilities?” said Miravalle. “What about being responsible for the savior of the universe? … (Joseph) is the protector of the Word made flesh.”

“Jesus wants you and me to have the same custodian during our earthly life as he had,” said Miravalle.

Miravalle delivered a challenge: “If you personally have not experienced the intercessory power of St. Joseph, then test him. Test him with something important.”

Miravalle told a story of a woman who devoutly prayed an extensive novena to St. Joseph for the intention of finding a husband.

When the last day came and nothing had happened, the women became angry and threw her statue of St. Joseph out the window of her apartment. She hit a policeman, who came up to investigate the cause of the flying statue. Nine months later, they were married.

Miravalle said, “I’m telling you, A: that’s a true story, and B: ladies, I don’t want to go by the dorm and see St. Joseph statues flying out the windows.”

Miravalle said there are several devotions that can be done to St. Joseph, including honoring St. Joseph every Wednesday, praying his litany and doing the consecration.

Sophomore Jency Clement said what struck her the most was the strong Catholic devotion to St. Joseph.