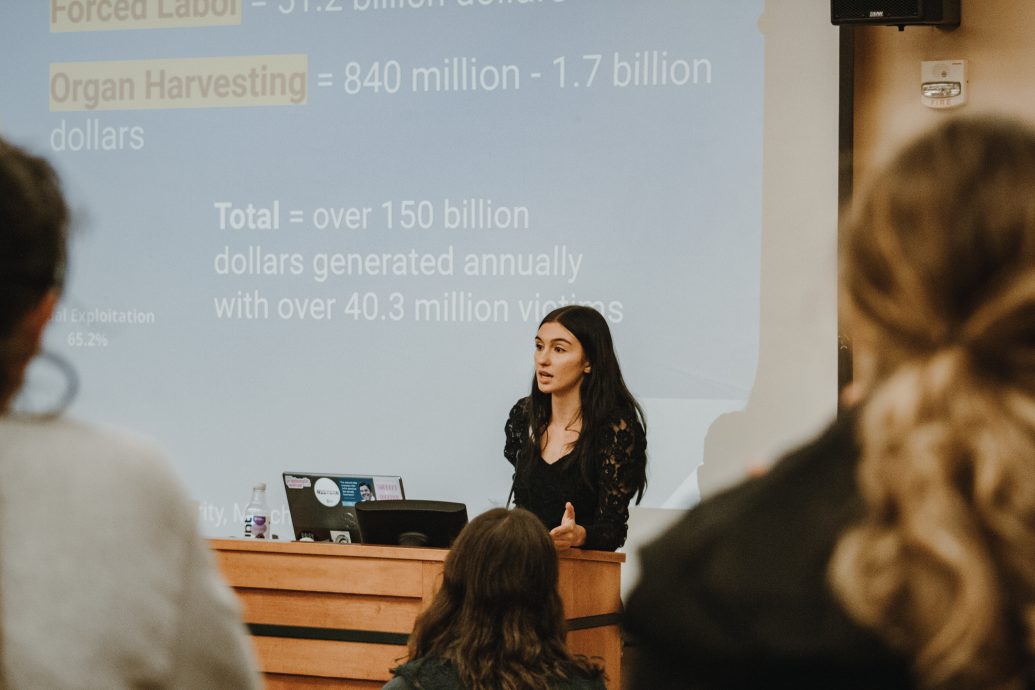 Human trafficking is not about the stranger danger narrative, said a speaker in Pugliese Auditorium Oct. 28.

Sophia Fisher, founder of the digital campaign “Stop the Demand” and a board member at Atlantic Counter Trafficking, spoke at Franciscan University of Steubenville about the fastest growing crime in the world: human trafficking. She has spoken at numerous universities about the topic.

Before learning about the issue in high school, Fisher thought that human trafficking was “always done through strangers. It wasn’t familiar persons,” Fisher said.

This information inspired her to abandon plans to become a missionary after high school. Instead, Fisher dedicates her time to spreading awareness for human trafficking.

After sharing her story, Fisher said that a lot of human trafficking victims don’t even know they are victims. Traffickers target their vulnerability, making false promises that sound good, like offering money or a better living situation, Fisher explained.

Fisher pointed out that U.S. federal law did not recognize human trafficking as a crime until 21 years ago. The two most common types of trafficking in the U.S. are sexual exploitation and forced labor.

Fisher noted the “huge gap between the actual crime itself and reporting it.”

“The problem lies with what’s actually happening,” said Fisher. “We recognize it as a crime, but did you know that less than 1% of victims are ever rescued and that very little cases are ever reported?”

Sophomore Rebecca Sullivan said, “I thought it was very informative. It (shone) light on different aspects that you wouldn’t think of, like how it’s usually someone that you know that traffics you.”

The talk was sponsored by the Turning Point USA chapter at Franciscan University.