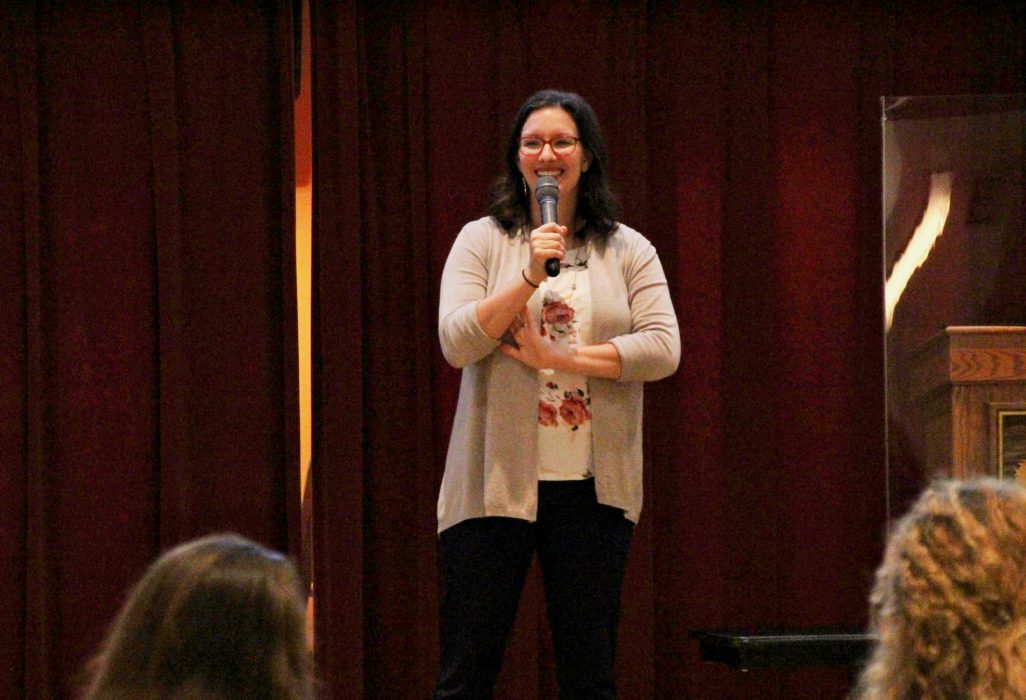 A Catholic speaker gave tips for both men and women who are actively pursuing vocations, particularly to marriage, encouraging students to have confidence in discernment during her second talk of the day, Monday evening in the Gentile Gallery.

Kelsey Skoch, international speaker and veteran FOCUS missionary, addressed about 30 students on discernment as a continuation of the Gift of Human Sexuality Symposium. She encouraged students to find peace in the vocation that God has in store.

“If you have a fear about your vocation, it’s not your current vocation,” Skoch said. “When (God) calls you to your vocation, there’s going to be immense joy.”

Skoch provided three keys as a baseline for what to consider when discerning. The keys – the fact that discernment is on God’s timeline, the importance of getting to know the Father and the effort to intentionally pursue the vocation – all play an important role in discovering what God has in store for each person.

Skoch focused in particular on the third key, the intentional pursuit of a vocation, when giving tips for those discerning marriage when dating.

“Say ‘Do you want to go on a date with me?’” Skoch advised the male students. “Be very clear what your intention is and your expectation.”

Skoch also warned students against assuming anything about couples, such as assuming that a guy and girl talking one-on-one are dating, saying that this only feeds into the pressure of the dating culture.

“We get so frustrated with the dating culture, and then we’re the ones cultivating it,” Skoch said.

In addition, Skoch emphasized the importance of personal growth, reassuring that it is OK not to date while in college if a student needs to work on him or herself.

“If you don’t feel called to date, don’t feel like you have to justify it to anyone,” Skoch said, “but be doing the work behind the scenes.”

Sophomore Maryanne Macdonald was particularly touched by Skoch’s tip to get to know God before and while pursuing a vocation.

“I feel like we all forgot this and need the reminder!” Macdonald said.

2020-09-02
Previous Post: Chastity speaker addresses importance of chastity, being made for love
Next Post: Speaker shares tools for habitual purity