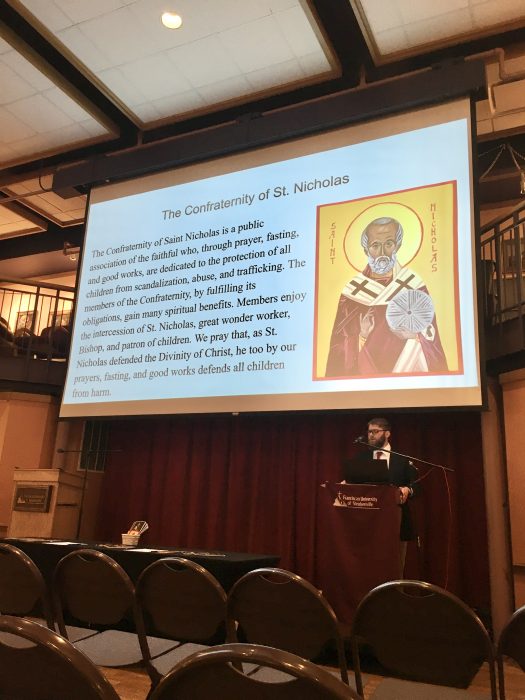 The founder of a confraternity dedicated to the protection of children asked others to pray through the intercession of St. Nicholas for an end to the scandalization, abuse and trafficking of children Wednesday at 7 p.m. in the Gentile Gallery.

Adam Marquart, a finance student at West Virginia University, gave the talk, entitled “Protecting Children in a Pedophilic World.” The talk promoted the Confraternity of St. Nicholas, which Marquart said is dedicated to the protection of and prayer for children through St. Nicholas’ intercession.

Marquart described the talk’s format, saying, “I am going to introduce the purpose … that is (to raise awareness of) the issues against children in our current age — the ways that our society and the world try to scandalize, harm, abuse and traffic (them).

“Because of these horrible things, we need to — we ought to — pray for (children) in some united manner, and that is why I started the Confraternity of Saint Nicholas.”

Throughout the talk, Marquart prayed the seven sorrows of Mary with attendees “because of the sorrowful nature” of the issue at hand.

“How did we get here?” Marquart said. “Sixty years ago, perhaps even 40 years ago, these sort of headlines would have been absolutely outrageous. “

Marquart affirmed that the confraternity is a “spiritual answer” to these issues. Furthermore, he said he was surprised that a confraternity for protecting children did not already exist until he created his.

The confraternity was established with the permission of the Most Rev. Mark E. Brennan, bishop of the diocese of Wheeling-Charleston. Marquart said that Brennan told him “the war against the family is primarily spiritual warfare, and (it) therefore must be fought with spiritual means primarily.”

Afterward, Senior Rebecca Violet said the talk “was very profound and very much needed. It was pulling back the mask of society to reveal the ugly face of Satan.

“The first step to solving a problem is awareness, and I really hope that this (confraternity) becomes more widespread and very successful in prayers for the safety of children,” she said.

The event was sponsored by the Square Dance Club.