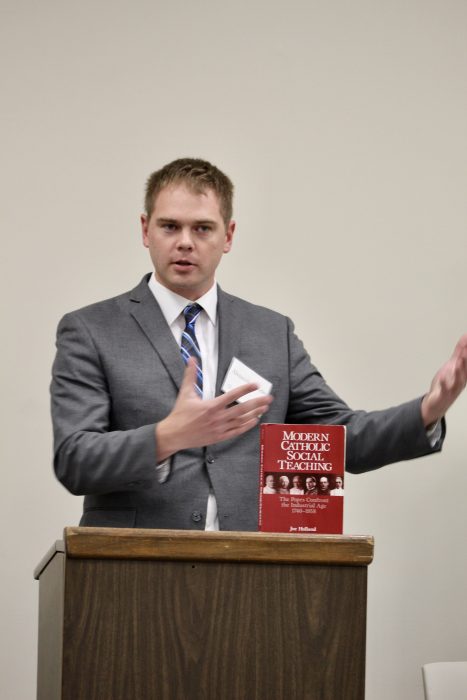 A visiting professor spoke on philosophic arguments for the sanctity of human life during the Friday, Oct. 25 Academic Lecture in the Gentile Gallery.

“The very presence of one human being to another, even when hidden from immediate view, makes a normative claim upon any other human being who has the power to either harm or help,” said Christopher Tollefsen, philosophy professor at the University of South Carolina, as he quoted Jewish Rabbi David Noland during his talk.

The presentation saw a sizable number of students and professors alike. The talk revolved around three questions when it came to the sanctity of human life: the issue of scope, the issue of exception and the issue of transcendence.

When touching upon the issue of scope, Tollefsen said that, according to natural law, life is an aspect of one’s well-being and should not be attacked by another who is in similar likeness. Tollefson explained that animals don’t have “the shared pursuit or enjoyment of the common good” and, when one encounters a non-human animal, the encounter is never on the same intensity as that when one is face-to-face with another person.

In the third topic, the issue of transcendence, Tollefsen discussed the idea that God alone is the only one who can take life since he is the one who gives it. He said, “God is the giver of life, (which) is an articulation of the sanctity of human life.”

The presentation proved enlightening to those who listened and gave them an even deeper perspective of the dignity and value of the human person.

Graduate student Emma Sisk said that the presentation “was a very relative topic given the current climate of society where human life is disposable if it’s inconvenient or unwanted” and that Tollefsen “presented some very interesting insights on the inviolability of the right to life of human persons.”

This week’s installment of the 2019 Academic Lecture Series was included in the Society of Catholic Social Scientists Annual Conference.