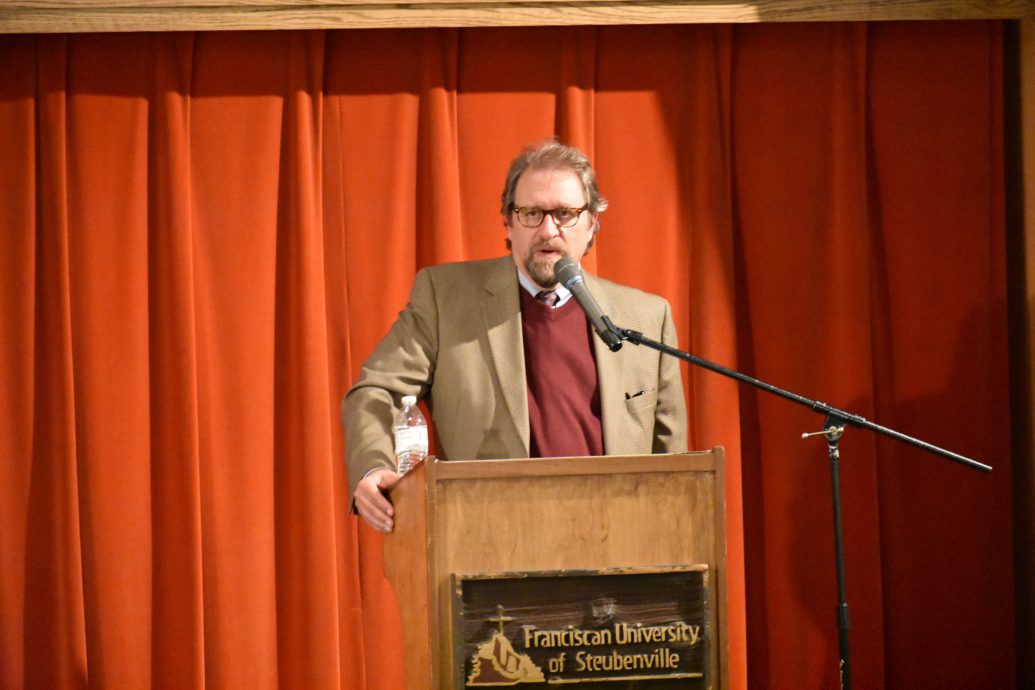 A world-renowned G.K. Chesterton expert filled the Gentile Gallery with wit and wisdom when he spoke on the link between St. Francis and Chesterton on Monday, April 14, at 6:30 p.m.

In his talk entitled “The Advantages of Seeing the World Upside Down,” Dale Ahlquist, who holds an honorary doctorate from Thomas More College of Liberal Arts, enumerated similarities between Francis and Chesterton.

Ahlquist listed three ways Francis and Chesterton are alike: they both see the world upside down, they both have an eminent joy that marks their faith and they both practice asceticism.

According to Ahlquist, Chesterton described Francis as the tumbler of God. “In the act of doing this summersault, you have that one split second where, Chesterton says, you are seeing the world as it really needs to be seen because you’re seeing it upside down,” said Ahlquist. “You get the impression of everything hanging on the mercy of God.” Ahlquist explained that this description of Francis’ worldview applied equally well to Chesterton himself.

Another similarity is that both of these men were remembered for their joy, which was founded on thanks, said Ahlquist. Both men followed Christ’s commands very seriously, and because of this, they found the freedom to be joyful, he explained.

The third similarity puzzled the intrigued audience. “What could possibly be the connection between G.K. Chesterton and asceticism?” Ahlquist inquired.

Ahlquist explained that a character appears in one of Chesterton’s books who practices a strange sort of self-denial in which “he only pretends to be a man of pleasure so that the pleasures of good food, good wine and good cigars can safely be enjoyed by others.” Ahlquist proposed that perhaps this character is a figure of Chesterton himself, which would make him a strange but true ascetic.

Students of all levels of familiarity with Chesterton enjoyed this talk. Sophomore Fred Williams said that he has never read any Chesterton but was inspired to look into his works. He also appreciated the explanation of how Chesterton was “able to put Franciscan spirituality into writing … (and) convey that with such truth.”

Claire Richards, a master’s student who is a part of the Chesterton Society, also noted the emphasis on truth. “Dale and his expected style of wit and humor bring timeless truth that G.K. Chesterton has taught him. … His humility and willingness to answer questions and be a fool for God, himself, is inspiring.”

This talk was hosted by the Chesterton Society.