Sister returns to campus with words of wisdom, heart to serve 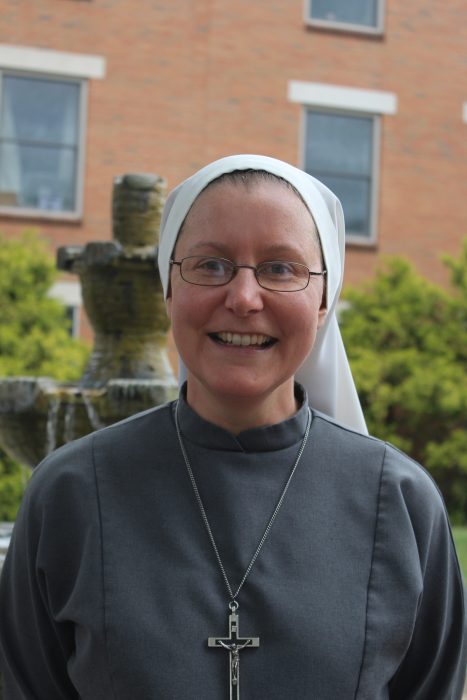 In love with horses, the great outdoors and God, the new chaplain of Marian Hall is one of many Franciscan University of Steubenville alumni who has returned to the campus in a religious habit.

Sister Elizabeth Beussink, TOR, graduated from Franciscan with a degree in theology and catechetics. In 2007 she joined her religious community: the Franciscan Sisters, TOR, of Penance of the Sorrowful Mother, who have served on campus for over 30 years.

Beussink was first assigned at her alma mater in 2010, after which she spent three years in Gaming, Austria as Sister Servant of the sisters’ house at Franciscan’s study abroad program from 2017 to 2020.

Beussink is passionate about the community on campus and said her favorite thing about life at Franciscan is “getting to journey with … the students.”

Beussink said she started to discern her vocation to religious life in high school.

“It was during high school that I realized it was my call,” she said.

She explained that in college it became more of a question of “when and where” she should enter. Before she began to seriously discern her call, Beussink said she dealt with a lot of “misperceptions of what religious were.”

She decided, “I would not become a religious sister unless I knew I wasn’t called to marriage.”

Determined to exhaust the possibility, Beussink said she gave God a list of what she wanted in a relationship. Sure enough, a young man came along who perfectly fit the description. After dating for some time, Beussink said, “My heart was longing for something more.”

“Why am I not happy?” she recalls wondering.

After a time of prayer and discernment, Beussink said the Lord “used bridal language” to call her, and that made all the difference.

“Yes, I will be yours,” she replied, but she was still dating the young man.

“If you want me, then you’ve gotta fight for me,” Beussink said she told God. “Make him break up with me!”

She was probably the happiest girl to experience a breakup a few weeks later, Beussink said. She entered the Franciscan Sisters, TOR, soon after.

If there is one fun fact Beussink wants students to know about her, it is that her favorite activity is horseback riding.

While there aren’t many horses in Steubenville, Beussink said her passion remains for horseback riding and for horses in general.

Born and raised in the countryside of Jackson, Missouri, Beussink said she found the outdoors to be her ideal place to connect with God.

She remembers a time in her childhood when she and her friend were “off gallivanting around … (and) we’d play tag on horses in the peach orchard.”

Unfortunately, that peach orchard was not part of the friend’s property, and Beussink recalls that fateful hour when their “gallivanting” days were over. Riding through the orchard, Beussink said she and her friend heard the distant sound of a tractor. She said that they “(flew) through the woods, trying to get away.”

While she looks back with fondness on her country home, Beussink is happy to be back on campus. “It’s a gift to be able to give back,” she said.

Beussink can be found in her office in Marian Hall or visiting in St. Thomas More Hall in the Mary Spouse of the Spirit household wing. As advisor of that household, she offers advice and fellowship to young women who are embarking on the same journey that brought her to her vocation.