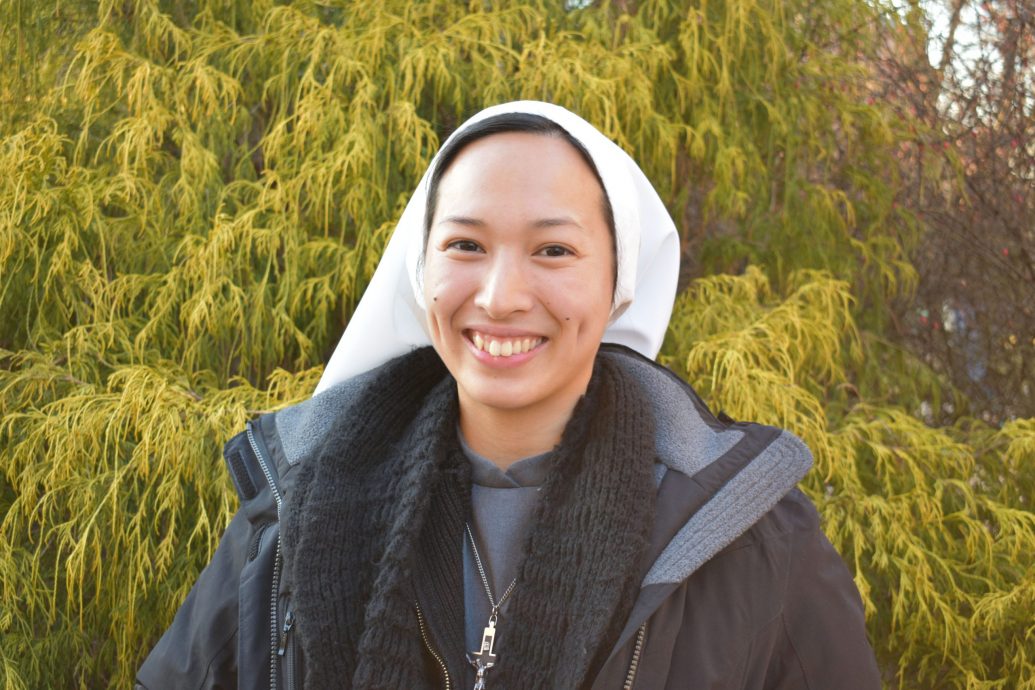 “I actually am one of those reckless followers for Jesus. I’m a dropout for Jesus,” Sister Philomena Clare DeHitta, TOR, said. “I took the spring semester of my freshman year to discern, so I ended up visiting with the TOR sisters here and I found myself applying.”

Before becoming a “dropout for Jesus,” DeHitta grew up in Maryland with three sisters and one brother. There, she enjoyed playing games, swing dancing and playing soccer recreationally.

She was also surrounded by Maryland’s thriving Catholic community. DeHitta said, “I remember being 10 or 12 and being struck by the Cristero martyrs and asking: could I do the same thing?”

One of the formational points in DeHitta’s discernment was in her freshman year of high school when her family began attending charismatic prayer meetings. “At first, I had the typical Catholic reaction: is it okay to be here? Does the pope know?” DeHitta said. “But while opening up in worship, I realized I was made for this; this is what I am going to be doing – this is going to be eternity. And having that thought I realized I just wanted to worship in front of the Eucharist. But I didn’t know that was a thing.”

Later, while flipping through a nun catalog, DeHitta saw just what she wanted: a picture of the TOR sisters worshipping charismatically before the Eucharist.

“I was just like, ‘oh my goodness. This is a thing. This is my heart’s desire and they’re doing it,’” DeHitta said. “I was in eighth or ninth grade, so I wasn’t about to run off or anything, but I dog-eared the page and put it on my shelf.”

DeHitta was exposed to religious life from a young age, as the Baltimore area is filled with religious communities. “My mom would take us to the Little Sisters of the Poor for daily Mass, my friends went to a school run by the Nashville Dominicans and we would go to conferences and encounter the Daughters of St. Paul, so religious life wasn’t this foreign concept to me,” DeHitta said. “I knew it was an option.”

After graduating high school, DeHitta continued considering religious life, and the summer before her freshman year of college, DeHitta prayed a novena to St. Philomena.

“I was praying for my vocation, kind of like a rote prayer at that point. I just threw it onto the laundry list of intentions for the time,” DeHitta said. “But she answered. Philomena gets it done.”

At the end of the novena, DeHitta went to Mass. It was St. Philomena’s feast day, as well as the feast of St. Clare: Aug. 11.

“The priest said the communion antiphon for St. Clare. I was kneeling there, preparing for communion, and the priest said the words: she has chosen the better part. And I felt like I’d been hit by a ton of bricks,” DeHitta said. “I didn’t have a shadow of a doubt that was (the Lord’s) invitation.”

During her first semester of college, DeHitta figured that she had a plan for her life. “I was dead set; I was like, ‘I’m going to get a degree; I have to prove my worth.’ And he had to wrestle that from me too.”

“There’s so much pressure to prove yourself, prove your worth and contribute to society,” DeHitta said. “And coming into the community without a degree was so hard; I just felt my poverty. I had nothing to offer him except myself.” Nevertheless, DeHitta knows the importance of God’s timing in her life. “He knew how much worth I put into my accomplishment; he knew I was dying to prove myself and he didn’t want me to think he called me for anything I could do,” DeHitta said. “He wanted me to know he wanted me for me and he wanted me to know my poverty.”

“Everything I am able to do now I know is by his gift and grace,” DeHitta said. “I ended up learning guitar as a novice and the Lord really graced that gift so I could lead worship. He did not want me to think that anything that I could do or give was a reason for his love.”

At Franciscan University of Steubenville, DeHitta has been serving as a hall chaplain in Sts. Kolbe and Clare Hall.

“It’s been such a beautiful experience here in Kolbe-Clare because it’s just such a warm community,” DeHitta said. “We’re just so blessed here that there are students who desire a prayer life and want to grow in it, and if they want to seek that with more intentional direction and help, all the chaplains are willing.”

DeHitta’s ministry has been a blessing to students and to herself as well.

“It’s a real experience of spiritual motherhood,” DeHitta said. “Once, I prayed with a student and there was an amazing transformation between the start and the finish. God just worked so powerfully and I remember going out to my car and being like, ‘There’s nothing else.’ To see this student come to life, to see her walking so heavy of heart and to see God lift those burdens and set her free and breathe new life into her — it was amazing.”

“I’m so thankful for this privilege. It’s a privilege to pray with students and to see them experience God’s love and say yes to that love,” DeHitta said.