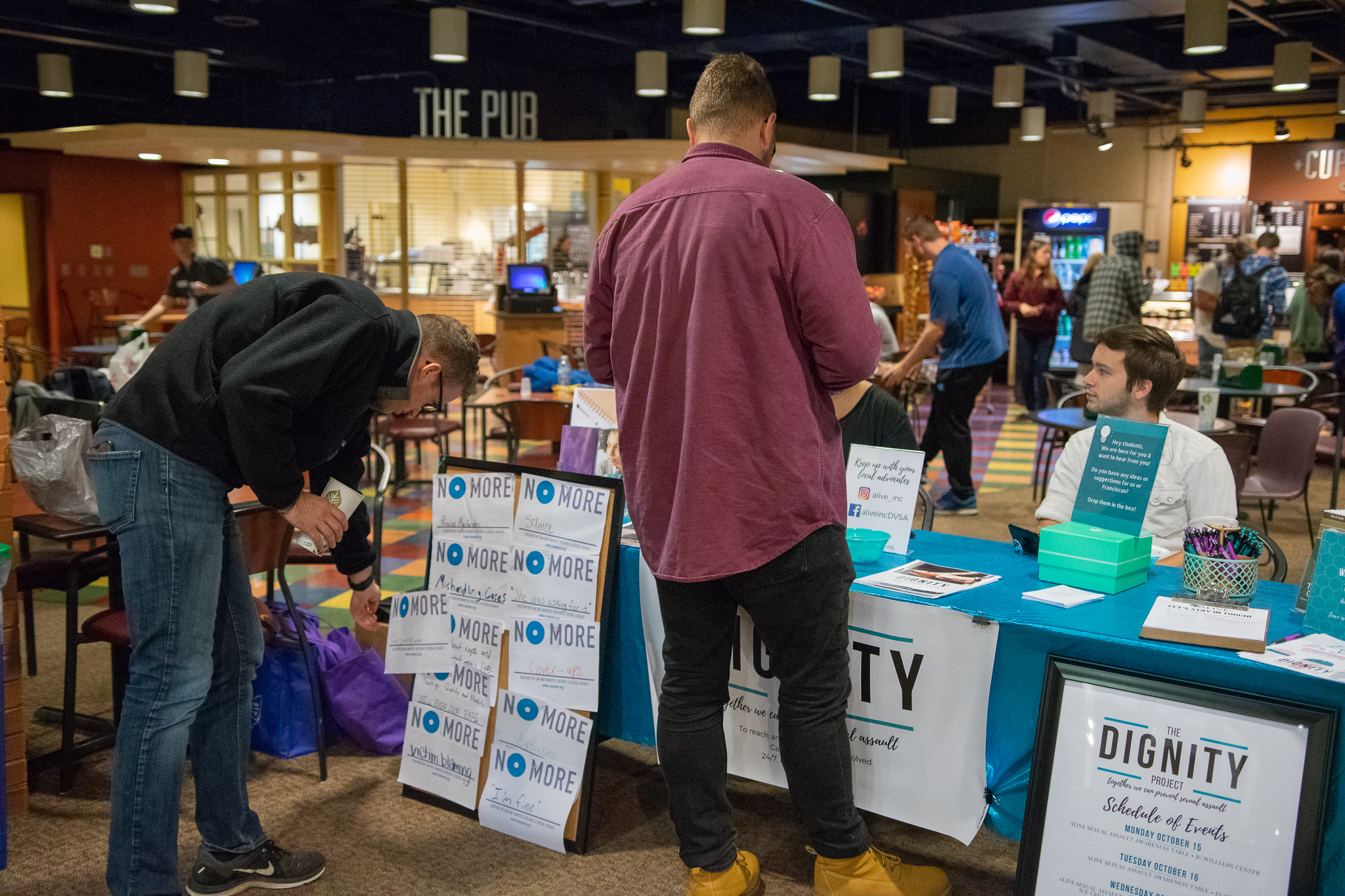 During the week of Oct. 15-20, a sexual advocacy organization called Alternatives to Living in Violent Environments (ALIVE) created a presence on campus at Franciscan University of Steubenville to improve awareness and education on the dangers of sexual assault and the importance of bystander intervention.

The week-long occasion, called the Dignity Project, included several events, information tables in five locations across campus and multiple advocates from ALIVE who were available to speak with individual students on Title IX issues.

Chantal Hust, ALIVE coordinator for Jefferson County, expanded on bystander intervention to students she encountered throughout the week, highlighting the impact even a small response can have on a situation.

“Direct, distract (and) delegate” are three strategies to combating a dangerous situation, said Hust. If a direct approach seems impractical, a bystander can create a distraction by spilling a drink or changing the topic of conversation. In a particularly tricky situation, bystanders can notify a suitable authority who can take control of the situation.

“The number one thing would be noticing what’s going on around you and making sure that you don’t feel like it’s not your business to get involved,” Hust said. Every person, no matter who he or she is, has the ability to resist a culture of sexual assault, racism or abuse.

Hust had simple advice for those who weren’t sure where to start: don’t laugh. “If someone tells a sexist joke, don’t laugh,” Hust said. Even small actions can effect change in culture.

On Thursday, Oct. 18, Hust gave a presentation on bystander intervention for students in the International Room.

On Friday, Oct. 19, Christ the King Chapel hosted a Healing Mass celebrated by the Rev. Shawn Roberson, TOR, who emphasized God’s healing mercy and desire to touch every wound. Dozens of attendants received healing prayer from the four priests present at Mass, allowing God to heal their wounds sustained from suffering from others’ misconduct or cruelty, sexual or otherwise.

From 1-4 p.m. on Saturday, Oct. 20, Patrick LeMasters offered a training session on self-defense in the Aerobics Room of Finnegan Fieldhouse. LeMasters, who is a third-degree black belt in taekwondo and owns the LeMasters Christian Martial Arts Academy, taught students how to defend themselves in time of crisis or assault.

Over the course of the week, Hust was available to speak with students in various locations on campus such as the J.C. Williams Center, Egan Hall and Finnegan Fieldhouse. Information tables across campus glittered with pens and bracelets emblazoned with ALIVE’s logo while fliers provided information on survivor support groups and other services offered both on and off campus.

This is the second year ALIVE has hosted an awareness week on campus and the third time they have offered “tabling,” their word for raising awareness through information tables and personal conversation. Once they garner enough interest and support, Hust said that they “hope to do (the week-long event) once a semester,” including more “active awareness” opportunities like expanded self-defense classes and larger presentations.