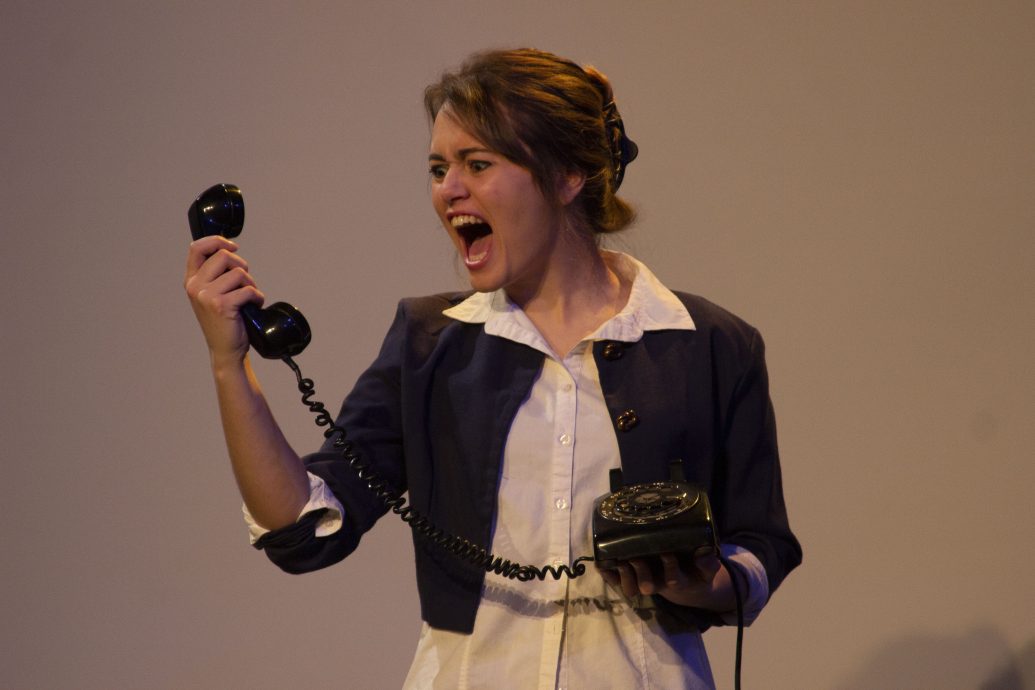 With only a month left of the semester, senior theater majors are buckling down and cleaning up their acts in preparation for the final curtain call of the year and of their careers here at Franciscan University of Steubenville.

This year, three seniors are directing one-act plays as their final project for their degree. Starting last year, these seniors have been working hard in preparation for this massive requirement for graduation.

Continuing the theme of Shakespeare in the Anathan Theatre, senior Max Crean chose the play “Bill and Ben” by Richard James for his final project. The modern play introduces a new dynamic duo, William Shakespeare and Ben Jonson, to the stage. The curtain rises to Jonson in prison for murdering an actor in a duel, and Shakespeare visits him to help Jonson reconcile with himself and turn his life around. Told in colloquial terms, the dialogue is easy to follow and has its own mix of comedy and seriousness as the duo come to terms with Jonson’s sentence to death.

Being a fan of Shakespeare himself, Crean was naturally drawn to the play and its comedic aspects. “I noticed a lot of the one acts my predecessors tended to do were more serious, and I’m kind of more drawn to comedy,” said Crean. “It just seemed to be very well written … and was a blend of a lot of nice ideas that I really enjoyed.”

Crean honed in on Jonson’s character to decide the casting. “Jonson in particular is very difficult because he is so different from how most people would react … he’s very brash and sarcastic,” he said. “He’s … someone who is very gruff and serious, but he’s making fun of you the whole time.”

To up-and-coming senior theater majors, Crean advises them to enjoy themselves in the process but also to keep pushing themselves. “Never get comfortable in what you have already accomplished. Be willing to keep doing more and more, and you will thank yourself for that later,” he said.

For senior Maria Perez, the joys and challenges that came with the project have helped her to see her future. “At first I was really terrified, but … the more I’ve been doing it, the more I’ve been realizing ‘Oh my gosh! This is what I want to do! This is how I can help the world,’” said Perez.

One of the requirements for directing the one act is to create the production book that holds all the information on the play, from the senior’s analysis of the characters to the shopping list of supplies for the set. Perez said, “You have to know these things so that when you walk into rehearsal your actors can ask you questions like, ‘Well, what’s my motivation for this?’ and you know because you did the work.”

Perez chose the play “Eleemosynary” by Lee Blessing, a tender story of three women, a mother named Artie, a grandmother named Dorothea and a granddaughter named Echo, who learn to deal with their differences.

“Eleemosynary is a fancy word for ‘charity,’” said Perez. The play tells the story of reconciliation and redemption as the three women learn to grow closer to each other despite their differences and struggles. Dorothea has a stroke that leads Artie to come back with her daughter, and the three awkwardly find their way into each other’s hearts through the power of words, Perez explained.

Senior Sean Denton chose “Clara” by Arthur Miller, which is a fascinating murder mystery that taps into memory and acceptance of the past. The main character, Albert Kroll, discovers his daughter named Clara dead in her apartment and calls Detective Lew Fine. Kroll knows who the murderer is, but due to past choices and actions that occurred with Clara and her boyfriend, Kroll struggles to recall his name. Kroll and Fine work together to revive those past memories and put the pieces back together.

With all his hard work, Denton could not be more excited for the final production of the show. “Each rehearsal I’ve had so much fun working together with my actors and my stage manager to make this the best show it can be,” he said.