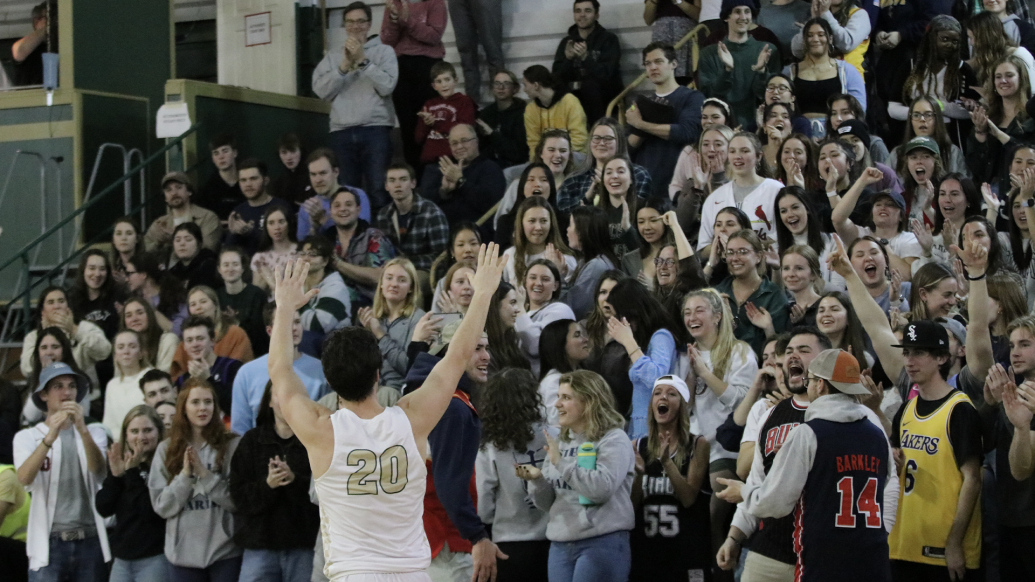 A single article is not enough to list all the athletic feats of Franciscan University men’s basketball player No. 20: Sean Hickey.

Chronicles on the Troubadour’s website of Hickey’s achievements on the court are plentiful. Articles including Hickey reach as far back as Feb. 6, 2018, when then-freshman Hickey was beginning to rack up points for his career record.

As of late, students have been mentioning Hickey’s name since he nabbed the No. 3 spot on the list of all-time highest scorers in Franciscan basketball history.

After 110 games, Hickey reached 1,679 points scored throughout his career, falling behind the top two who both achieved more than 2,000 points each.

“I am honored to reach that mark in my scoring career,” Hickey said. “I know that I am in good company on that list.”

Before this year, Hickey was sitting at the No. 6 spot for all-time scorers. He scored 489 points this season alone, the second-best scoring season in Franciscan basketball history. Also, he holds the single-game scoring record with 41 points.

Feb. 21, the Barons played against Bethany College, marking Hickey’s last home game. After scoring 16 points, Hickey overtook Jim Garrigan, who played in the 1970s, to claim the No. 3 all-time scoring rank and to cement himself in Franciscan basketball history.

The team’s most recent game on Feb. 22 against Chatham University ended in an 88-73 loss for the Barons. That was the end of the Presidents’ Athletic Conference Tournament for the Barons, but the men have a lot to be proud of.

It has been a long journey for Hickey in a relatively short amount of time. It may seem like yesterday that then-junior “sharpshooter” Hickey was interviewed by the Troubadour in 2019-2020 for the athlete spotlight.

Over that time, a lot has changed. Hickey said, “This is my fifth year in the program here at Franciscan. At this point, I feel like I have been around for a long time, and I have enjoyed it thoroughly.”

Hickey said he was granted a redshirt year, an extended eligibility period for play, due to the COVID-19 pandemic and its obstruction of collegiate sports in 2020. That means Hickey’s college basketball career has spanned five years, beginning when he was a freshman during the 2017-2018 season.

Hickey himself is a shooting guard, which he said includes “scoring, defense and leadership.” He has played basketball for as long as he can remember, starting in first grade and playing in YMCA leagues. Also, he has also forayed into baseball, soccer and football, but left to focus on basketball.

Hickey said, “Aside from practice with the team, I work out on my own in regard to shooting and ball-handling. I spend some time on these things everyday so that I can continue to stay sharp throughout the course of a season.”

However, there’s no “I” in team. Hickey is honored to play alongside his teammates, who he feels are like family.

“I have seen a lot of different individuals come through the program in my years,” Hickey said, “and I think that what we have right now has turned into a program that fosters hard work along with loyalty and trust toward each other.

“I love being able to … get away from the stresses that life has to offer. Basketball has always been a great outlet for me to do something that I love and that I am passionate about with guys that I genuinely care about and (who) care about my wellbeing.”

Over five years, Hickey said his favorite memory has to be a certain buzzer beater. He said, “We were playing a game at Pitt-Greensburg where we were down by two with a few seconds left and we were at the free throw line.

“We missed the free throw, got an offensive rebound and John Noce, our point guard at the time, got me the ball just in time to make a 3-pointer at the buzzer to win the game. That game clinched a playoff spot for us in the AMCC for the first time, and Pitt-Greensburg was an old rival of ours in that conference, so it felt good to beat them.”

Basketball has occupied much of Hickey’s time, but academics has been demanding as well. Hickey began studying accounting due to his interest in business and finance. He is studying business administration so that he can increase his credibility to hold management positions in the future.

After school, Hickey will move to Charlotte, North Carolina, to work at Ernst & Young, a professional services company.

Another focal point in life for Hickey, who’s patron saint is St. Anthony, is faith. Hickey said, “(Faith) is truly involved in everything I do, including basketball and academics. Personally, my faith is what gives me purpose and the ability to do the things that I am passionate about.”

In his spare time, Hickey likes to take things easy, golfing and hanging out with friends.