Scott Hahn speaks on importance of making disciples of all nations 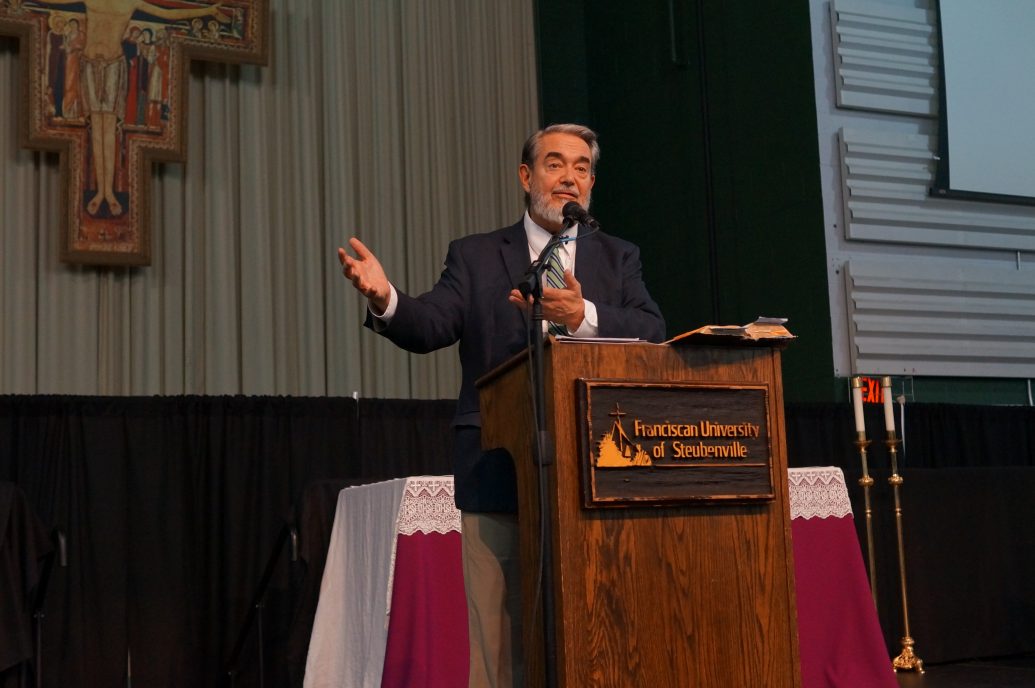 Christians must remember to honor God above all world leaders and live the Gospel by making disciples of all nations, said Scott Hahn at a talk in Finnegan Fieldhouse Wednesday, March 17, at 8 p.m.

Addressing around 60 students, faculty and staff, Hahn, who holds a doctorate in biblical theology, based his talk on his new book “It is Right and Just: Why the Future of Civilization Depends on True Religion,” which he coauthored with Brandon McGinley.

Hahn said that the entire world was meant to be evangelized in the name of Jesus Christ.

“The whole human nation is a family,” said Hahn.

As a family, it is the responsibility of Christians to lead one another to salvation.

“It doesn’t make sense to want to be a saint and disregard others’ sanctity,” said Hahn.

Hahn said the notion of true religion is misunderstood in the modern times.

“These days, even people who call themselves believers will describe themselves as spiritual but not religious,” he said. “Because religion is reducible to these different temporal, institutional, denominational structures that seem to come and go, that seem to divide, … You can be sincere and still be sincerely wrong.”

Everyone can come to know religion through the natural moral law, Hahn said.

“It is truly right and just, our duty and our salvation, not just mine, not just yours, but ours,” Hahn said. “Not just a person who is privately in prayer, but public. … The social order cries out to give thanks and praise to God.”

Hahn said that citizenship, according to St. Paul, is in heaven. There is also a social role on earth, but God will always be the authority over it all.

“He ascends into heaven to be the Lord of Lords and the King of Kings regardless of who won the last election or who will win the next one,” Hahn said.

Sophomore Catherine Burton said, “I liked how (Hahn) talked about how we all need to be disciples and should desire that everyone make it to heaven. And that’s why religion shouldn’t be just a private thing you keep to yourself.”

2021-03-21
Previous Post: Popular sports around the world
Next Post: FUSG says spring formal is in the works