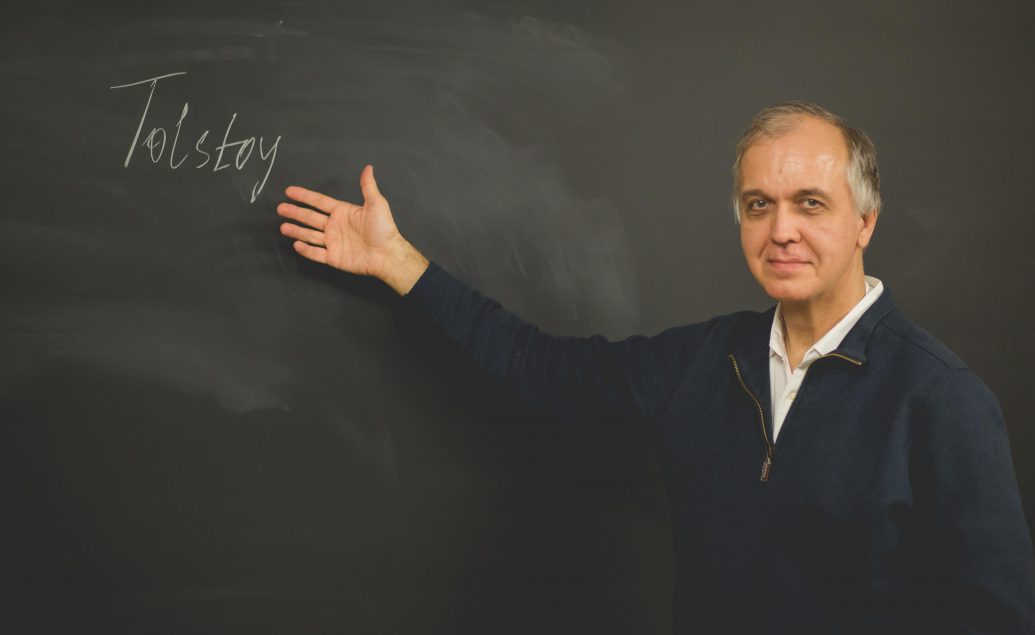 Igor Vishnevetsky – professor, novelist, composer – is a man full of stories, and not just the literary type. This is his first semester at Franciscan University of Steubenville, during which he has been teaching a course on Russian Literature, and he is truly a hidden gem on campus.

Vishnevetsky grew up under the Soviet Union in Rostov-on-the-Don, the biggest city in southern Russia. Born into a family of university professors, he swore from a young age that he would never become one.

“My parents either had their experiments and teaching or playing cards with their colleagues. And from my point of view, not paying enough attention to me. They paid enough attention, you know; I’m hugely indebted to them. But as every child, I thought it was not enough. … I also made a promise to myself … that I will never teach. And since 1986, I am a teacher.”

After graduating from the Moscow State University school of languages and literature, Vishnevetsky was assigned to teach for two years in the school system to repay the Soviet Union for his free education. His friends later urged him to apply for graduate school in the United States, as he was denied the right to apply in Russia “because I was a suspicious person. … Nonsense,” he said with a wave of his hand.

Having earned his doctorate in Russian literature at Brown University, he’s been in the U.S. ever since. Vishnevetsky has taught at schools all over the country, from an Eastern Orthodox seminary in Chicago to Carnegie Mellon University in Pittsburgh, where he lives now.

When he’s not teaching, Vishnevetsky is a writer, poet and novelist. “I think I developed myself into a very useful writer,” he said. Writing mainly in his native tongue, he has published six books of poetry and four books of prose.

He is also a filmmaker and worked with friends to produce a movie adaptation of his own novel, “Leningrad.” The novel, translated into English, Macedonian and soon Italian, is about the Nazi siege of the titular city during World War II.

Vishnevetsky said the theme of the novel is dehumanization, “because the war is a very extremely dehumanizing situation.” The siege of Leningrad was a “horrible event. More than a million people died. It’s the worst siege in modern European and probably world history. But again, the subject is not the siege itself but … how humans can retain our humanity in extremely dehumanizing circumstances.”

“The purpose is that of course our society in general always presents us with different challenges, and it’s easier to be not who we are but to go on the level, to go down to the level which is less human,” he said. “It’s more difficult to be humans than not to be humans.”

Incredibly accomplished as he is, Vishnevetsky didn’t begin in literature at all. When he was young, he aspired to be a musician, despite his parents’ wishes. “I would take music at the age of 10, and I already had Stravinsky as my favorite composer,” he said. “How many kids at the age of 10 have Stravinsky? It was an abnormal situation. My parents were horrified. They were seeing me developing into an avant-garde composer, and what would be the future for an avant-garde composer?”

He began composing music when he was 14 years old, “which I continued to compose when I was asleep for a very long period of time,” he said. The last time he composed was in a dream in 2009. “In my dream I composed Theme and 5 Variations,” he said. “I was able to write down Theme and One and a Half Variations, and then I stopped.”

He finally chose instead to study literature, but he often combines the two pursuits. He said, “My biggest achievement in music history is a 700-page biography of Russian composer Sergei Prokofiev. And after that I stopped having this pain about not becoming a musician. And the character in my first novel is a composer.”

Overarching all of his accomplishments is Vishnevetsky’s faith. An Eastern Orthodox Christian, Vishnevetsky enjoys being able to discuss faith and Christianity in his literature classes, and all of his experiences bring a new dimension to the literature for students.

“I think faith is important,” he said. “It’s like a certain spine that you have. … It allows you to see things in a different light. To be calmer in certain situations, to be stronger in other situations, to be able to not always judge other people, to look first at yourself. And I think it’s an important inspiration for my creative work.”

One feature article can only capture so much, so don’t miss your opportunity to take a class with him next semester! The man, the author, the legend – no one has stories like his.