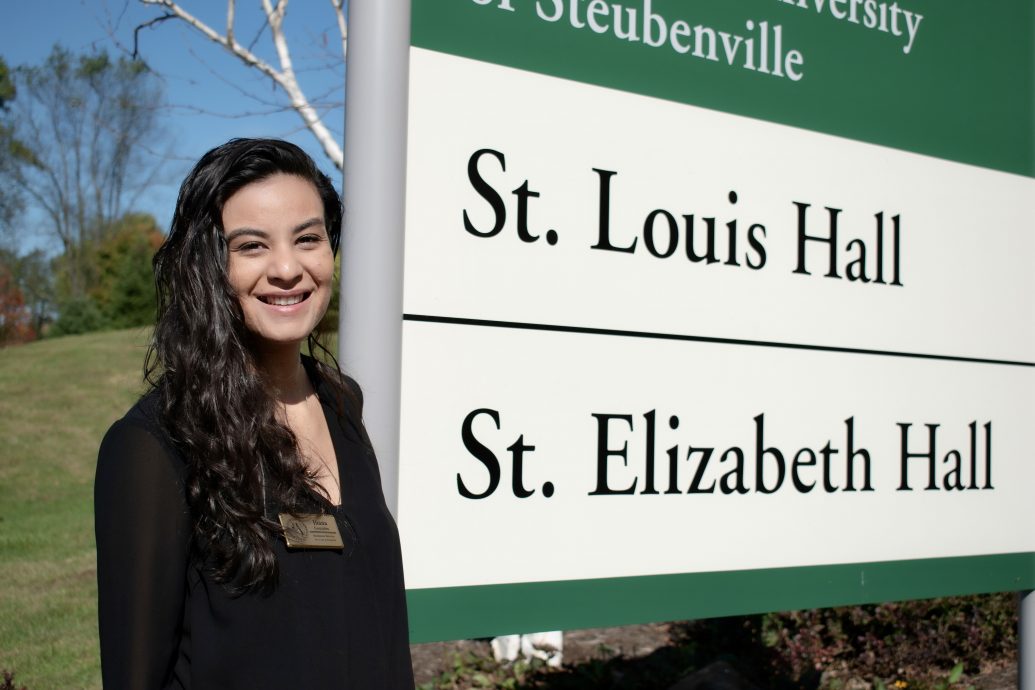 In January 2016, with three seconds left on the clock, then-senior Iliana Gonzales stepped up to the free throw line on the Baron’s home basketball court. The Lady Barons basketball team had played a stunning game against the No. 1 seed team, La Roche College, and the Barons were leading 74-69 when Gonzales took her two free throws.

The Rev. Sean Sheridan, TOR, and the Rev. Nathan Malavolti, TOR, were watching the game intently, and Malavolti cheered exuberantly for Gonzales in the silent Fieldhouse.

“Father Nathan was just cheering for me,” said Gonzales. “It was dead quiet, and I could just hear him. He was like, ‘Make this one for Father Sean.’ And then it went in, and he just started laughing and clapping.”

The Barons ended the stunning game 76-69, and this memory has stuck with Gonzales as a high point in her tenure at Franciscan University of Steubenville.

Gonzales first came to Franciscan as a sophomore transfer student in 2013, and she played basketball and softball while majoring in communication arts. She was also a residence assistant in Marian hall for two years. Though she graduated from the university in 2016, Gonzales’ Franciscan story does not end there. She is back now as both the residence director of Saints Louis and Elizabeth Halls and the assistant basketball coach of the team on which she formerly played.

“It’s like coming to Franciscan, round two,” said Gonzales.

Before returning to the university, Gonzales spent a couple years back in her hometown of Tucson, Arizona. Upon graduation, she worked at the Boys and Girls Club for two years. She then moved into a field more specific to her degree and worked for a year and a half as a graphic designer for the Diocese of Tucson. Then, as she said, “Franciscan knocked on my door, and here I am now.”

Gonzales was interested in being assistant coach to the Lady Barons basketball team, so when the residence director position also opened up, she was offered both positions.

Now, Gonzales brings her experience from her time here as a student to both the courts and the dorms.

On the courts, Gonzales encourages the ladies to be aggressive and disciplined. Since it is currently pre-season, the team has been going on 5:45 a.m. runs followed by 6:30 a.m. Mass.

“You don’t see other teams at other universities going to a FOP (Festival of Praise) or going to daily Mass after their run at 6:30 in the morning. It speaks a lot about how unique Franciscan is,” said Gonzales.

Gonzales incorporates faith not only into basketball but also in her role as residence director. Prayer, especially, is a big focus for her, and she starts every staff meeting with a holy half hour.

“It’s ultimately to prepare ourselves and open up our hearts to the residents of this hall — and every resident that we interact with in the university,” she said. “How we give ourselves, how can we be a resource, how can Christ go through us so we can in turn go to you guys as the residents.”

“Obviously, the faith is very important here. … Everything that Father Dave Pivonka is bringing back is something I want to incorporate and resonate throughout the halls,” Gonzales said. “That’s the same mentality I had as an RA and now as an RD: building relationships, being involved with the residents, as much as possible. Just help them grow, ultimately, closer to Christ, which is our number one goal here. And then help them go out into the real world and … pass that on, from what they learned at the university.”

Gonzales is looking forward to being a servant-leader and getting to know people in her new university roles. So far, she said, the relationships have been the best part of being back. Whether on the courts, in the halls or anywhere about campus, Gonzales is looking forward to meeting new faces and getting to know them individually so she can best serve them.

“Fun fact: I like Mexican food, because I’m Mexican, and if they want food, they can come over anytime, and I can make them that. … I just want to be there to serve anybody, everybody,” said Gonzales.