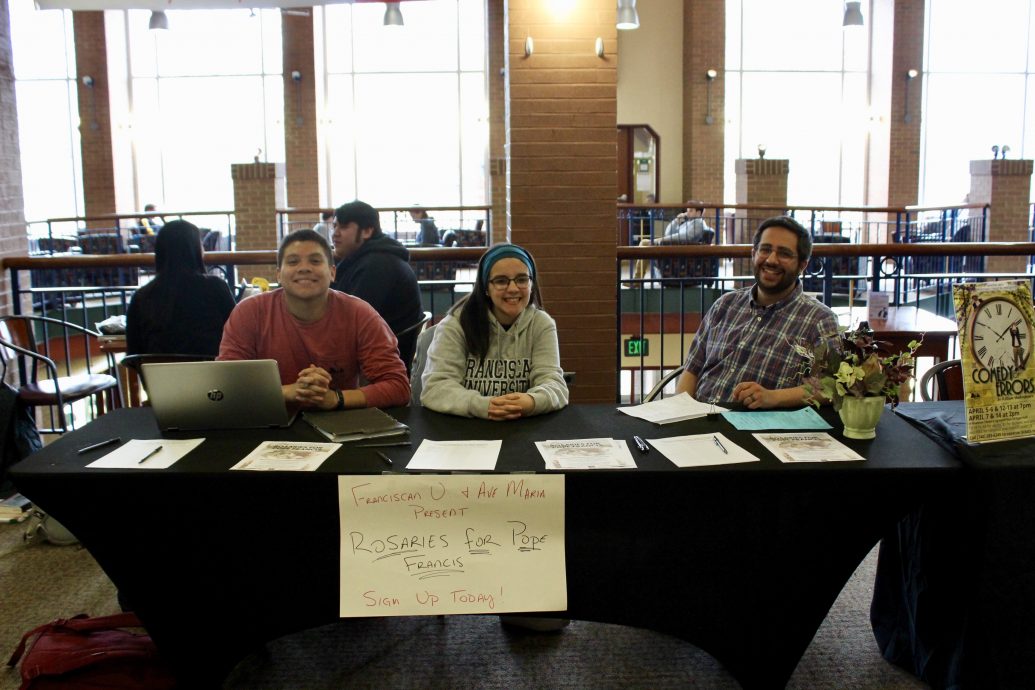 Students at Franciscan University of Steubenville and Ave Maria University are coming together this Lent to present Pope Francis with a spiritual bouquet of rosaries prayed for his intentions.

The residence life staff (ResLife) of Sts. Kolbe and Clare Residence Halls has been in charge of organizing and promoting “Rosaries for Pope Francis” on Franciscan’s main campus in the hopes of involving as many students as possible.

Junior Gabriella Hollendonner, resident assistant in Kolbe and Clare, said that when the universities came together to plan the initiative it made a lot of sense to make a combined project “with two very Catholic … very wholesome universities coming together.”

During the Triduum, a representative of both universities will travel to Rome and present Pope Francis with a letter explaining the spiritual bouquet and declaring how many rosaries were prayed for him by the students from Franciscan and Ave Maria.

To spread awareness and gain pledges, resident assistants from Kolbe and Clare have been and will continue tabling in the J.C. Williams Center from 12:30-3:30 p.m. on every Lenten Tuesday until April 16, which is the last day to pledge a rosary.

Hollendonner said, “We’re not selling anything, so (people say), ‘Oh, I just need to pray a rosary? I can do that!’”

The initiative has also been promoted with fliers posted around campus and at various events.

As of April 2, students at both universities had pledged to pray over 2,000 rosaries for the intentions and wellbeing of Pope Francis.

Hollendonner said, “People have really opened their hearts to … totally giving their time to pray.”

“I think it’s a universal concept that the world is kind of going through a hard time right now, and the pope has a lot on his hands, and he needs as many prayers as he can get,” Hollendonner said.

What better time than Lent — when Catholics are called to increased prayer, fasting and almsgiving — to pray for the pope?

Students and faculty members can pledge their rosaries online at www.rosariesforpopefrancis.com.