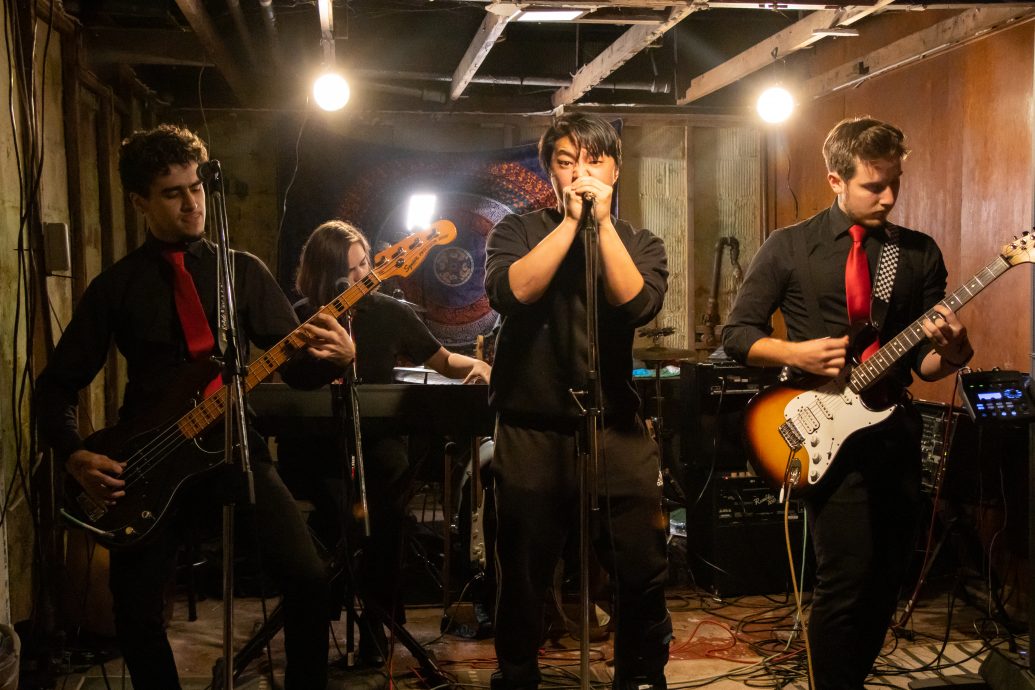 Two household brothers were on a video call over summer 2021, playing music to each other, when one of them started playing “Superman” by Gold Finger. That’s when they had an idea to start a band based on playing that song.

“We never played that song, but we did form the band,” junior Chris Dacanay said.

Dacanay, who plays the drums, and lead singer junior Ben Hooper, the founding members of The Last Rebellion band, advertised at the beginning of fall 2021 to find interest for their new punk rock band.

The band members enjoy the community they’ve built and the practices and performances they have together. They are continuing to expand their repertoire with performances and writing original songs.

The name of the band came from Hooper and Dacanay “spitballing” ideas.

“After like 20 different rejected ones, we finally came up with the Last Rebellion because we thought it sounded cool and edgy,” Dacanay said.

Dacanay designed the logo, which is a half skull, half man in a helmet.

“That’s sort of a motif we’re trying to get into, is the camouflage, rebellion kind of thing, but right now we’re just wearing black,” he said.

The group is unlike other musical groups at Franciscan University of Steubenville. At their first concert in the Saints Louis and Elizabeth Hall March 6, two of the members wore dark eyeliner as part of their costume effect.

“You don’t see like five people walking around campus in eye-liner,” Lai said, who wore the makeup along with Poirier. “Actually, you only typically see two because three of your band members bail on you.”

Poirier said, “It’s very what you’d expect from punk rock bands. It’s what we have going on for the time being, but we are tossing around ideas for different outfits we can wear for performances. … It’s up in the air right now.”

At their first public appearance, the Last Rebellion performed an original song by Lai called “Consciousness,” which Dacanay said was well-received.

They are experimenting with another original work, which will be completely, if not mostly, in Spanish, Dacanay said.

The Last Rebellion plays songs outside of most of the popular music genres on campus. Some of the biggest songs they have performed are “Boulevard of Broken Dreams” and “Give Me Novacaine” by Green Day, “Harder to Breathe” by Maroon 5 and “Tear in My Heart” by Twenty One Pilots.

At their second performance that was off campus, Poirier said preferences changed.

“When we went outside campus, a lot of people’s tastes were different; people seemed to enjoy other songs, as opposed to what the Franciscan crowd enjoyed more.”

The band usually practices on the weekends in the George Rice Music Center. Leading up to each performance, they have crammed in multiple hours of practicing.

“All of us, especially Nathan, lived in the George Rice Music Center for a week,” Dacanay said.

Dacanay said that part of the band’s goal is working toward expanding the music community and culture at Franciscan.

“All of us are creative people, musically inclined, and we have a good time playing together,” Dacanay said. “There are musicians on campus, but it’s all really pretty disparate. There’s no concerted movement to have shows and have a community of musicians, especially not in terms of big bands that are kind of showy.”

Hooper agreed with Dacanay and said while Franciscan has a flourishing music community, there is no opportunity for students to enjoy live music on a regular basis.

“I think the next step is opening the door for people and just kind of bringing groups in with us,” he added. “I know a few people that play, but they don’t have the opportunity to play that much.”

Hooper would like to initiate outdoor fall and spring festivals that have live music and barbeque, potentially to be sponsored by households or clubs.

“It could be a good way for households to get involved and be more seen,” he said.

The Last Rebellion plans to do one more public performance in the Piazza dei Santi before the end of the semester. In the meantime, they will continue to have a good time practicing and making fun of their lead singer’s chronic lateness.

“It’s a fun time,” Dacanay said, “and it’s nice to see people come out to shows, and, even if they’re not dancing and pushing each other around, it’s still fun to give them something entertaining to watch.”