Professor pontificates about faith in careers over pints 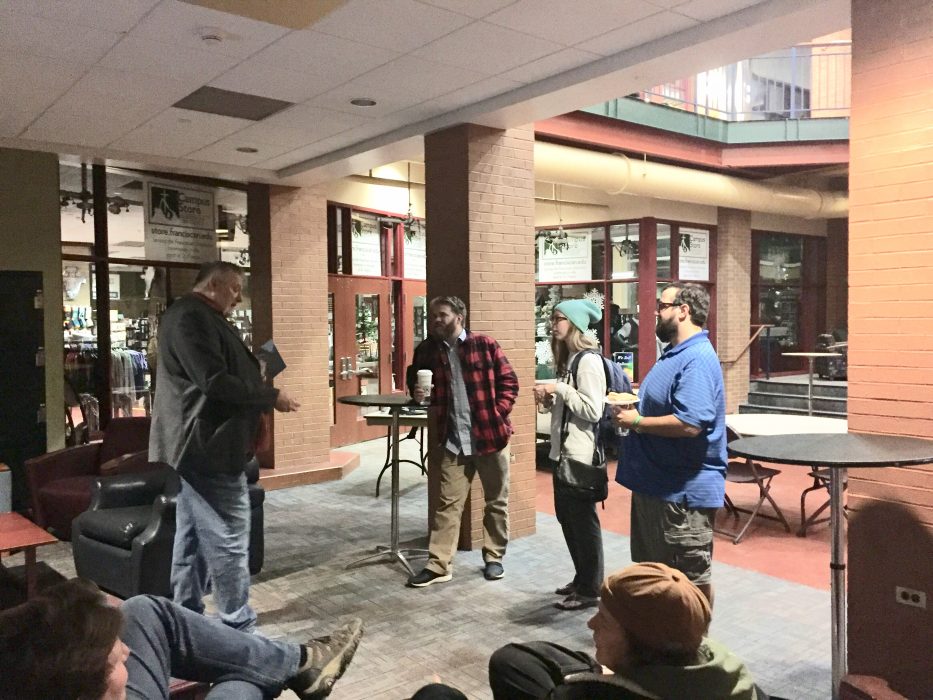 The J.C. Williams Center rang with laughter as a professor shared stories of his life and offered advice about faith and careers to students while they partook of free food and beer Wednesday night.

John Walker, who holds a master’s of fine arts in acting, spoke at the first Pints with Professors, hosted by Exc!te.

Walker spoke about his experiences in Hollywood, his wife and family and his conversion — with many jokes and stories throughout.

“So, I’m supposed to tell you about life,” Walker said. “You’re born, you die and there’s some other things that happen.”

Walker joked that during his time in Hollywood he was too tall to be cast in any acting role. A friend offered to help him get a job in a club as a bouncer, Walker said, but his aversion to fighting made him nervous.

“Everything in my body is kind of this fever sweat,” Walker said. “I can’t be yelled at by a person over a parking spot, and my knees started to shake. … But then it occurred to me that it’s the best thing I could do. Go into a situation where I have to deal with confrontation all the time and then I would maybe get used to it.”

Walker took a more serious tone as he described his time living in Vermont and the religious oppression he faced there and in other jobs.

When he worked at Vermont State College as a theater teacher, he had an icon of Mary and a rosary stolen from his office, Walker said. He was called to the president’s office and was told that they removed his “offensive religious symbols.”

The president asked him to host an event on intimacy with LGBTQ+ partners, Walker said.

“I didn’t do it,” Walker said. “I went and saw … 10 minutes of it and realized I made the right choice. And the next day in the theater, we showed the Passion of Christ for 24 hours straight; then I got fired.”

Walker said he auditioned for a character that he later learned would operate a strip club.

“(I thought,) I can’t do that and, years from now, (I) look at my son and say, ‘Hey after we watch my old scenes in “Boardwalk Empire” let’s go talk about theology of the body,’” Walker said.

Walker discussed his conversion and how his prayer life led him to new jobs.

“I just look down the row,” Walker said. “I got a healthy kid, healthy kid, healthy baby, wife who loves me … (and) stuck by me for all this time. … I’ve got a debt to pay to a landlord who will never ask for a penny. … And I came into the Church then, because I realized I was blessed, and I was loved.”

After moving back to New York once again, Walker totally surrendered himself to God in prayer.

Nine months later, Walker ran into a priest and heard about a job opening at a monastery, farming and hosting retreats. Walker referred to this job as the child of his prayer.

When Walker concluded his life story, he opened the floor to questions.

Walker was asked about his thoughts on Christian media and how to be a good artist.

Walker said by being a good artist first, your Catholic identity will show in your work. He contrasted this by joking about the “God’s Not Dead” franchise.

“Be a good artist first as a Catholic who can’t help but be a Catholic artist.” Walker said. “That’s the problem with the evangelical movies. … ‘God’s Not Dead 6’ is not trying to be good art, it’s trying to preach. You’re in the human drama … take direction from God,” Walker said.

“He spoke of masks that people have, that break down when we make someone laugh — because we can’t really hide our true laugh,” Richardson said.

Pints with Professors provided students with drinks and snacks free of charge. Pizza sandwiches were provided by Belmonte’s Pizza and beer was served to those over 21.

The first 50 students to arrive were given commemorative pint glasses decorated with the event’s logo.