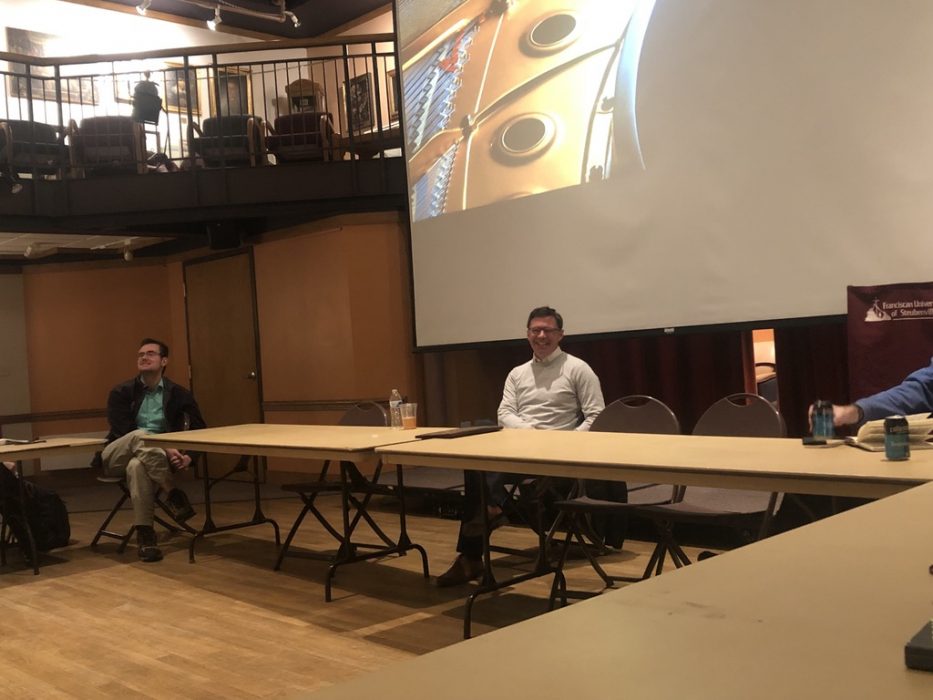 Robert McNamara, who holds a doctorate in philosophy, opened the “Philosophy on Tap” event by explaining to the full audience in the Gentile Gallery that gender roles in society are best understood from the perspective of vocation.

“Vocation is understood as a call, as something initially, primarily positive,” he said. “The call that comes to us is a determination of our nature — male and female. And that call is realized in what we have come to understand as gender.”

McNamara said gender needs to be understood according to the complementarity between men and women.

“We have a unity of humanity before we have a duality of sex,” he said. “Men and women are more alike than they are different.”

Since family is the fundamental unit of society, once the role, call and vocation are understood within the family, it can then be implemented in society as well, he said.

McNamara said gender is a gift to be rejoiced in.

McNamara said it is difficult to rejoice in what it means to be male or female, as there is much confusion in modern society, particularly among youth, about gender and its roles.

He said the best response is to take joy in what it means to be male or female and to embrace the responsibilities that come with those roles.

“Gender roles in society ought not to be constrained but rather liberated,” he said.

During the discussion period that followed, one student asked how to deal with the issue of women being measured in society by a “male metric.”

McNamara said a woman should enter society in an authentically feminine way without leaving her role as wife and mother out of it.

Another person asked if there is something fundamentally masculine about careers.

McNamara said while a woman’s role in society will be different from that of a man because of her different role in the family, “a woman ought to be able to play out her perfect role in society; we ought not to constrain her.”

Senior Sophia Fernandez, resident assistant in Assisi Heights, introduced the event, and free beer was provided to students of age.

McNamara said “Philosophy on Tap” events are also held on the Austrian campus and that these allow for discussion on topics that are not covered as inclusively in class.

“Dr. McNamara had wonderful insights and a very welcoming presence,” she said. “The beer was also incredible.”

The event was presented by Assisi Heights Residence Life.