People party in pajamas for return of annual event 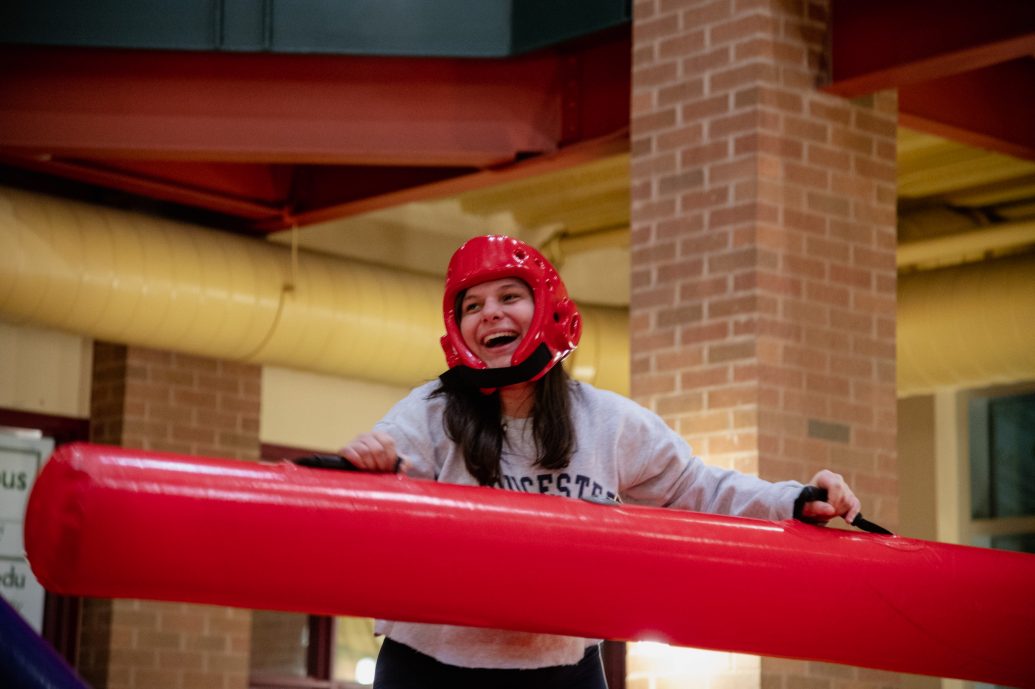 Campus saw the return of Pajama Rama this semester as students flocked to the J.C. Williams Center Friday dressed in pajamas for a night of free food and games.

Pajama Rama, hosted by Exc!te, returned this year with more activities than previously. In addition to inflatable jousting, sumo wrestling and a Twister tournament, the event also included foam ax throwing, a high striker and a photo booth.

The event was catered by Biscuit World, which provided students with a variety of breakfast sandwiches. There were also free ice cream sandwiches and popsicles.

The high striker was a crowd favorite, with students lining up to take a swing with the mallet and the bell ringing all night long.

A Twister competition began in the Gentile Gallery at 9 p.m. Students were invited to try their hands — and their feet — at being the last one standing in a tangle of limbs for a prize of a $50 gift card. After 40 minutes of contortion, sophomore Sydney McMahon was victorious.

The jousting also saw long lines through the night with pairs of students waiting to try and knock each other off of inflated platforms. The student who remained on the platform for two out of three rounds was declared the winner.

Ax throwing, a new addition to Pajama Rama, had students flinging foam axes at a Velcro target in the International Room.

Another returning event was sumo wrestling. Participants suited up in fat suits and hurled themselves at each other, trying to force their opponents out of a circle. This was also a best two out of three match.

The photo booth provided many challenges through the night. After technical difficulties at the start of the event, it was operational for around an hour and a half before running out of paper.

Junior Craig Sheperdson, Exc!te’s vice president of events and logistics, enjoyed the chance to attend an event in his pajamas.

“The Pajama Rama is the best excuse for short shorts in public since the 70s,” Shepherdson said.

Junior Robert Stephens attended the event and enjoyed spectating all the activities.

“I got to watch a bunch of people make fools of themselves, and it was hilarious,” Stephens said.

Exc!te meets every Wednesday at 11 a.m. in the St. Margaret room to plan events on campus.