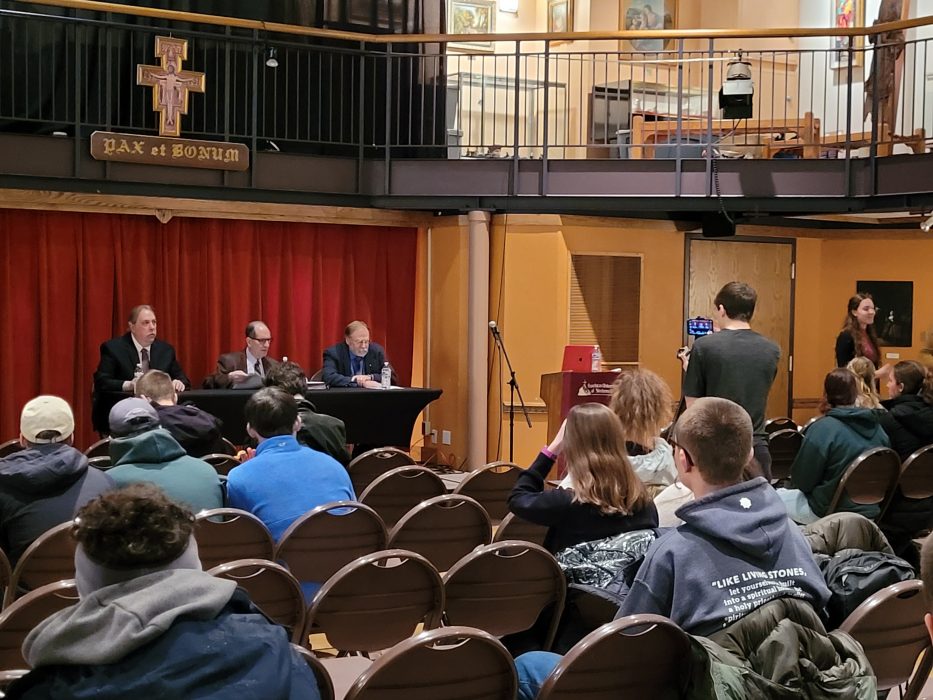 Three Franciscan University of Steubenville faculty members held a panel discussion about the first year of Joe Biden’s presidency for students in the Gentile Gallery Monday.

Freshman Gia Smith, president of the Political Science Association at Franciscan, opened the event in prayer and introduced the speakers.

The event was largely critical of Biden’s administration.

Nemeth said the president has a lack of regard for the rule of law. He cited Biden’s rebuke from circuit courts of appeal and from the Supreme Court.

“It’s his general policy of antagonism toward the previous administration,” Nemeth said. “As Aquinas tells us over and over, change should not always happen in law; change should be slower in law than in other institutional aspects of any systems.”

“Theodore Roosevelt … said he would commit to ‘speaking softly and carrying a big stick,’” Kempton said. “I believe President Biden has his own version of this axiom, which is something like ‘speak loudly and carry a Nerf gun.’”

Kempton said that regardless of thoughts on whether America should have been in Afghanistan in the first place or not, it must be examined through the lens of the Catholic teaching of just war.

Krason said the president is pushing false claims of discrimination in voting rights that compromise the traditional power of the state to run elections. Krason also said Biden’s administration is trying to force Catholic doctors and hospitals to compromise their morals.

Smith opened the floor to questions from the audience, beginning with a question from the Political Science Association about Biden’s campaign promise of uniting political parties.

Krason responded and said the Democrats’ worldview is in opposition to sound culture and ethics.

Students asked a variety of questions about the ramifications of Build Back Better, China, Russia and COVID-19.

Freshman Luke Roesener said he agreed that the Biden administration is not moral.

“We need to focus on the fact of morality,” Roesener said. “We have to do what we can to show our stand and say, ‘this is unacceptable.’”

The talk was hosted by the Political Science Association.