Panel discusses effects of genetic enhancement on the human person 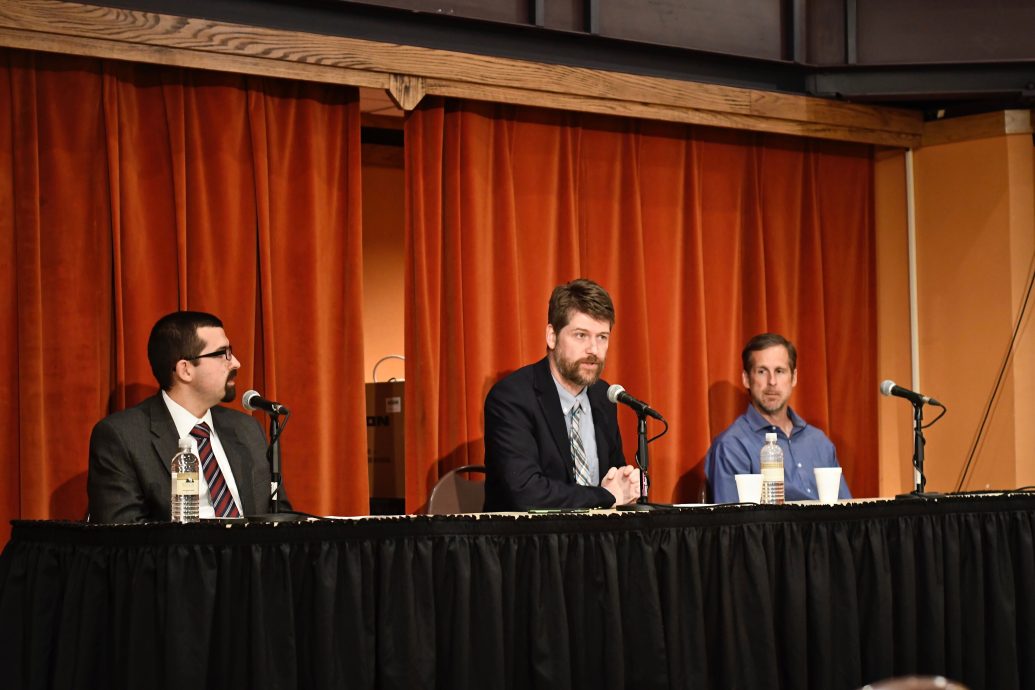 A panel discussion on transhumanism brought together scientific, philosophical and theological perspectives on the human person at the first presentation of the 2019 Academic Lecture series Friday, Sept. 27 in the Gentile Gallery.

Students filled the Gallery to listen to three professors explain their fields’ approaches to transhumanism, the use of technology to overcome human limitations.

Daniel Kuebler, the dean of the school of natural and applied sciences at Franciscan University of Steubenville, spoke on the biological aspect of transhumanism. He explained the two focuses of the scientific movement are genetic enhancement and neurological enhancement.

Genetic enhancement aims to change a person’s gene lines, which involves modifying human embryos genetically. For example, Kuebler explained, one recent experiment was to remove a gene essential for contracting the HIV virus in order to make the person resistant to HIV. However, the people with this genetic change have a 10-15% shorter life span.

“There is a cost all the time when you are doing some type of genetic modification,” said Kuebler.

Neurological enhancement involves augmenting the brain with technology, such as through the development of a drug that helps people focus longer.

Paul Symington, who holds a doctorate in philosophy, spoke on the ethics of the topic. He said transhumanism tends to hold that human enhancement outweighs any moral or societal ills it may produce. It also risks falling into consequentialism, wherein the only priority of an action is the outcome.

Although it may be ethical to pursue human enhancement in some areas, Symington ultimately explained, “We are not supreme or good enough to direct the evolutionary process for human beings. God with his wisdom and through his directive means must be trusted with the ultimate enhancement for human beings.”

To bring in the theological perspective on the topic, Jacob Wood, professor of theology at Franciscan University, explained that in the hierarchy of creation, everything has its place and is beautiful there. When that relationship gets broken down, the harmony in creation is disrupted.

It’s the same way with the human person, Wood said. Thus, anything affecting the person’s body will also affect his soul and the harmony or disruption between the two.

Wood said when examining the topic of transhumanism, people must ask themselves, “When we enhance the body, are we also enhancing the soul? Are these bio enhancements going to make us more virtuous?”

Freshman Reyna Staton said she thought the talk was “very informative as I didn’t know what transhumanism was. They also gave good insight in the difference between healing and enhancement.”