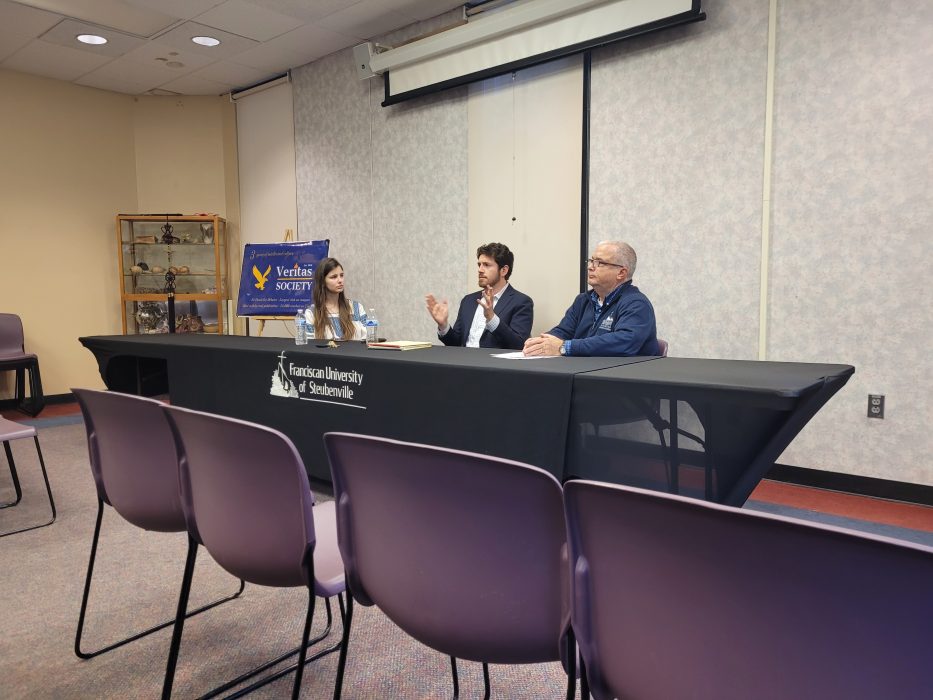 Vladimir Putin is unhinged, and all countries need to be careful, said a Franciscan University of Steubenville student who recently returned from Ukraine.

Junior Sophia Charron moderated a panel discussion Thursday at 5:30 p.m. that discussed the history of Russia and Ukraine and the misinformation the Russian president is spreading about the current war.

Charron was joined by Mykola Murskyj, a former analyst with the U.S. Department of Homeland Security, and Ron McNamara, coordinator of Franciscan University’s Student Leadership Development and a foreign policy advisor to the U.S. Senate in the 1980s.

McNamara said Ukraine, despite its time in the Soviet Union, was a distinct nation, dating back to the introduction of Christianity in the area.

Murskyj agreed and said Russia always made attempts to suppress Ukrainian culture and language while they were part of the Soviet Union.

He then introduced the first part of Putin’s misinformation. Murskyj said Putin claims to be in Ukraine to eliminate Nazis.

Charron said there is not a Nazi problem in Ukraine. She pointed out the fact that Ukraine has a very small group of far-right activists, some of whom ran for parliament in 2016 and did not win a single seat.

Murskyj also pointed out that Ukraine had many Jews in positions of power.

“It’s the only state besides Israel that had both a head of state and president being Jewish,” Murskyj said.

The discussion moved to Russia’s violation of treaties and legal agreements.

McNamara pointed out that Russia agreed to recognize Ukraine as a sovereign nation in 1975 as part of the Helsinki Accords, a claim that Putin has contradicted in his statements on the current war.

Charron said another part of Putin’s misinformation is his statement that Ukraine is becoming more “woke” and that Russia is defending traditional values.

Regardless of this statement, Russia is not in a place to speak about traditional values, she said.

“You can’t support a regime that stands with Hassad and Syria,” Charron said, “with … nations that perform atrocities on their own people.”

After that, Charron opened the panel up to questions from the audience.

The first question dealt with Putin’s motives attacking Ukraine instead of other Eastern Bloc countries.

Murskyj said Putin is motivated to discredit democracy in order to keep his own people in check in yet another misinformation campaign.

“When you’re afraid of your own people, you have to find an external enemy,” Murskyj said.

After some questions on NATO, Charron brought the conversation to the popular phrase “close the sky.”

The panelists all agreed that, while Ukraine could handle a ground war, they are outclassed in the sky.

Murskyj said that the West can get involved, but they must be careful.

Charron said, “There are sneaky ways of doing this, but it’s just a risk calculation on the part of the West.”

The talk ended with the panelists pointing out the irony of Putin’s actions.

They said some border cities in Ukraine were very pro-Russia until these recent events.

“This has been maybe the most unifying event in Ukraine’s history,” Charron said, “at least since its independence.”

Junior Francesco Pinque attended the talk and said it was helpful in discerning the truth of the situation.

“It was good to hear people with experience talk about this matter in order to discern what the truth of the matter is,” Pinque said.

The event was hosted by the Veritas Society.