One year later: the blizzard that couldn’t stop the March for Life 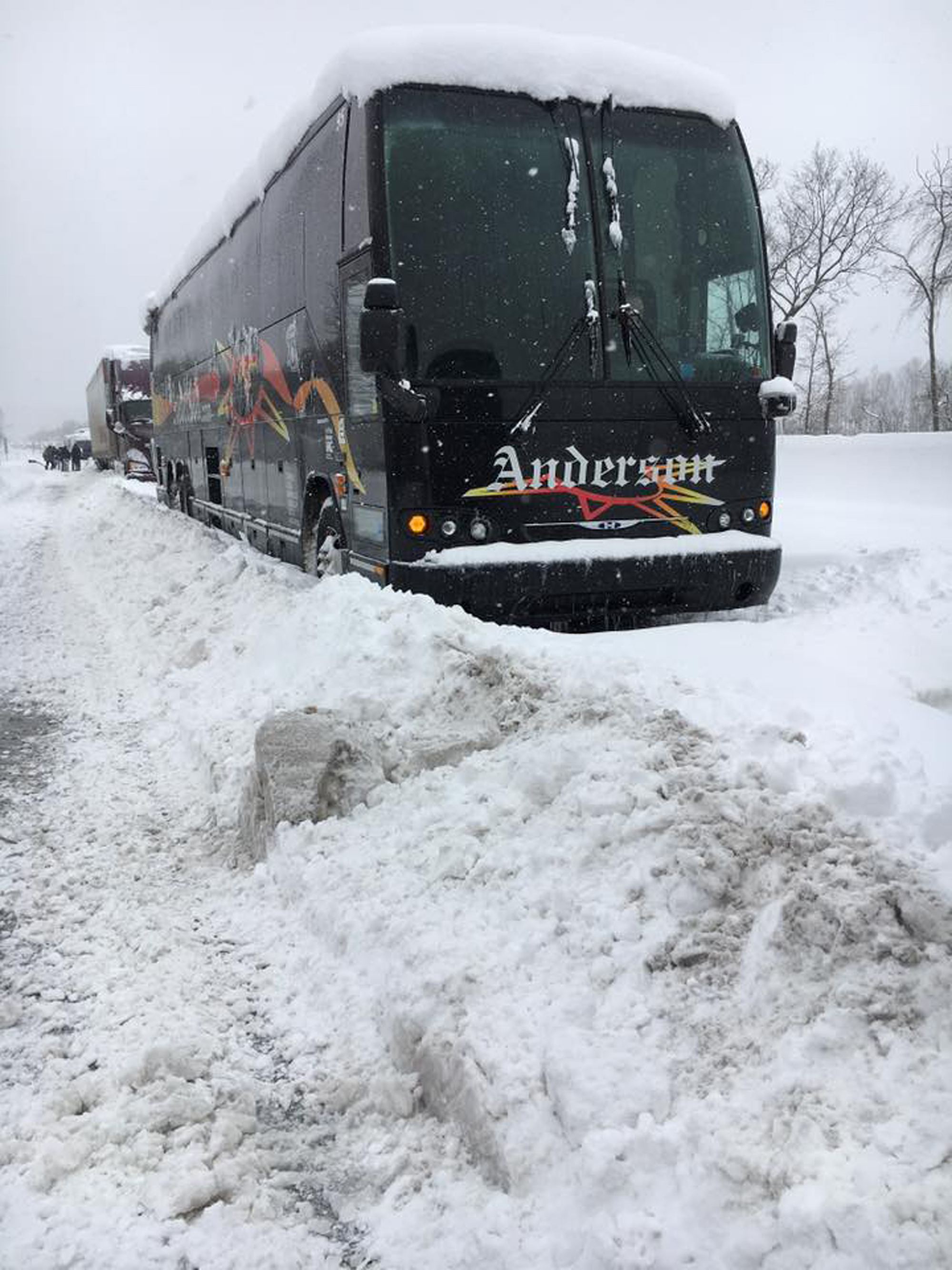 Students reflect on small rations of food, snowball fights, and 32 hours spent in buses on the Pennsylvania Turnpike after a blizzard brought traffic to a standstill January 23, 2016 after the March for Life.

Last January, hundreds of students from Franciscan University, despite severe weather warnings, traveled to Washington, D.C. for the annual March for Life. With warnings of a massive storm, attendance was down in 2016 for the annual pro-life event, but many intrepid students still braved the weather to travel to Washington, D.C. What resulted was almost three days spent stuck in close to 20 inches of snow in buses along the PA turnpike.

Students reflect on their decision to go, despite the weather, and their experience on the bus.

Although it was her first year going on the March for Life, junior Julia Jiménez agreed to be a bus captain, in charge of keeping track of students on her bus.

Jimenez said that she was excited for the opportunity, since she came from Southern California, going with Franciscan was the first time she’d had the chance to attend, and she was looking forward to being part of such a huge movement.

Jiménez said she started to hear about a blizzard coming, but rather than deter her, the possible snowstorm appeared as an obstacle to be overcome.

“I thought that would really make a difference and change the view that people have of this movement in general,” said Jiménez. “It makes people think, ‘wow, this is a powerful movement that these people are showing up anyway, in spite of all the discouragement.’”

Jiménez said she had a positive view of her time stuck on the bus and, compared to people stuck alone in their cars, she felt blessed, as she and the others on her bus had heat, food from the National Guard and even a T.O.R. friar to lead them in prayer.

Sophomore Jim Mello found himself stuck on the Pennsylvania Turnpike with a bus full of students he barely knew, relishing the chance to eat peanut butter crackers and Cheese Whiz.

“When the National Guard brought the MRE’s to us, we didn’t have enough for everyone to get their own, so they decided to auction off each individual item,” said Mello. “When they got to peanut butter crackers and Cheese Whiz, no one had any interest in that, but we were like, we’ll take them. We just feasted on crackers that had like three thousands calories of peanut butter.”

Mello said he would have liked to have had dry clothes last year after a snowball fight outside the bus and he would plan accordingly for this year.

Luke said, “Being stuck on a bus on the Pennsylvania Turnpike for (32 hours) was actually one of the best experiences of my life.”

That doesn’t mean it was easy, said Luke. But rather than complaining, most of the students were concerned for the others on the bus, as they did “absolutely nothing other than pray and talk to people and spend time together,” said Luke.

Luke said that he not only made new friends, but he also gained a greater appreciation for the pro-life cause.

“It’s eye-opening to see you’re not the only one in this movement,” said Luke. “It’s a huge movement. I mean, you look in the media, social media, and it’s very easy, I think especially easy for younger people, to feel they’re alone in this movement. I think the March for Life is a wonderful thing because it allows all the pro-life individuals to see they’re not alone.”

Jiménez said being stuck on the bus was an exercise in trust.

“It was amazing because we just go in trusting in God,” said Jiménez. “You know, we hear there’s going to be a blizzard, but He’ll take care of us, especially for this cause, defending His will and His word.”

As the 2017 March for Life drew closer, the question on everyone’s mind was whether they were willing to go, even after last year’s blizzard. For Luke, the answer was easy.

“Even if you told me: there’s going to be another 20 inches of snow and you’re going to be stuck for another 24 hours, I’d still go,” he said.

Both Mello and Jiménez said the same.